A visit to George Wigley’s workshop at Monastery Stained Glass was always full of unexpected discoveries. The sensory overload of jumbled fragments of stained glass was an exhilarating experience. From thirteenth-century borders to seventeenth-century Swiss armorials,
fifteenth-century heads to Victorian pressed glass, there was always something to attract the eye amongst the bewildering array of boxes and trays of broken glass.

On one occasion about 5 years ago, a number of damaged fifteenth-century English quarries were on the bench (fig 1). It is believed that a small number of complete quarries of this pattern were sold via Ely Stained Glass Museum around this time, although these were not photographed. They were possibly acquired from Kings of Norwich.

The quarries are slightly larger than typical, at approximately 120 x 215mm, made of a green tinged cylinder glass with variable corrosion. The unusual feature of these is that, in addition to the central stylised barley ear motif, they had a bold border, featuring a jagged tooth design. The teeth appear to align across quarries (fig 2).

Have readers come across similar quarry border designs and can a possible provenance be postulated for them? In addition, if any readers have further examples, they are encouraged to
get in touch with Simon Thomas via transfers@oldtimeworkshop.co.uk 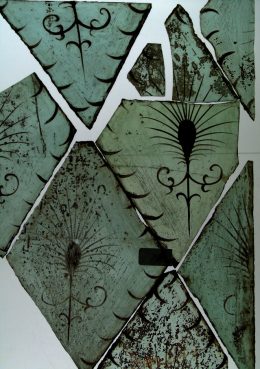 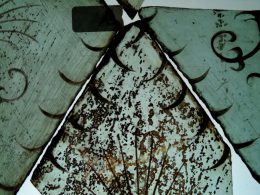