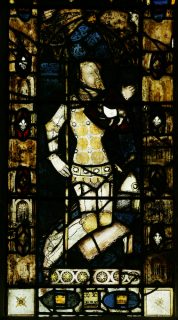 The late medieval parish church at Bardwell (Suffolk) is undergoing an urgent programme of restoration work, to combat the effects of water leaks and crumbling masonry. Fundraising, beginning in 2017, has raised more than a quarter of a million pounds to fund the restoration.

The church contains traces of a range of fourteenth-century wall paintings, whilst at the north-east end of the nave is a pair of windows containing fine examples of fifteenth-century stained glass. One panel (Fig. 1) contains a representation of Sir William de Bardeswell (d. 1434), clad in armour and kneeling in prayer, who, together with his wife, was a major benefactor of the church, responsible for much of its current appearance.

The medieval glass will be temporarily removed from the church during the restoration work, which is expected to continue until February 2020.