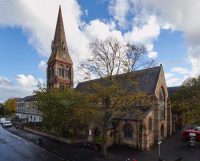 The West window of St Matthew’s Church, Anlaby Road, Hull was removed from the building for safety under emergency measures in 2015, following the closure of the Church for worship in late 2014. The window had previously suffered badly from vandal damage, and was held in storage while the Grade II listed building was offered as a “unique redevelopment opportunity”. In 2018, new owners Giroscope, a housing charity in West Hull, commissioned Barley Studio to restore the window, with support from the War Memorials Trust and The Worshipful Company of Glaziers and Painters of Glass.

St Matthew’s Church was built by architects Adams and Kelly of Leeds and consecrated in 1870. The substantial building, with its tower and spire, is an iconic landmark building in the local area (Figure 1), and the West window in particular has great significance to the local community, being a memorial to those who lost their lives during the First World War. The window is a major ensemble, comprising 46 separate panels and measuring approximately 6.5m high and 3.5m wide overall. Made by John Hardman and Company of Birmingham, the window was unveiled and dedicated by the Bishop of Hull on 4 July 1922, along with two tablets listing the names of 138 members of the congregation of St Matthew’s who were killed in the Great War 1914-18. An inscription stone on the outside wall reads “The window above is in memory of our dead through whom we live”.

Barley Studio’s accredited conservator Alison Gilchrist was commissioned to report on the condition and significance of the window while it was still in storage, to inform decisions as to its future. She found that although the window had previously sustained much damage, especially to the lower register lights, a high proportion of original material remained and was in very good condition. Important areas of the imagery, such as the faces of the figures, were all complete and largely intact. The painted detail was in excellent condition, and the leadwork remains strong. All of the surviving glass, paint and lead appear to be original to the window. 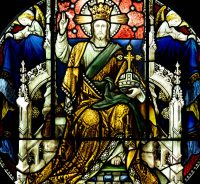 Alison also recognised the significance of the window as a war memorial. The lower register of four lights depicts two members of the armed forces, army and navy, in the two centre lights, flanked by four female figures in the outer lights (Figure 2). The female figures are depicted in the manner of the Virgin Mary (to the left) and Mary Magdalene (to the right) at the Crucifixion. Behind each is a female companion acknowledging their suffering, and, by extension in this context, acknowledging the suffering of all those who watched their sons and loved ones go off to war. Placing the servicemen in place of the Crucifixion pays tribute to the ultimate sacrifice made by so many during the Great War.

Angels behind the servicemen gesture upwards towards the depiction of Christ in Majesty in the octofoil window above (Figure 3), showing that their sacrifice has not been in vain. The central circle is surrounded by eight lobes containing musical angels and, at the base, the book of the Apocalypse with its seven seals opened. 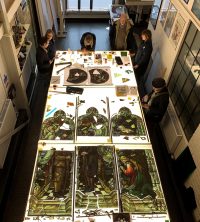 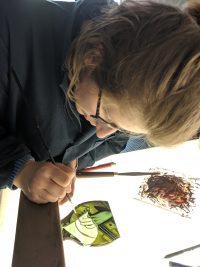 With the building under new ownership and funding secured to restore the window, the Barley Studio team set to work. Our philosophy for this conservation–restoration project was to return the window as far as possible to its original appearance, respecting the work of the original artist, while retaining as much of the original material (both glass and lead) as possible. Fractured pieces were edge bonded, where necessary, using CAF3 conservation grade silicone adhesive. Areas of badly broken and holed glass were replaced, where necessary, matching the colours from our extensive banks of glass and grisaille paints. We carried out many tests to match the painted detail and textures as closely as possible. Discreet mending leads were introduced in areas where part of an original piece could be kept but part had to be replaced. All new infills were discreetly signed, dated and documented (Figure 4).

During the project, the Barley Studio team were pleased to welcome representatives from Giroscope to the studio, to see the skills of our glasspainters and glaziers in action (Figures 5 – 7).

The window was successfully reinstalled in the original stonework, following minor repairs by stonemason Andrew Gomersall, in September 2019 (Figure 8). New black powder-coated stainless steel wire guards fixed to the exterior of each opening will protect the window from any future malicious damage.

It has been a privilege to work on this important project for new owners Giroscope, and its careful restoration showcases the skills of Barley Studio’s conservators, artists and craftspeople. We hope that the restored window signals the start of the regeneration of this iconic building, and its future as a central community resource once more.

This entry was posted in Issue 131, News. Bookmark the permalink.