Work has been completed on the spectacular Jesse Window at Wells Cathedral, marking the end of a monumental conservation project. The window, which dates from around 1340, is remarkably intact, having survived the English Civil War and the Second World War, standing as one of the best examples of 14th-century stained glass in Europe. The window is formed of seven main lights that depict the story of the birth, death and Resurrection of Jesus, alongside his ancestors, leading back to Jesse, father of King David. At the apex of the central light is the figure of Christ crucified on a green tau cross, and the tracery has scenes from the Last Judgment. Medieval craftsmen used silver stain and yellow, red and green glass to striking effect, and the window is known locally as the ‘golden window’ because of the extensive use of yellow glass of a rich golden hue.

Conservation of the Jesse Tree Window high above the main altar at Wells Cathedral, a medieval masterpiece, has been completed by the team at Holy Well Glass. This undertaking has been remarkable, in that it has been accomplished without recourse to central funding, or financial support from funding bodies such as the Heritage Lottery Fund. The restoration was a truly local effort, and its completion on time and on budget does great credit to the collective effort of the conservation team and the people of Wells, affirming their great respect and sense of responsibility towards the cathedral and this remarkable window. 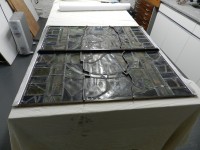 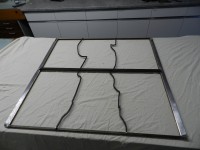 The project has been a model of collaboration, and the support of many colleagues and specialists from other conservation disciplines has contributed to the successful outcome. Particular mention must be made of the advice offered by external adviser Ivo Rauch, who at the outset challenged the conservation team to adopt a policy of minimum necessary intervention. The professional rigour involved in adhering to a conservation policy based purely on conservation, eschewing the temptation towards restoration, did indeed prove to be challenging initially. However, the establishment of conservation principles for the project in a definitive Detailed Method Statement –following thorough debate and an exhaustive preliminary investigative stage that including test cleaning, and protective-glazing trials with environmental monitoring – enabled the smooth progress of the project. 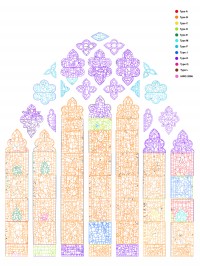 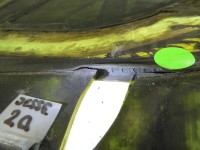 Fig. 3. Mill marks in the heart of the lead (c) Holy Well Glass.

The window has not been dismantled or re-leaded, and only a very small amount of local releading was considered necessary. The decision to retain the 19th- and 20th-century lead meant that new bronze perimeter frames for each stained-glass panel were required to ensure the long-term integrity of the conserved lead matrix. These frames incorporate beautifully crafted additional support bars, which follow the designs and are therefore invisible after reinstallation (Figs 1 and 2). The lead matrix was investigated as an integral element of the history of the artifact, by exposing mill marks in the heart of the lead (Fig. 3), which were recorded photographically and with scale drawings. These records were then cross-referenced with the known time-line of the window’s restoration history documented in the cathedral archive, and the results were mapped diagrammatically, allowing a definitive summary of the restoration cycles of the window to be formed (Fig. 4).

The glass itself was cleaned in a restrained manner. Cleaning trials enabled the best course of treatment for each glass type to be ascertained, and the glass was cleaned with de-ionized water on swabs, or dry cleaned with natural bristle and/or sable brushes as appropriate. Despite this conservative treatment, the colour key has been lifted beyond expectations, revealing the beautiful and unusual ‘golden’ palette of the glass. The window has small areas of intense blue of blue or ruby glass interspersed amongst passages of green and gold (both pot-metal yellow and silver stain), and the effect was likened by Dean Armitage Robinson to a flower meadow, which is a pleasing and accurate description (Figs 5, 6, 7). In particular, the cleaning of the window has increased the legibility of the unifying vine; the Tree itself, which now leads the eye through the design as originally intended. 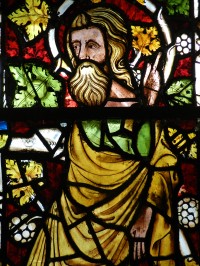 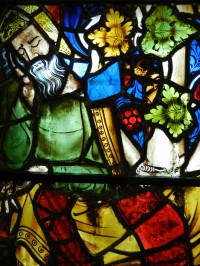 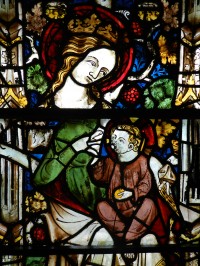 In one singular case, the principle of pure conservation was less appropriate, and further treatment was required. This great window has as its focal point a crucifixion – unusual in Jesse tree windows, which conventionally support a Marian cult. Here, a majestic figure of the crucified Christ survives; surely amongst the greatest expressions of medieval art in Europe. At some point in the history of the window, the face of Christ had sustained damage and a small piece of plain sheet glass been inserted, subsequently daubed with household paint (almost certainly taking advantage of scaffolding erected for works to the high vault in the 1970s). This one area alone was identified as justifying restoration works, as the spiritual message of the artwork was deemed to take precedence in this case (Figs 8, 9, 10). 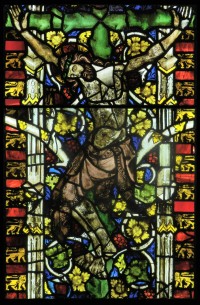 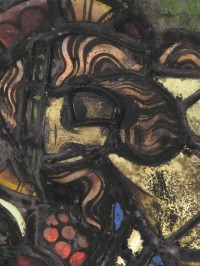 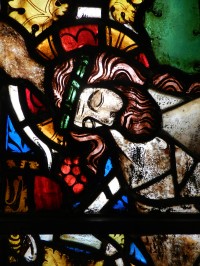 Arguably the major achievement of the conservation campaign has been the design and manufacture of the internally vented protective-glazing system, developed specifically for the site, which has set new benchmarks in terms of quality of craftsmanship and design. The aim was to produce a system that paid due respect to the architectural setting in terms of its materials and production. To this end, bronze sections were custom-milled to fit the stone profiles accurately. All joints were silver soldered. The external glazing was also designed to open, with hinged sections corresponding to original panel divisions, allowing easy cleaning, maintenance and removal as part of disaster management. All fixtures and fittings were machined from the same architectural bronze material (Figs 11, 12, 13, 14). 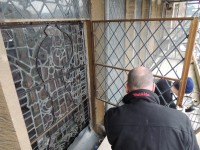 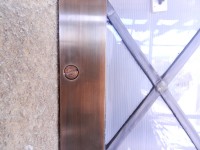 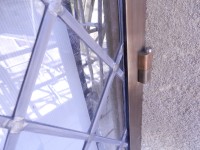 The conservation team invested in research and development in the manufacture of bronze sections, and consulted with metalwork specialists, but the works were all carried out in house to ensure tight quality control. Where the complex tracery sections were concerned, innovative production methods were embraced. Accurate templates of the stone profiles were taken, and vectored to produce digital files, which were used to allow the bronze material to be cut to shape by a sophisticated water-jet cutting machine. The resulting frames fit the stone reveals with unerring accuracy. 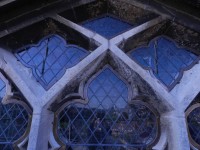 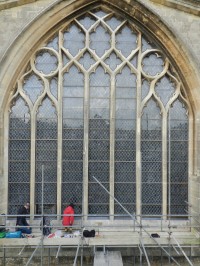 The decision to use diamond quarry glazing (Fig. 15) for the external screen was inspired by the late Peter Bird, architect for the cathedral at the beginning of the project, who advocated this approach with the aim of unifying the façade, which has quarry glazing at high level, and the adjacent Chapter House. His judgment in this respect, based on an intimate understanding of the building as part of the local landscape, is vindicated in the final appearance of the exterior of the eastern arm of the cathedral.

The conservation team at Holy Well Glass would like express their thanks to friends and colleagues for their generosity in assisting them towards a successful outcome.

This entry was posted in Issue 85, News. Bookmark the permalink.