Glaziers and the Reformation in England: New Discoveries 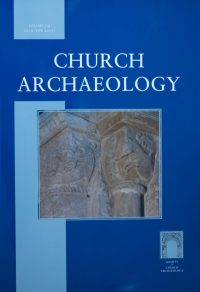 An article by Hugh Willmott, Senior Lecturer in European Archaeology at the University of Sheffield, in the latest issue of Church Archaeology (See Further Reading) examines the physical evidence for the removal of medieval stained glass from Britain’s monasteries after their dissolution in the 1530s/40. [Fig 1]

Recent studies have shown that this was often a well-organised and structured process. Once dismantled, the glass was certainly occasionally preserved and installed elsewhere, as at the Church of St Matthew at Morley in Derbyshire (where panels depicting The Legend of the True Cross and episodes from The Life of Robert of Knaresborough in windows nII, nIII, nIV, nV and nVI, seems to have come from the nearby Premonstratensian abbey of Dale), in most cases it seems that the glass was sold for probable re-melting and reuse. [Fig.2]

The current article begins with a brisk canter through some of the documentary and archaeological evidence of the period illustrating the considerable care that was taken to preserve the glass for probable reuse. This includes the rather terse mention of ‘xxviij panes of glass’ listed for sale after the dissolution of the Benedictine nunnery of Brewood, Staffordshire, in 1538. The often-quoted case of the stripping of materials from the Cistercian abbey of Rievaulx Abbey, Yorkshire, is also cited, where clear instructions were left that the west windows of the church were to be taken down carefully and carried away to Hemsley Castle. [Fig 3]

Further examples in the article include the discovery of a late 13th-century grisaille window found 2 metres to the north of the church during excavations at Bradwell Abbey, Milton Keynes, Buckingham-shire. That it was recovered in its still-leaded state suggests that it was at least removed carefully even if seemingly carelessly left behind when the strippers departed. [Figs 4, 5] 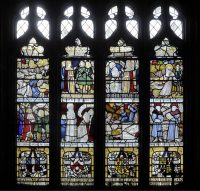 But, as Dr Willmott stresses, by far the most persuasive evidence for window glass being dismantled and carried away for use elsewhere is the relative absence of any large-scale or exciting finds during the excavation of monastic sites.

Thereafter he investigates by whom and how the glass was dismantled, concluding that it required the involvement of skilled glaziers and on-site furnaces. Details from Rievaulx are quoted again where a 1539 inventory of its assets said that the glass should be, ‘sortyd into iii parties. One the fyrest to be sortyd. The second sort to be sold. The iii sort to be taken out of the lede and the lede molten’. He says that only experienced glaziers would have had the skills to dismantle the windows, assesses these categories, and undertake the sorting process. 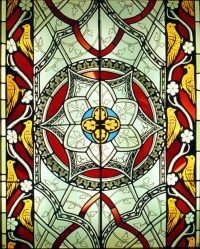 The stripping of lead was often one of the first activities undertaken once monastic buildings had been sold to their new owners. Roofs and pipework could yield enormous quantities, as the 399½ fothers or tonnes of lead removed from the Cistercian Abbey at Jervaulx (North Yorkshire) testify. Although the amounts recoverable from melting lead window cames would be tiny in comparison, the discovery of small lead-melting hearths during monastic excavations suggest that it was certainly not an overlooked asset. Claims that such hearths were used for cupellation, the extraction of naturally occurring silver from lead, are dismissed by Dr Willmott who argues that by the 12th century most lead in circulation in Britain was actually derived as a by-product from silver extraction. He also says that it is inconceivable that the lead used in ecclesiastical windows would have contained any appreciable quantities of silver. This is confirmed by the trace analysis of surviving windows leads, such as at the Benedictine Abbey at Battle ( East Sussex), where the window leads were found to contain silver levels of less than 0.1%.

Finally, Dr Wilmott cites the discovery of debris from a glazier’s workshop at Bishop’s Lane, Hull, Yorkshire, during excavations in 2003. Consisting of 7,440 fragments deposited at some point during the second half of the sixteenth-century they include 174 decorated pieces. Fragments of foliage painted grisaille, elements of figural drapery and body parts, zoomorphic quarries, architectural borders, black letter text, and a finely detailed fragment of a Flemish-style roundel with a woman’s face, seem to have come from a number of different schemes spanning a 200 year period. Given the range of the mix the assemblage can be interpreted as evidence of the removal and recycling of medieval glass from Hull’s churches, even perhaps neighbouring monastic sites.

The article contains a full Bibliography of sources as well as archaeological evidence of glaziers working at pre-Reformation monastic sites. Further Reading: Hugh Willmott, ‘Glaziers and the removal, recycling and replacement of windows during the Reformation in England’, Church Archaeology, Vol. 19, 2019 for 2015, pp. 45 -52.