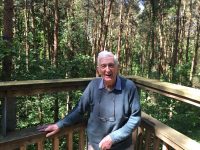 It is with much sadness that we report the passing of our friend George Wigley on April 1st, aged 91.

George led a fascinating life. Born in Milan in 1928 to a British family who had lived there for a number of generations, the arrival of Mussolini and the Second World war suddenly made them into enemy citizens. They were given an ultimatum: an internment camp for the duration of hostilities, or leave. With one suitcase per child they took the train across Europe to Britain and started again. There George attended Burton Grammar School, Burton-on-Trent, and then Manchester University, where after “working far too hard” he graduated with a first class degree in French and Italian.

Deciding not to pursue a career in academia he joined the Airforce and flew Meteors – the first jet fighters in the RAF, as well as Canberra bombers. After leaving the RAF, George spent twenty-five years flying commercial jets, clocking up thousands of hours in the air.

George’s love of stained glass was brought about by a mixture of accident and good fortune. Attending an auction to buy furniture for the family home he shared with his wife Eileen and son Charles, George almost tripped over a panel of glass standing on the floor. With no other significant bidders, the panel, made for the sixteenth-century cloister cycle in Mariawald Abbey, Germany, became the first of a collection to enhance the house (Fig. 2).

This early success kindled a passion that grew from curious amateur to confident collector. Then George decided to take the plunge: with his love of flying beginning to wane, he took early retirement to become a full-time dealer in stained glass, establishing Monastery Stained Glass. He devoted the next thirty-seven years to his business and made friends across the world. Buying, selling and repairing antique panels and commissioned pieces, George gained an enviable reputation and has supplied many major museums and private collections in Europe, America and beyond.

His enthusiasm for chasing glass never dimmed and he was still actively bidding at auction throughout December 2019. Always keen to share his knowledge and enthusiasm, George loved discussing the intricacies of glass, whether patiently explaining aspects of a piece to a novice or debating with fellow experts in the field. He will be missed and fondly remembered by all who knew him.

Due to the current coronavirus restrictions it is not currently possible to have a funeral and celebration of George’s life. Once these restrictions have been lifted one will be arranged, hopefully in the summer.

This entry was posted in Issue 131, News. Bookmark the permalink.