Almost fifty years after the rebuilt Coventry Cathedral was consecrated by the Queen, the death has been announced of one of the stained-glass artists whose contribution to its rebirth remains one of the highlights of any visit.

Keith New (Hon FRCA, BSMGP) was born in London and studied graphic design at the Royal College of Art (RCA) before was conscripted to serve in the RAF towards the end of the Second World War. On his return to the RCA in 1948, he joined the stained-glass department led by the late Lawrence Lee (1909–2011), and in the 1950s was asked by Lee to design three windows for the nave of the new cathedral, a modernist building designed by Sir Basil Spence (1907–76).

After that, New’s commissions included windows for the Royal College of Physicians in London; Bristol Cathedral; All Saints Church, Isleworth; the Convent of the Sacred Heart, Tunbridge Wells; and Christ Church, Calgary (Canada). In 1958, he was commissioned to provide windows for Sir Christopher Wren’s church of St Stephen Walbrook, which had been badly damaged during the blitz. Unfortunately, these were subsequently removed and replaced with clear glazing during a later reordering of the church funded by the property developer Peter Palumbo (b.1935, created Lord Palumbo, 1991). After being stored in the London Stained Glass Repository (LSGR, see Vidimus 50), one of the windows, depicting the Conversion of St Paul, was acquired by the Dean and Chapter of Norwich Cathedral and inserted in the centre light of the top tier of openings in the north elevation of the north transept. 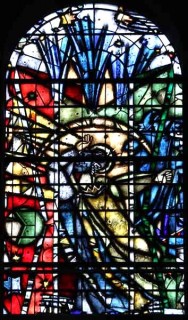 In 1999, Norwich Cathedral commissioned John Hayward (1929–2007) to make additional windows in this area of the church and asked him to take account of Keith New’s panel in designing his own. Hayward solved what night have been a potentially difficult stylistic problem by acquiring two more of New’s panels from St Stephen Walbrook, courtesy of the LSGR, to flank the first panel, and then designing three further panels that complemented New’s work in terms of colour and approach.

In later years, Keith switched to painting large landscapes of the British countryside using a mix of acrylic paint and oil pastel. He is survived by his wife, Yvonne, whom he married in 1953, and two daughters, Clarissa and Roxanne, to whom we send our condolences.

This entry was posted in Issue 59, News. Bookmark the permalink.