Vidimus can report the tantalising glimpse, in a recent Sotheby’s catalogue, of a rare and important thirteenth-century window from Tours Cathedral. It appeared suddenly after a century of being thought lost, but was then withdrawn, at the owner’s request, from Sotheby’s 10 July sale in London of Old Master Sculpture & Works of Art. 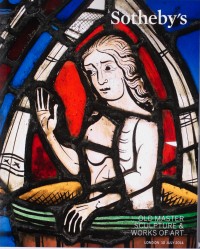 Fig. 1. Cover of the auction catalogue.

The window formed the cover illustration of the auction catalogue [Fig. 1]. The auctioneers estimated the value of the window at between £60,000 and 80,000. It depicts Adam bathing Eve after the birth of Cain.

Before its appearance at Sotheby’s, the exact whereabouts of this beautiful and iconographically unusual window had been unknown since 1900, although it was widely suspected that it may have entered the USA sometime in the first half of the twentieth century.

According to the US scholar Linda Morey Papanicolaou, it was probably made for the Church of Saint-Julian near Tours around 1260, before being acquired by the cathedral chapter in 1810 as part of a campaign to replace glass in the ambulatory chapels that had been damaged or destroyed during the Revolution.

Together with other panels from the same Genesis series, the two demi-lunes that make up this window were subsequently removed between 1845 and 1863 by the father and son firm of Leopold Lobin, who had been employed to rearrange the cathedral glass. Thereafter most of the panels appear to have entered the collection of Lucien Léopold Lobin (d.1892) before his heirs sold them after his death.

Although some panels were returned to the cathedral in 1912, nothing was known about five others until 1935, when four were offered to The Metropolitan Museum of Art in New York by the Paris-based dealers Arnold Seligman, Rey and Co. Despite the interest they aroused they were rejected by the museum as fakes, prompting some people to speculate that they may have been copied from the still-extant original panels. In 1981, the rejected panels were discovered at Pomfret School in Pomfret (Connecticut) by Linda Morey Papanicolaou, who presciently concluded that the ‘original panels … may yet be found’.

This entry was posted in Issue 83, News. Bookmark the permalink.