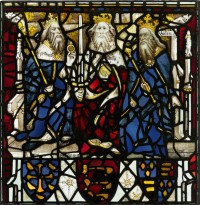 This summer the immense task of returning John Thornton’s stained-glass Apocalypse cycle (together with the donor and other figures in row 1) to the Great East Window of York Minster will begin. Ninety panels of stained glass, meticulously conserved by the York Glaziers Trust as part of the HLF-funded project York Minster Revealed will once again illuminate the choir. Before they return to their rightful places, five panels from the base of the window, depicting the donor, Bishop Walter Skirlaw of Durham (d.1406) and some of the historical figures – kings, archbishops and popes – who flank him, will be on display at ground level in the Orb, allowing visitors to see at close quarters some of the finest glass-painting in the whole window. Drawing on chronicle sources that had only recently been composed when the window was executed, as well as on much older histories, especially Bede’s famous Ecclesiastical History of the English People, the designers of the Great East Window offered a carefully edited version of English history from pre-Roman times that stressed York Minster’s place in the history of universal salvation and its importance in the evangelization of the north. 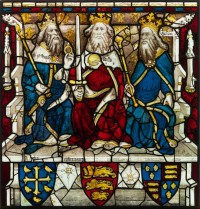 Legendary figures such as the British King Lucius, founder of the first church in York, mingle with real figures from English medieval history, including King Edward the Confessor (illustrated) and Edward III, who married in the minster in 1328. To the right of Skirlaw sit some of the key ecclesiastical figures from this illustrious history, including St William of York (d.1154), enshrined nearby.

The panels can be viewed until the end of May. See the York Glaziers Trust website for more information on the Great East Window and the row 1 panels.

This entry was posted in Issue 90, News. Bookmark the permalink.