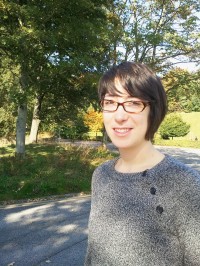 Vidimus is delighted to report that Jasmine Allen has been appointed Curator of the Stained Glass Museum in Ely, and will take up her post in March 2013.

Jasmine completed her undergraduate studies in the History of Art Department at the University of York, where stained glass became her passion and specialism at an early stage. After completing a Master’s degree at York, funded by the Arts and Humanities Research Council (AHRC), she worked for the Stained Glass Museum between 2008 and 2009, conducting research into the museum’s collection and assisting former Curator Susan Mathews. She then spent some time cataloguing the collection of stained glass at the Yorkshire Museum, before returning to the University of York in October 2009 to begin her AHRC-funded doctoral studies and take on undergraduate teaching duties.

Jasmine’s doctoral thesis, entitled “Stained Glassworlds”: Stained Glass at the International Exhibitions, 1851–1900, examines the classification, display, iconography and international circulation of stained glass at selected international exhibitions held in Britain, France, the United States of America and the British colonies in Australia in the second half of the nineteenth century. This project, and her interest in the medium, has taken Jasmine to the USA, Australia, and across Continental Europe to study glass, visit archives, and meet other specialists. Vidimus readers will remember that Jasmine authored a series of Panel of the Month articles between 2009 and 2010, and since then she has presented numerous conference papers, and published an article entitled ‘Stained Glass and the Culture of the Spectacle, 1780–1862’ in Visual Culture in Britain, xiii/1 (2012). In 2010–2011, she was also involved in ‘Sensory Stories’, an AHRC-funded public-engagement project that trained doctoral researchers to communicate their research to a wider audience using touch, taste, smell, sound, object-interaction, and performance.

Jasmine told Vidimus: ‘I am very much looking forward to taking up my new post at the Stained Glass Museum in March 2013. I hope to build on the museum’s success in public outreach and interpretation of its collection through a variety of exhibitions and events, alongside the current Friends’ and education programmes. My long-term goals are to ensure full recognition of the museum’s status as both a national and international centre of excellence for display, interpretation, education and scholarship in the field of stained glass.’

This entry was posted in Issue 63, News. Bookmark the permalink.