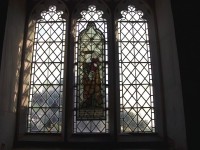 Although one of the smallest counties in England, and not rich in medieval stained glass, Hertfordshire does hold some significant and interesting examples in its parish churches. Although many Hertfordshire monuments are still to be recorded for the British CVMA, a taste of those investigated so far is now available in the Picture Archive of the CVMA (GB) website.

Having initially worked in Hertfordshire as a researcher for the Corpus of Romanesque Sculpture in Britain and Ireland, a sister project to the British CVMA, I volunteered some time ago to photograph stained glass in the county. I began, armed with the Hertfordshire volume of Pevsner’s Buildings of England, the Hertford Victoria County History (VCH), and invaluable notes on Hertfordshire stained glass kindly loaned by Richard Marks. Most of my initial trips were by motorcycle, which always added a sense of adventure, although requiring careful attention to the weather. Photography in damp leathers in chilly churches is something to be avoided, as I’d learned through many site visits for the CRSBI. 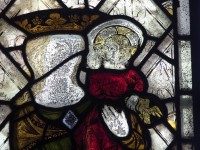 So far, 69 sites where medieval stained glass had previously been recorded have been identified. Some of this glass may not have survived, so any descriptive or pictorial evidence of now-lost glass will be compiled for the British CVMA in due course. At present, 278 images from 18 sites have been uploaded to the CVMA website (inv. nos. 027433–027710). The sites are 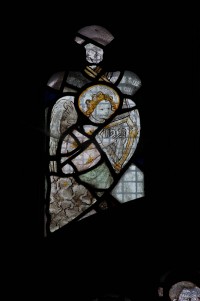 Highlights so far include an early 14th-century panel depicting the Virgin and Child, at St Paul’s Walden (027705). There is some loss of detail, particularly to the face of the Virgin, and some unsympathetic repairs, but a sense of intimacy is conveyed by the composition of the figures and their delicately drawn features. The clear strong colours are striking, and details such as the dove of the Holy Spirit, wing in hand with the Child are a further delight (027710).

Another important example, and in a better state of preservation, is the remains of a mid-14th-century Tree of Jesse at St Mary Magdalene in Barkway. The panel stands between two others comprising fragments of later (15th- and 16th-century) compositions, and has the limited palette and dominant yellow stain typical of the mid-14th century (027450; 027476). The outer panels form a colourful jumble and above, in the tracery, are 15th-century musical angels (027451; 027452).

One of the most light-hearted examples of draughtsmanship in Hertfordshire stained glass must be in the quarries of the east window of St Mary, Clothall. The depictions of birds, some species readily identifiable, are painted in a loose freehand manner and are lively and naturalistic. They are among just a few examples in the country (027561; 027569). Other quarries, possibly by the same hand, are found at St Mary, Clipsham in nearby Rutland.

Recording work is ongoing and will no doubt reveal further treasures.

This entry was posted in Issue 90, News. Bookmark the permalink.