Stained-Glass Records at the Corning Museum

The Corning Museum of Glass, Corning NY, is also examining its collection of paper documents relating to stained glass. The museum holds a vast collection of documents from 19th-century glass companies in London, and is beginning a programme of unfurling and assessing a stack of around 7,000 drawings and paintings from the Whitefriars glass factory, which has been stored in the library at the museum for several years. Whitefriars glass factory was purchased in 1834 by James Powell and became known as the namesake firm James Powell & Sons, although the glass works itself had been in business for at least a century previously. The growth in church building in the 19th century and the resulting demand for stained glass enabled the firm to set up a stained-glass department in 1844, adding to their repertoire of decorative, table and scientific glass. The company was associated with artists such as Edward Burne-Jones, Henry Holiday, William Blake Richmond and William Morris, and worked extensively with Charles Winston to produce glass with the movement and texture close to medieval glass, appropriate for the Gothic revival. The company was an enduring, innovative and successful glasshouse, closing only recently, in 1980. Glass by James Powell & Sons can be seen in countless churches across the country [Fig. 1]. 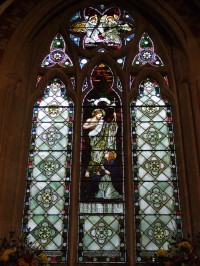 The Corning Museum of Glass will be working with West Lake Conservators to go through pages and sheets that depict scrollwork borders and biblical figures and which are brittle and fragile. The drawings are currently stored rolled in plastic enclosures, either individually or part of a group, and identified by church name and the location if this is known. Most of the drawings are full scale, and the medium varies, from pencil and charcoal to watercolour.

Plans are being developed for an online database which will digitally reunite drawings and correspondence with photographs of surviving windows. Interestingly, this could show whether the finished windows differed from the original cartoons or designs, and whether any notes or suggestions written in the margins were followed!

This entry was posted in Issue 85, News. Bookmark the permalink.