Update on the Herkenrode Windows at Lichfield Cathedral

Fig. 3. Before and after conservation.

The conservation of the important sixteenth-century glass created for the abbey of Herkenrode (near Hasselt, Liège, in present-day Belgium) in the 1530s and installed in the Lady Chapel of Lichfield Cathedral since 1806 is approaching the half-way stage. Conservators at Barley Studio, near York, led by Keith Barley FMGP ACR, have completed the windows on the south side on the chapel and have now begun work on the east window.

Fig. 4. Before and after conservation

The chapel has seven large windows of early Flemish glass. Five of the seven contain scenes from the life of Jesus, from the Annunciation, through the Passion and the Resurrection, to the Day of Judgement; the final two windows contain a collection of donor panels. The windows date from the very end of the medieval period and show remarkable Renaissance-style painting effects, including a heightened use of perspective and shadowing. A detailed study of the windows is currently being prepared by the stained glass historians Yvette Vanden Bemdem and Isabelle Lecocq, supported jointly by the English and Belgian CVMA, as the current conservation work offers a once-in-a-lifetime opportunity to study the glass at close quarters. 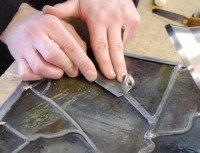 Fig. 5. Removing the surface leaf of the lead.

Keith Barley and Alison Gilchrist of the Barley Studio take up the story: ‘The current conservation work combines relatively modest intervention to the leadwork (the 1890s leadwork of Burlison and Grylls is reasonably sympathetic to the glass and is still in good condition) with some conservation innovations. There are many ‘strap’ leads, which were probably added when the windows were removed for safety during the Second World War; these are being removed – a straightforward process – and the glass pieces are being edge-bonded using conservation-grade silicone or epoxy adhesives where necessary. In some cases it is also possible to remove mending leads added during the 1890s restoration and to edge-bond the pieces together in a similar manner. In many cases however the edges of the glass have been grozed – that is, a small amount of glass has been removed in order to create space for the mending lead. Although the edges cannot be glued back together in these instances, the visual intrusion of the mending lead can still be reduced, by removing the surface leaf of the lead so that only the thin line of the heart remains between the glass pieces. This type of intervention is also possible in areas towards the centre of the panels where pieces cannot be easily removed for edge bonding. 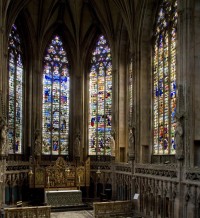 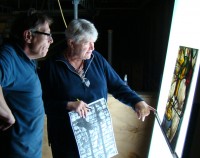 In many scenes, the painted detail has suffered, due to corrosion of the glass and paint on the internal surface. It is this detail that makes the scenes readable and gives expression to faces and hands in particular, and so loss of this detail can greatly detract from the artistic value of the glass. As the outside (mostly unpainted) face of the glass is in very good condition, we are strengthening lost painted detail in key areas of the imagery by painting on the reverse of the glass using a cold (unfired) paint mixed from traditional glass pigment and gold size. This paint is reasonably robust to water and scratching once dry, but will remain easily removable in the future with an organic solvent such as ethanol. 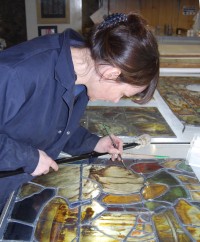 Fig. 8. Painting on the reverse of the glass.

It is only possible to undertake these conservation interventions because when the windows are reinstalled, they will no longer have to act as the weather shield for the building. Indeed, if you visit Lichfield Cathedral today, you will find the window openings of the Lady Chapel occupied by new plain glazing. When the Herkenrode glass returns in 2015, it will be mounted to the inside of this plain glazing, providing an internally ventilated, external protective glazing system to prevent moisture from reaching the original glass, whether atmospheric moisture from the outside or condensation on the inside. Keeping the glass dry in this way will help to preserve both the conservation work and this wonderful glass for many generations to enjoy in the future.’

This entry was posted in Issue 63, News. Bookmark the permalink.