The Miraculous Cure of ‘Mad Henry of Fordwich’ at the Shrine of St Thomas Becket: Trinity Chapel, Canterbury Cathedral

Each month, Vidimus will showcase a different panel from the wealth of Britain’s medieval stained glass. The panels will be chosen with the aim of providing, collectively, a sense of the great range of glass that survives, in terms of date, subject matter and the kinds of settings for which it was made. The selected pieces will also relate, in various ways, to some of the broader issues being raised in the study and conservation of medieval glass, such as fashions in window forms and techniques, or approaches to the restoration of medieval glass. 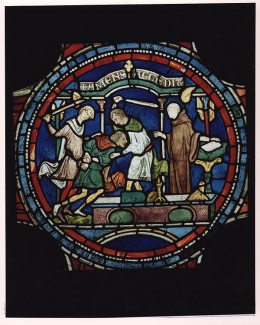 The Miraculous Cure of ‘Mad Henry of Fordwich’

This issue’s panel, showing a part of The Miraculous Cure of ‘Mad Henry of Fordwich’ at the shrine of St Thomas Becket, is taken from the north side of the Trinity Chapel (nIV in the CVMA’s numbering system).

It has been chosen for presentation here for a variety of reasons. In the Middle Ages, Canterbury Cathedral was rivalled in importance in Britain only by York Minster, as the churches of the northern and southern archiepiscopates. The panel forms part of the earliest surviving major ensemble of glass in England, and its subject matter serves as a ‘historical document’, attesting to the pilgrim activity for which the cathedral was a focus for centuries prior to the Reformation. Stylistically, this panel, along with those by the same glaziers, most forcibly suggests connections between glass painting at Canterbury and contemporary work in northern France. Indeed recently, the early stained glass panels at Canterbury have collectively been labelled ‘one of the greatest achievements of medieval European art’ (Michael 2004: see ‘Further Reading’ below).

The Cathedral and Community A Christian community was first established at Canterbury in the final years of the sixth century by Augustine, dispatched from Rome by Pope Gregory the Great to bring the faith to Britain. Although not immune to the political turbulence of the Anglo-Saxon period on account of its wealth and status, the (by now, Benedictine) community at Canterbury flourished, and by the time of the 1066 Conquest the cathedral was a very substantial edifice. At the end of the following year, however, the church and most of the monastic buildings were devastated by fire. This marked the beginning of an extended period of construction, culminating in the lavish Romanesque choir of Prior Conrad, dedicated in 1130. After the trauma of Conquest and conflagration, the community was at last able to settle into a routine of normal monastic concerns, such as the performance of liturgy and estate management. On the evening of 29 December 1170, however, this period of peace was brought to an end with the assassination of Canterbury’s archbishop, Thomas Becket, within his cathedral, by knights loyal to King Henry II. Almost immediately, Becket was formally canonized, and a vigorous, international interest in him sprang up, transforming Canterbury into a key pilgrimage site. It was almost fortunate, then, that just four years after Becket’s death, fire again swept through the cathedral, destroying Conrad’s ‘glorious choir’. For the monastic community at Canterbury, it was an opportunity to create an appropriately spectacular backdrop for the cult of St Thomas. With the employment as architect of William of Sens, an Englishman trained in France, it also meant the introduction to England of the most fashionable Gothic architectural forms.

The Panel: Production and Condition Contemporary descriptions of the building campaign by the Canterbury monk, Gervase, indicate that the Trinity Chapel, at the heart of the choir, which houses this panel, was completed c.1179–84. The date at which the chapel received its glass is less clear. Almost certainly, the windows were glazed between 1184 and summer 1220, when the relics of St Thomas were translated to his shrine, which formed the focal point of the chapel. Political tensions between King John and the cathedral in the early years of the thirteenth century led to the exile of the archbishop and his community between 1207 and 1213, and, on stylistic grounds, it is more likely that window nIV, of which this panel forms a part, was painted after the community’s return to Canterbury.

A number of glaziers or workshops operated alongside one another to complete the Trinity Chapel windows. Each individual or group was typically responsible for more than one window in the chapel, as well as contributing to the painting of the glass in other parts of the church; sometimes there was collaboration between glaziers and/or workshops in the execution of individual windows. The glazier responsible for the present panel, for example, is thought to have provided window nIV, much of nIII, and the figures of Amminadab and Nahshon (two ancestors of Christ mentioned in the Book of Numbers) for the clerestory window NX, over the steps to the Trinity Chapel. The similarities between these clerestory figures, in particular, and others in the choir clerestory of the Abbey of St Remi (Reims, France) suggest that the glass painter responsible for nIV was either a French artist, or one who was deeply influenced by projects in north-east France.

The Trinity Chapel glass originally recounted episodes from the life (now largely lost) and miracles of St Thomas Becket. In creating the scenes, the glaziers depended for their subject matter primarily upon two textual sources, written by the monks of Canterbury, recording the events and miracles associated with the cult of St Thomas from its earliest days to 1180. Some seventeen of the miracle scenes, however, do not originate in these sources; instead, the glass itself, it has been noted, ‘appear[s] to be a genuinely unique visual record’ of shrine-focused events that took place between 1180 and the creation of the glass. The episode of the Cure of Henry of Fordwich can be identified as such from the record of the incident in the monastic textual sources. The panel survives in very good condition. Although the habit of the monk on the far right, and the heads of the two men in the centre of the scene are modern replacements, the rest of the glass is original, and the current composition – an important factor in the correct identification of the miracle scenes – is accurate.

Iconography The panel shows, centrally, ‘Mad Henry’, his hands bound behind his back and his red cloak hanging in disarray down his front, being dragged to the shrine of St Thomas. Henry is encouraged towards the shrine by the sticks or thrashing rods of two ‘friends’, one of whose cloak appears to have become caught on a candlestick on top of the shrine. This detail, along with the stance of the member of the monastic community, protectively shielding his book (supported on a lectern) from the approaching Henry, effectively convey a sense of drama and chaos to the panel. The shrine itself is depicted decorated with a conventionalized ‘marble’ design, and containing two ‘crawl holes’ along its side, into which, a number of medieval art works show, pilgrims would creep bodily or insert a limb, the feebleness of which may have prompted pilgrimage. A number of objects are depicted resting on the top of the shrine, presumably the gifts of those who had sought help from the saint and serving as evidence of the efficacy of worship of him. Clearly identifiable is a large, gold candlestick and coiled objects. The latter most probably represent the long candles, consisting of wicks measured to the length of the body or limb the saint was believed to have cured and dipped in wax, offered by the pilgrims in thanks. Alternatively, they may constitute a conscious reference to other miracles depicted in the window: in the pair of panels immediately above the cure of ‘Mad Henry’, Juliana Puintel is shown in the act of presenting a coil of precious wire at Becket’s tomb. Her coil is almost identical to that in the ‘Mad Henry’ scene, differing only in its tone, being depicted in the same piece of pinkish glass used for her hands. The identity of the large green shrine object in the ‘Mad Henry’ panel has been obscured by paint loss, but may be another example of the green casket or box that features in a number of panels in nIV. Working alongside the image, the action of the scene is also summarized in the inscription running along the top of the architectural screen, ‘AMENS ACCEDIT’ (‘He arrives out of his mind.’).

A pendant scene to this panel, depicting Henry’s madness, appears alongside it in nIV, representing the curative effects of a night spent before the shrine. Here, Henry is shown in calm prayer, his cloak now neatly falling down his back, whilst one of his ‘friends’ and the monk look at each other in clear disbelief at the transformation that has taken place. The rope with which he was formerly bound and the rods with which he was beaten are now shown before the shrine as an ex voto, or offering. Again, the meaning of the scene is identified by an inscription near the top of the panel, reading ‘ORAT, SANUSQ(UE) RECEDIT’ (‘He prays, and departs sane’). The high quality of the glass painting at Canterbury is obvious, but the inscriptions in these two panels serve as more subtle testimony to the sophistication of the work. Not only do they succinctly summarize the events in each scene, but, unusually for glass, they together form a perfectly punctuated, internally rhyming, hexameter.

Beyond Canterbury, surviving instances of the depiction of the life and miracles of St Thomas are few, limited, in glass, to fragmentary examples such as those on the south side of York Minster chapter house; two panels from Woodstock palace, now in the Bodleian Library (Oxford), representing King Louis VII welcoming the exiled Thomas Becket to France and the Penance of Henry I; and scenes of martyrdom, penance, return from exile and pilgrimage to Becket’s shrine in the parish churches at Checkley (Staffs.) and Nettlestead (Kent). Single figures of Becket as sainted archbishop, however, are slightly more numerous and can be seen, or are recorded as having been, at the library of Trinity College (Oxford); at Hereford Cathedral; and in the parish churches of Chalvington (Sussex), Cothelstone (Somerset), Credenhill (Herefords.), Dewsbury (Yorks.), Greystone (Cumberland), Horton-in-Ribblesdale (Yorks.), Ludlow (Salop), Mere (Wilts.), St Peter Mancroft (Norwich), Over Peover (Cheshire), St Thomas of Canterbury (Salisbury), Thaxted (Essex), and Yarnton (Oxon.). The chantry chapel of Richard Beauchamp, Earl of Warwick (d.1439) contains the most splendid surviving representation of Becket, whilst more unusual are the fragments at Fairford (Glos.), showing a reliquaire-chef of St Thomas, with the end of the assassin’s sword piercing his head, and at St Mary Redcliffe (Bristol), where a similar image occupies a small roundel. In the context of Reformation England, that these examples have survived is remarkable, and testimony to St Thomas’s popularity in the medieval period. The predominantly late date of these panels also suggests the longevity of Becket’s cult. Under King Henry VIII, a direct attack was mounted by the Crown against St Thomas. Towards the end of 1538, a royal proclamation ordered the removal of Becket from the church calendar and all images of him from church – a result, no doubt, of the uncomfortable parallels between Becket’s quarrel with Henry I, and Henry VIII’s relations with the Pope in Rome. A reflection of the situation in medieval England can perhaps be glimpsed in the windows of the great cathedrals of France, where his life and miracles are brilliantly played out in the glass of Sens, Chartres and Angers.

Our Picture Archive includes an extensive collection of images of the miracles of St Thomas Becket in the Trinity Chapel at Canterbury Cathedral, Kent. Beyond Canterbury, images relating to St Thomas can be found at Credenhill (Herefs.); Nettlestead (Kent) (with a photograph and a watercolour of the panel); Warwick, St Mary’s, chantry chapel of Richard Beauchamp (east window); Yarnton (Oxon.) (nIV); and York Minster, chapter house (sIV 8a).