The Joiner at the Nailing of the Cross: East Window, King’s College Chapel, Cambridge

Each month, Vidimus will showcase a different panel from the wealth of Britain’s medieval stained glass. The panels will be chosen with the aim of providing, collectively, a sense of the great range of glass that survives, in terms of date, subject matter and the kinds of settings for which it was made. The selected pieces will also relate, in various ways, to some of the broader issues being raised in the study and conservation of medieval glass, such as fashions in window forms and techniques, or approaches to the restoration of medieval glass. 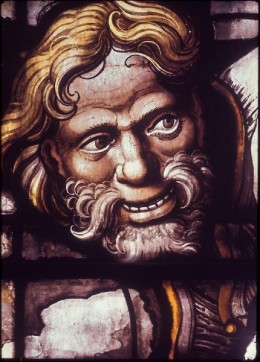 The joiner at the Nailing to the Cross, east window, King's College Chapel, Cambridge.

This issue’s panel is a detail from the east window of King’s College Chapel, Cambridge, showing the face of an individual carrying a basket of joiner’s equipment, in a scene of Christ being nailed to the cross. It has been chosen for presentation in this month’s issue of Vidimus primarily because it is representative of the outstanding artistic accomplishments of some glass-painters working in England at the very end of the Middle Ages, and also of the late medieval love of ‘fleshing out’ biblical accounts of events in Christ’s life to include a range of characters not mentioned in scripture. Furthermore, an unusually large amount of documentation relating to the King’s College scheme survives, providing a rare insight into the workings of the glass commissioning and production process of a particular monument.

The College and Chapel King’s College, or, more properly, The College Royal of Our Lady and Saint Nicholas of Cambridge, was formally established by letters patent of Henry VI in February 1441, as a sister foundation to his recently established college of Our Lady of Eton beside Windsor. Although initially modest in scope, by 1445 the king’s plans for his Cambridge foundation envisaged a spectacular display of royal patronage to rival, explicitly, recent collegiate establishments in Oxford. The chapel’s foundation stone was laid by Henry himself in the summer of 1446, and building work progressed steadily during his life time. Despite generous donations by subsequent monarchs, the distractions of civil war meant that it was not until the reign of the first Tudor king, Henry VII, that the bulk of work was done, and only in the summer of 1515 was the chapel’s stonework finally completed, with the installation of its spectacular fan vault, under the patronage of Henry VIII.

The Production of the Panel The windows of the main chapel and its side chapels had been temporarily glazed with white glass during the building’s construction, but within just a few months of the completion of the great vault at the latest, workmen had been recruited to replace this glass with a magnificent painted scheme. A memorandum survives dated the last day of November 1515 instructing that £100 be paid ‘unto Barnard Flower the Kinges Glasier … towardes the glasing of the great Churche’. Flower had been the King’s Glazier most probably since the late 1490s, and by the time of the King’s chapel project is known to have worked on prestigious commissions such as the glazing of Woodstock Palace in Oxfordshire (1496), Shene Palace (1497), the Tower of London (1500–1502), and the great pilgrimage chapel of Our Lady at Walsingham in Norfolk (1511–12). However, in July or August 1517, Flower died, having completed, it seems, only four of the twenty-six chapel windows, and work on the glazing came to a halt.

Nine years later, in 1526, Gaylon Hone was employed as Flower’s successor and the head of a team of glaziers at King’s College, to complete the glass painting, including the east window. The contracts made between the college on the one hand, and Hone and his fellow glaziers on the other, stipulated that all work should be completed within five years. Yet despite the penalties the glass painters would almost certainly have incurred, their deadlines went at least partially unmet. In 1534, for example, part of a fine imposed by the king on Bishop Nix of Norwich was put towards the chapel’s ongoing glazing, whilst Hilary Wayment has suggested that no fewer than ten windows (quite apart from the great west window, which contained only white glass until 1879), can be dated to 1535–47 on stylistic evidence. It is to this period, and more specifically to c.1540, that the scene of the Nailing to the Cross has been dated, as well as being attributed to Hone’s own hand (Wayment 1972).

Like Flower before him, Hone was of Continental origin. Both men demonstrate not only how, in the early sixteenth-century, the monopoly of the London guild was successfully challenged by Flemish and German glaziers, but also that it was these foreign glaziers who were taken to the hearts of the country’s most powerful patrons. A native of Holland, Hone had been working in England from at least 1517 when he was employed at Henry VI’s other collegiate foundation, at Eton, and he replaced Flower as the King’s Glazier by 1520. Through the late 1520s and 1530s he was much in demand and, it has been noted, worked on a range of high-status projects in addition to King’s College Chapel, including York Place, later Whitehall Palace, (1531), Westminster Palace (1532), Hampton Court (1532–33), Windsor Castle (1533), Dartford (1540) and St James Palace (1543) (Marks 1993). In common with many European glaziers who had come to England, Hone took up residence in Southwark, just beyond the jurisdiction of the powerful London craft. He died c.1551, having become the focus of attack from native craftsmen. The King’s College Chapel glazing, however, shows that co-operation and collaboration between English and Continental glaziers was possible, and that the former were able to absorb completely the techniques and styles of the latter. The 1526 contract between Hone and the college names a number of obviously native glaziers (Bond, Reve and Symondes), whose painting style cannot be distinguished from that of their foreign colleagues.

Stylistically, the chapel glazing, particularly that of its earlier windows, shares close connections with a group of high-status schemes elsewhere in England, and most notably those at the parish church of St Mary at Fairford, Winchester Cathedral, and Henry VII’s elaborate Lady Chapel at Westminster Abbey. In terms of composition, a fully ‘pictorial’ approach, ignoring the architectural divisions of the window, can be seen in the relatively complete surviving schemes at King’s and Fairford, whilst common motifs, such as the insertion into tracery openings of an angel holding a shield by a long strap, can be found (or has been recorded photographically) at each foundation. A common factor between at least three of these four glazing schemes, which may suggest the employment of the same or related craftsmen, is an association with Richard Foxe, Bishop of Winchester since 1501. Foxe served as executor of Henry VII’s will, which was much concerned with the completion of his Lady Chapel at Westminster, and was named in the King’s College glazing contracts as being responsible for the scheme; he also commissioned the glass of this style at Winchester.

Iconography The 1515 memorandum makes clear that the glazing was to be carried out ‘in such forme and condition as my Lord (Foxe) of Winchester shal devise and commande to be doone’, and this ultimate control of a single figure in creating the scheme at King’s most probably accounts for the relatively rare example in medieval English glass painting of a coherent iconographical programme. The programme at the chapel seems, however, to be based in essence on traditional, rather than highly personal, choices. Typological schemes of New Testament ‘types’ alongside Old Testament ‘anti-types’, as found in the chapel’s lateral windows, had a long tradition in England in various media, including glass. Examples from the twelfth and thirteenth centuries are the schemes at Canterbury and Lincoln, and from the fifteenth century are the schemes in the cloisters of St Albans and (most probably) Peterborough, in the churches at Tattershall and Fairford, and the now lost glazing of Henry VII’s chapel at Westminster. East windows featuring episodes from Christ’s Passion, and in particular the Crucifixion, were even more ubiquitous. At King’s, these episodes include, reading from the bottom left corner of the window, the condemned Christ presented to the people in a scene known as the ‘Ecce Homo’; Pilate Washing his Feet; Christ Carrying the Cross; Christ Nailed to the Cross, from which our panel is taken; the Crucifixion, in the top centre of the window; and finally, the Descent from the Cross.

Christ’s Passion, and in particular his death and Resurrection, marked, of course, the beginning of the Christian faith, and it was perhaps natural to place images representing it in the windows illuminated by the rising sun at the beginning of each day. In the late Middle Ages, however, the vogue in both monumental art, in the form of stained glass windows and painted altar pieces, and in manuscript art, such as Books of Hours, was for extended narrative sequences of the Passion that included scenes and details not described in the brief descriptions of events offered by the Evangelists’ accounts. There is no explicit reference, for example, in the account of the Crucifixion to Christ being nailed to the cross, and certainly not to the presence of a joiner with his bag of tools at the scene. Rather, these extrapolations represent a late medieval fascination with the gritty details of Christ’s suffering, found also in commentaries on the bible and other religious tracts. With regard to the joiner in particular, it has been suggested (Wayment 1972) that his inclusion in the foreground of the scene may have been prompted by descriptions such as that in the fourteenth-century Meditations on the Life of Christ, where the reader is told to imagine, as Christ nears the place of execution, ‘some arranging the cross on the ground, others getting the nails and hammers ready, some others preparing the ladders and tools needed’. More generally, many of the King’s College scenes are directly influenced by woodcuts of biblical episodes, produced by artists such as Albrecht Dürer and others, themselves influenced by tracts such as the Meditations.

Our Picture Archive includes further images of the glass at King’s College Chapel. It also features numerous images from Fairford, and some from Winchester Cathedral in the same style as the King’s glazing. Images of the Crucifixion sequence are found throughout England over the span of the Middles Ages, but representations specifically of the Nailing to the Cross are less common. The Picture Archive contains a depiction of the scene at Great Malvern Priory (Worcs.) by a different, native, workshop (see above).