Each month, Vidimus show-cases a different panel from the wealth of medieval stained glass in England. The panels are chosen with the aim of providing, collectively, a sense of the great range of surviving window glass, in terms of date, subject matter and the kinds of institutions for which it was made. The selected pieces will also relate, in various ways, to some of the broader issues being raised in the study and conservation of medieval glass, such as fashions in window forms and techniques, or approaches to the restoration of medieval glass. 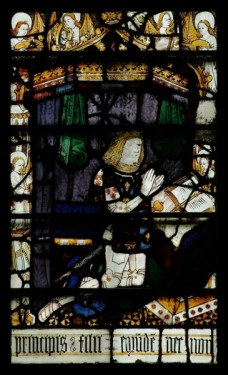 This issue’s panel is taken from the north-facing window of the north transept of Great Malvern Priory, and is dominated by an image of Arthur, Prince of Wales (d. 1502), eldest son of Henry VII and elder brother to Henry VIII, kneeling before a covered desk (which supports an open book) and beneath an elaborate, three-sided canopy. The hangings have been looped up to reveal the scene, and angels playing a variety of instruments surround the canopy. It has been chosen for presentation in this month’s issue of Vidimus for the significance of its subject matter, the importance of the glaziers’ workshop thought to have carried out the work, and as representative of one of the best-surviving late-medieval stained glass schemes in England.

The Priory: Foundation and History

An entry in the annals of Worcester Cathedral Priory for the year 1085 records the foundation of a monastery at Great Malvern by one Aldwin, a monk. Charters of Henry I, confirming to the priory gifts of land made by Edward the Confessor, indicate that this Benedictine house was not the first religious settlement at the site, but the exact nature of the institution is unclear. In the mid-fifteenth century, the monastic community at Malvern presented one version of the monastery’s pre-Benedictine history in a window in the north choir clerestory (NIV). The glass, which made reference to the Confessor’s donations, told of the visions of a monastic figure named Werstan (in which angels selected a site among the Malvern hills and consecrated the small chapel built there), and of the ultimate martyrdom of the monk and his small community at the site. But the lack of medieval reference to a saint named Werstan seems to suggest that the window serves more as an expression of the Malvern community’s desire for a sanctified site for their house than as a record of historical fact.

Relatively little is known about the priory or its community until the near-complete rebuilding and reglazing of the monastery church over the course of the fifteenth century (the Norman pier arcades of the nave were retained). The architecture of the new church was heavily indebted to that of Gloucester Cathedral – a result, it would seem, of both the wide-spread influence of the building in which the Perpendicular style of architecture was put to early dramatic effect, and also, perhaps, of the Malvern community’s wish to identify with a particularly impressive example of a Benedictine monastery. (Beyond its architecture, Gloucester Cathedral was home, for example, of the tomb of Edward II.) The Malvern stained glass formed a complex iconographic scheme, giving expression to a number of facets of the monastery’s identity, interests and allegiances.

Less than half a century after the completion of these works at Malvern (to the very final phase of which the stained glass panel showing Prince Arthur belongs), the Benedictine monastery at Malvern was dissolved. The small town that had grown up around the monastery petitioned the king for the purchase of the priory church, offering to pay the £20 demanded for it in two £10 instalments. The building has served as the parish church of Great Malvern since this time.

The Production of the Panel

No contract survives for any part of the medieval glazing scheme at Malvern, but internal evidence, such as the identify of the figures represented in the glass and the particular styles in which it is painted, frequently provides a useful indicator of the date at which a window was made, and who was responsible for it. In the case of the window in which Prince Arthur appears, the inscription that ran along the foot of the window used a form of words suggesting that the individuals represented in the glass were living persons, and made reference to the prince’s ‘most delightful consort’ (Katherine of Aragon). The wedding took place in mid-November 1501, suggesting that the window was created at some point between this date and the prince’s death five months later.

The style in which the north transept window is painted is characteristic of a workshop recorded in one set of surviving glazing contracts as being headed by glaziers named Richard Twygge and Thomas Wodeshawe. The faces of their figures are rather blocky in appearance, with generally little modelling or delicacy of touch evident; the great strength of the workshop lie in its technical ability and decorative techniques. The colour palette is rich and strong: note the vivid blues, greens and purples, and deep gold, of the panel. Almost every surface is intricately decorated: the upper edge of the canopy is elaborately cusped, the scabbard of Arthur’s sword delicately patterned in white on a black ground, and golden roundels stud the base of the desk. Arthur’s heraldic tabard demonstrates the workshop’s competence at intricate glass cutting (gold fleur-de-lis are leaded into a blue ground) and at delicate manipulation of the glass (the gold lions of England are created by abrading a layer of ruby glass and staining the area yellow).

Twygge and Wodeshawe appear to have been active in the Worcestershire area from the mid-1470s, but following the painting of the east window of Little Malvern Priory for Bishop Alcock of Worcester between 1480 and 1482, they served high-status patrons across the country, including Bishop Waynflete of Winchester (as he completed Ralph Lord Cromwell’s work at Tattershall College (Lincs.)) and the Abbot of Gloucester (where they worked alongside Continental glass painters in the abbey’s new Lady Chapel). In the early sixteenth century (1507–10), a Richard Twygge (it is unclear what had happened to Wodeshawe) is recorded at work in the nave of Westminster Abbey. Here he is described as either ‘of’ or ‘from’ Malvern. The reference possibly indicates that Twygge was based in the town (an observation perhaps supported by the Worcestershire focus of the workshop’s early commissions). Alternatively, it may be a reference to the window in which Prince Arthur appears, describing Twygge with reference to his last major piece of work.

This image of Arthur belongs, at one level, to one of the most popular iconographic forms of the late Middle Ages: the figure kneeling in prayer, accompanied by an inscription calling for prayers for the salvation of the soul. Typically referred to as ‘donor figures’, on the assumption that they represented the individuals responsible for the windows in which they appear, these images are beginning to be understood as more complex and varied in their interpretation. They are known, for example, to represent individuals long-deceased by the time of the window’s creation, and are sometimes arranged in sequences unlikely to reflect the active choice of those they denote. Arthur appears in the Malvern window alongside similarly posed images of Henry VII, Elizabeth his queen, and three knights in the king’s court, Sir Reginald Bray, Sir John Savage and Sir Thomas Lovell. Below them ran the inscription ‘Orate pro bono statu nobilissimi & excellentissimi regis Henrici septimi & Elisabethe regine ac domini Arturis principis filii eorundem nec non predilectissime consortis sue & suorum trium militum predictorum’ (‘Pray for the good estate of the most noble and excellent king Henry the Seventh and of Elizabeth the queen, also of the lord Arthur their first son and as well as of his most delightful consort and of his three aforementioned knights’). The name of each knight was inscribed on his desk cloth. The presence of the three knights, in conjunction with the omission of any representation of or reference to other members of the royal family, suggests that the window was the gift of the trio, made on behalf of the king, queen and first-born son, perhaps to commemorate the royal marriage to Katherine.

The sequence of royal and knightly kneeling figures is set out at the foot of one of the church’s largest and most prominent windows, otherwise devoted to the subject of the Magnificat, or Song of the Virgin, from the Gospel of St Luke (I, 46–55, Fig. 1). The scenes, depicting the events of the Incarnation from the Annunciation to the Coronation of the Virgin, correspond to, and are set beneath, the verses of the canticle. This subject matter was appropriate to the figures set below it – Henry VII is known to have had a particular devotion to the Virgin, noting in his will, for example, that he had long looked to her for special guidance. It spoke also of the interests of the monastic community at Malvern, where the Virgin occupied an important role as one of the church’s patronal saints (in conjunction with St Michael the Archangel), and where the Magnificat was performed as part of the regular liturgy.

Fig. 2. Painting by John Carter of this month’s Panel of the Month.

In the context of English medieval stained glass, the Magnificat window at Malvern is significant for the way in which the image of the Coronation of the Virgin was executed, apparently inspired by Continental practices. The vesica of blue cloud in which she stands, in the upper half of the window, traverses three lights, ignoring the window mullions that traditionally defined the elements of glass iconography, and creating what has been termed ‘the only fully-fledged ‘picture’ window by indigenous glass-painters’ (Marks 1993). In the centuries after the Reformation, when interest in the country’s medieval glass heritage was at its nadir, this image of Arthur, along with that of his father Henry VII, was, thanks to its royal rather than saintly nature, one of the first from the priory to attract attention. A copy of it was painted by John Carter (Fig. 2), for example, to illustrate his 1780 volume for the Society of Antiquaries, entitled Specimens of the Ancient Sculpture and Painting Now Remaining in England, from the Earliest Period to the Reign of Henry VIII, Consisting of Statues, Bas-Reliefs, Busts, Sculptures, Brasses, Monumental Effigies, Paintings on Glass, Walls and Panels,…etc.
Bibliography and Further Reading

The CVMA (GB) Picture Archive includes more than four hundred images and illustrations of the medieval stained glass at Great Malvern Priory, including forty-five of the Magnificat Window.