This summer presents a number of opportunities for admirers of the arts and architecture of the Middle Ages, in which stained glass takes centre stage, to purchase their own piece of the medieval past.

First, two important English medieval manor houses with surviving remnants of their original glazing schemes have been offered for sale (May 2019).

According to the stained glass historian and CVMA author, Dr. Richard Marks: ‘The great hall (of such medieval houses –ed.) was the principal focus of heraldic display; it was here that the medieval lord feasted in state, with guests and household; here he could demonstrate his wealth by the lavishness of his hospitality and by the splendour of the architecture and fittings; equally the importance of his lineage and political connections were underlined by the shields of arms in the windows’.

Athelhampton House, near Puddletown in Dorset, was built c.1485 by Sir William Martyn, Lord Mayor of London in 1493, and extended by his heirs throughout the 16th century. The Great Hall features a four-light window in the north-east wall which includes both 16th-century quarries with monograms and also elaborate armorial achievements including those of Faringdon, Martyn and de Pidele. The fourth light has the crest of Brune, apparently original, above a modern shield of Mohun. [Fig.1]

Ockwells Manor, near Windsor, Berks, was built in the 1440s by Sir John Norreys who was Keeper of the King’s wardrobe in 1444 and two years later Treasurer of the Chamber and Master of the Jewels of Henry VI’s formidable queen, Margaret of Anjou.

The house is entered by a porch at one end with a spectacular open great hall to the right. Within the hall is the best-surviving example of the splendid heraldic display to which great hall glazing aspired in Medieval England. The windows on the right (east side of the hall) include c.1460 armorial achievements, with shields of arms, mantling and cresting, together with scrolls inscribed with royal and other mottoes in stained glass, possibly made by the King’s glazier John Prudde. The heraldry includes the arms of Henry IV and Queen Margaret and various nobles, dignitaries and friends of Norreys, in addition to the arms of the family itself. [Figs 2 and 3]

A range of smaller-scale treasures from the Middle Ages, including a number of stained glass panels, are also soon to be on offer in Medieval Art in England, an exhibition by Sam Fogg, London. The product of almost twenty years of collecting objects that have miraculously survived religious reform and iconoclasm, war, neglect and the vicissitudes of fashion, the exhibition of some 70 items reflects and illustrates vividly the once rich, polychromatic abundance of arts once housed in the churches and cathedrals, castles and cottages of medieval England.

Alongside examples of liturgical furnishings and vestments, manuscripts, sculpted alabaster and tableware, spanning almost a thousand years, are the remains of religious, heraldic and domestic glazing schemes. Among the most eye-catching, perhaps, are a pair of sweetly-painted, small-scale panels depicting the deacon saints Lawrence (with his gridiron) and Stephen, dating to the mid-fifteenth century, representative of the sequences of saintly figures that so frequently inhabited the tracery openings at the heads of medieval church windows (Fig. 4). From the following century, and a very different context, is the elaborate and skilfully-painted heraldic escutcheon with the arms of Henry Manners, 2nd Earl of Rutland (1526-63), possibly made originally to adorn the family home at Belvoir Castle (Fig. 5). 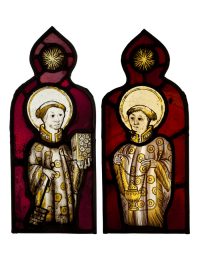 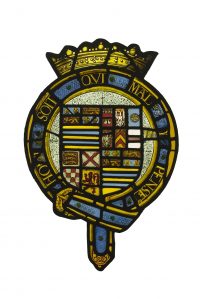 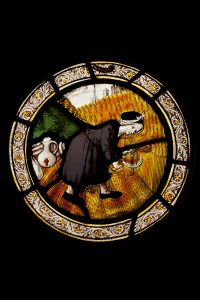 Also included in the exhibition is an exceptionally fine early sixteenth-century roundel, depicting a woman reaping (Fig. 6), possibly representing the month of August, with which readers of Vidimus may already be familiar. Belonging to the best-surviving English series of roundels depicting the Labours of the Months, known as the Brandiston Hall roundels, after the house for which they were purchased in the nineteenth century, they are believed to have been made for the home of the mercer and three-time mayor of Norwich, Thomas Pykerell, around 1525. Their story was explored by CVMA Author and Norfolk glass specialist David King in a previous issue of Vidimus.

The Medieval Art in England exhibition will run from 27th June – 26th July at Sam Fogg, 15D Clifford Street, London W1S 4JZ. A PDF catalogue will be available to download from the website (www.samfogg.com) before the exhibition opens.