COLLECTING THROUGH CONNECTIONS: GLASS AND STAINED GLASS COLLECTORS AND THEIR NETWORKS IN THE 19TH CENTURY

In 2015 an international conference was held in Portugal prior to the opening of an important exhibition of European stained glass at the National Palace of Pena in Sintra, Portugal. The exhibition included many pieces from the 14th – 17th centuries.

This month’s ‘From the Archives’ feature includes a link to a beautifully-illustrated publication which accompanied the exhibition. It consists of papers presented to the conference from scholars based in Portugal, Germany, Belgium, France and the USA. The text is in English. 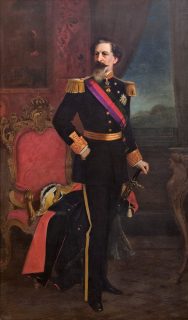 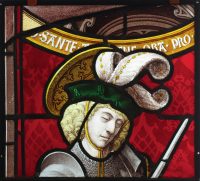 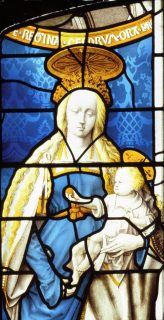 The collection was part inherited and part assembled by Ferdinand of Saxe-Coburg and Gotha (1816-1885), a German prince who married Queen Maria II of Portugal in 1836 and took the title King D. Fernando II after the birth of their first son.

After his marriage Ferdinand installed the panels at both Pena and the royal palace at Necessidades in Lisbon. [Fig. 1]

Collecting through connections: Glass and stained glass collectors and their networks in the 19th century, includes contributions by Daniel Hess from the German national museum in Nuremberg on the art-historical context of Ferdinand’s collecting; an exploration of the origins of the collection by Márcia Vilarigues et al; an account by CVMA author Daniel Parello of a contemporary collection of stained glass at Neueberstein Castle formed by Archduke Leopold von Baden (1790‑1852), and a case study by Ulrike Müller of the stained glass collected by Mayer van den Bergh now shown in the museum of the same name in Antwerp. Caroline Blondeau-Morizot adds a well-researched chapter on the fate of some 15th century windows from Rouen Cathedral that were ‘stolen’ and subsequently sold to collectors on the international art market while Yao‑Fen You from the Detroit Institute of Arts, Michigan, USA, provides fascinating evidence about the origins of some early sixteenth-century glass that was removed and sold from Stoke Poges church in Buckinghamshire, England, in 1929 and which is now in the Detroit Institute of Art, USA. This latter essay will be of particular interest to students of the trade in displaced glass between England and the continent in the early years of the 19th century. [Figs 2 and 3]

The publication also includes chapters on decorative and vessel glass.