The Path to Paradise

The Path to Paradise: Judith Schaechter’s Stained-Glass Art (Fig. 1) is the companion publication to the travelling exhibition of the same name currently on view at the Memorial Art Gallery of the University of Rochester, New York (MAG). Due to the COVID-19 pandemic, the period of exhibition has been extended at MAG, thus the dates for the Toledo Museum of Art in Ohio, and the Des Moines Art Center in Iowa will differ from those listed in the book. This exhibition is the first major survey of American artist Judith Schaechter’s work, and features a selection of over forty stained glass panels, produced over nearly as many years, along with drawings, sketchbooks, and other process materials. Works have been lent from private and institutional collections, including the Carnegie Museum of Art, Corning Museum of Glass, and the Philadelphia Museum of Art, in Schaechter’s hometown.

The book, richly illustrated with Schaechter’s own striking work, comparative pieces, and the plates of the exhibition catalogue, brings her work vividly to life. Following a foreword by MAG director Jonathan P. Binstock, the first half of the book consists of an introduction by Glenn Adamson (Yale University), and three insightful chapters by Jessica Marten (MAG), Diane C. Wright (Toledo Museum of Art), and preeminent stained-glass scholar Virginia Chieffo Raguin (College of the Holy Cross). Between Marten and Wright’s chapters is an illuminating interview of Schaechter by Marten. The remainder of the book comprises the exhibition catalogue, whose chronological arrangement gives valuable perspective on Schaechter’s development as an artist, Schaechter’s impressive curriculum vitae, and a selected bibliography, which is far from brief and of great interest. This dazzling book will leave the reader in no doubt that Judith Schaechter merits a rightful position in the annals of the history of art, and the history of stained glass in particular. 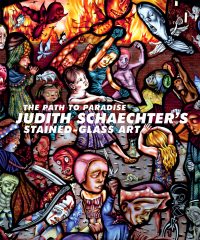 Fig. 1. The Path to Paradise (Image courtesy of RIT Press) 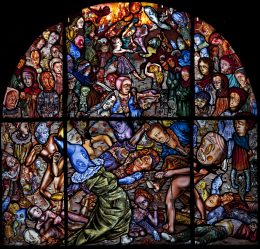 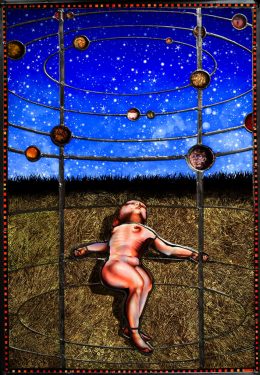 The contributors approach Schaechter and her work from different, yet complementary, angles. The introduction touches on Schaechter’s work in the context of art history, but, in contrast to the chronological format of the exhibition catalogue, the subsequent chapters largely chart a course from the present to the past. This is effective for a publication of a current exhibition, as the reader feels immediately part of this culminating moment. Adding to the sense of intimacy with the work is the interview with Schaechter herself. The authors’ diverse analyses, and even areas of observational overlap, make for captivating reading. It is fascinating that, aside from the thirteenth-century South Rose Window from Notre Dame Cathedral in Paris, pictured in Wright’s chapter, the comparative illustrations are not stained glass at all – rather paintings and drawings, sculpture, photography and film, performance, and religious objects. The authors’ eclectic choice of comparative work evinces how Schaechter’s work in many ways defies definition and expectation.

Schaechter’s provocative subject matter is a prominent theme in the book from the outset, leading Adamson to declare in his introduction that Schaechter must be “the only stained-glass artist in history whose work warrants trigger warnings.”1 Adamson compares the chaotic modern satire of Schaechter’s work, The Battle of Carnival and Lent (2010-2011) (Fig. 2), with that of Pieter Bruegel the Elder’s painting, The Fight Between Carnival and Lent (1559). This comparison is echoed by Marten, who also, along with Raguin, likens the grotesqueries depicted in Schaechter’s work to the cacophonous paintings of Hieronymus Bosch. What Schaechter has in common with these Northern Renaissance masters is the timely creation of “carnivalesque”2 worlds of social inversion, brought to life in a riot of figures and minute detail.

Adamson notes an important distinction from these masters, however: Schaechter’s chosen medium of stained glass, laden with ancient spiritual associations and provoking a visceral reaction to its resplendence, automatically elevates what is depicted to a state of transcendence. Besides her often-unsettling imagery, a salient characteristic of Schaechter’s work is its breathtaking and awe-inspiring beauty. From an earlier interview cited by Marten, Schaechter states that her obsession with creating beauty serves to “seduce people into looking at something they would otherwise not want to deal with.”3 It is by depicting the “mucky wells of human experience” in stained glass, Adamson argues, that Schaechter is able to infuse these grotesqueries with a “heavenly grace.”2

In the first chapter, Jessica Marten further explores Schaechter’s intrepid portrayal of “dark and mysterious narratives,”4 contextualized within the scope of contemporary art and culture. Marten analyzes how Schaechter’s exaltation of the grotesque in stained glass acts as an agent of social transformation. Schaechter’s injection of, often grim, modern narratives into this essentially medieval medium transports the traditional artform to the realm of twenty-first-century contemporary art. One area of subversion is Schaechter’s deeply intimate depiction of women. Works such as You Are Here (2008) (Fig. 3), which “demystify female corporeality,”5 upend traditional Christian iconography. Marten argues that Schaechter’s poignant departure from convention and her feminist sensibility force us to “love what is loathsome”6 and to face the “fraught and evolving gender, body, and sexual politics in America.”7 Marten’s analysis ultimately positions Schaechter as a cultural visionary, and segues seamlessly into the following chapter. 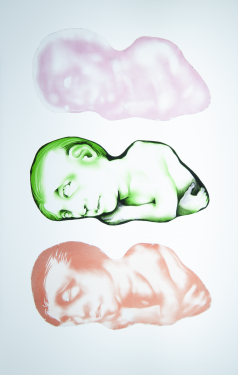 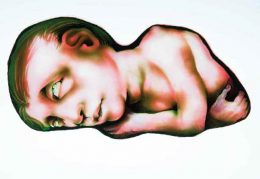 The interview with Schaechter in the second chapter reveals more of her personal history and philosophy in her own bright and witty voice, giving the reader a greater appreciation of her and her work. Schaechter describes how engaging the inspired rapture of artmaking was her response to growing up as an atheist, without the existential certainty of religion. Her description of her creative process, grounded in disciplined labor, yet driven by the pursuit of an egoless “divine inspiration,”8 is exhilarating to read. Schaechter regards making art as a spiritual practice, where her audience is not herself, or we the viewers. It is the “third thing, be that ‘at-oneness,’ or connectivity, or even a higher power.”9 A topic introduced by Marten in the previous chapter and expanded upon by Schaechter is what Marten refers to as the “art-versus-craft binary.”10 Schaechter, who identifies both as an “artist” and “craftsperson,”11 acknowledges the legitimate and arbitrary aspects of this hierarchy, concluding that “things can be ‘equal’ without being ‘the same.’”12 Another theme from the previous chapter revisited in the interview is Schaechter’s self-described “Militant Ornamentalism,”13 which unapologetically prioritizes beauty and intricacy – an about-face from the cool postmodernism of the art world she came up in. Schaechter describes how she is “willing to go to all lengths to make the piece as hard as possible to execute,”14 because the degree of detail should convey just how important the work is.

Schaechter’s laborious manual technique is described in detail by Diane C. Wright in the third chapter. Though she uses the typical opalescent glass sparingly, Schaechter integrates the traditional American techniques of extensive use of plating and copper foil construction. Schaechter begins by scanning her preparatory sketches into Photoshop for digital manipulation and amalgamation. Then, on traditional European mouth-blown antique flashed glass, she uses modern subtractive techniques – sandblasting, flex-shaft engraving, and diamond-file abrasion – to coax her imagery from the glass. After firing a selective application of vitreous paint, enamel, and silver stain, Schaechter creates stacks of up to five plates of glass, painstakingly etched in complementary overlays, to assemble the final composition (Figs. 4, 5). While some explanations are geared towards the lay reader, Wright’s chapter will be of particular interest to stained-glass practitioners and scholars, as she describes Schaechter’s adoption of new technologies, alongside historical methods, in generous detail.

The final chapter by Virginia Chieffo Raguin provides an art-historical perspective of Schaechter’s work, beginning with a look to the Middle Ages. Raguin elaborates on the theme of art as a spiritual vehicle. She notes how a panel like Schaechter’s Exquisite Corpse (2002) (Fig. 6), which situates a central figure within a plethora of flora, fauna, scientific, and geometric motifs, is similar to a Christian reliquary, whose central scene is surrounded by subsidiary imagery and encrusted with precious metals and gemstones. Raguin argues that Schaechter’s work is affective like a reliquary, which was designed to bear a reminder of suffering and triumph, and to “force confrontation with the inexplicable reality of existence.”15

It is via these metaphysical musings that we come to make sense of the title of the exhibition and book, The Path to Paradise, and the formidable nature of Judith Schaechter’s work. Raguin’s chapter opens with a brief recounting of The Divine Comedy, where blockage of a direct path to heaven forces Dante to pass through the realms of Hell and Purgatory, before the ascent to Paradise. Schaechter’s “mingling of the repulsive and the transcendent”16 encapsulates a similar trajectory. Through proximity to her work, which forges together the basest and most sublime aspects of human experience as an act of devotion, we are given access to that dimension Schaechter describes, “where and when consciousness connects and becomes greater than the sum of its parts, but also no longer particulate at all but integrated, dissolved, into the cosmos.”17 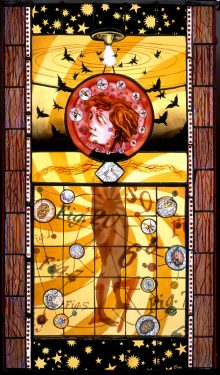 The Path to Paradise: Judith Schaechter’s Stained-Glass Art will remain at the Memorial Art Gallery, University of Rochester, New York, until 13th September 2020.