Apothecaries’ Hall, home of the Worshipful Society of Apothecaries of London, contains a large collection of armorial bearings in various media, but most particularly in stained glass. This comprehensive book describes the derivation and display of the Society’s Arms, the Royal connections which also provide a source of heraldic decoration, and the large collection of glass panels relating to the coats of Arms of many of the Past Masters and Honorary Freemen. A comprehensive survey of all the heraldry and of the artists involved is included.

For twenty years a tenant at the Hall was the renowned stained glass artist Carl Edwards. Heraldry and Stained Glass at Apothecaries’ Hall gives a glimpse of the working of a glass studio and is also a reference source for the glass produced by Edwards at the Hall. Although Apothecaries’ Hall is well-known to some members of the medical, dental and pharmaceutical professions, this beautifully illustrated publication brings all the information about heraldry and glass associated with the Society to a wider audience.

As the standards of design and production of 19th-century stained glass were raised, it drew the attention of Fine artists. Active on the periphery of the Pre-Raphaelite circle, the five artists considered in Saints & Symbols were responsible for varying the medium in their individual ways. All were strongly influenced by and were associates of William Morris. Although well known in other fields their work in stained glass has not previously been investigated to any great degree.

Ford Madox Brown introduced a form of social realism, his colleague, Frederic Shields interpreted his role as a mystic, to add an exotic touch, whilst William De Morgan was one of the first craftsmen to be entirely responsible for production, anticipating the Arts & Crafts Movement. John George Sowerby introduced art into his manufactory in an attempt to upgrade its produce whilst his friend Walter Crane, famous for his paintings, book illustrations and other craft, regarded stained glass as equally as important as any other form of art. 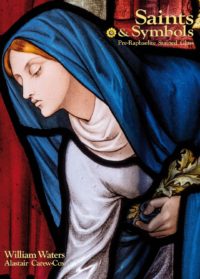 We encourage readers to take a look at the special issue of the journal 19 (Issue 30), Reframing Stained Glass in the Nineteenth-Century British World: Culture, Aesthetics, Contexts, which is available online at https://19.bbk.ac.uk/issue/302/info/

Stained glass was a ubiquitous art form in the nineteenth century, present in churches, railway stations, museums, and homes. Nevertheless, it has rarely been discussed outside of specialist fields. This issue of 19 brings together scholars from across a range of disciplines in order to examine, interpret, and reframe stained glass from the widest possible variety of perspectives in order to demonstrate its rich potential. An impressive collection of papers explores how this entrepreneurial and technologically innovative medium used ‘traditional’ forms not just to articulate well-worn stories, but to tell new ones in self-avowedly modern settings, revealing much about nineteenth-century culture, aesthetics, and contexts.

The journal is open access and can be freely downloaded. It was published in August 2020, but was accidentally omitted from our October publication notices.