This section is intended to enable authors to raise points of interest and related queries. If you would like to respond publicly to a note or query, or to submit your own, please email editor@vidimus.org 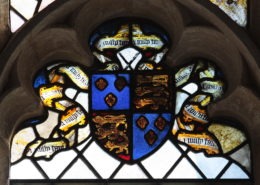 The heads of the five main lights of the east chancel window of c. 1435 in Ketteringham Church in Norfolk were each glazed with a shield of arms, of which four survive. The borders of the heads had in the first two and last two lights foliage spiralling round a rod and small devices which would have identified the now missing figures below. The crossed keys and crossed swords in the outer lights were for St Peter and St Paul, to whom the church is dedicated, and the MR monogram and the letter I in the second and fifth lights, for the Virgin Mary and St John, pointing to a now-lost Crucifixion in the three centre lights. The border of the head of the central light is different, and forms the subject of this note.

A long scroll is wrapped round a rod, bearing ten times an inscription: ‘a nully tant’. This, one could imagine, would be a motto, relating to the donor, Henry Grey, Esq., whose arms and figure, partly extant, were in the main light at the bottom. After much searching, it has been possible to identify the source of this text. This was only possible once it was realised that ‘nully’ was a known variant of the Old French word ‘nului’, meaning ‘to nobody’. Thus the whole means ‘to nobody so much’. ‘a nului tant’ appears in the thirteenth-century Arthurian manuscript ‘Le livre de Lancelot del lac’, in the sentence ‘Car je ne doi a nului tant de foi comme a vous qui estes ma dame et ma meire’ (For I owe to nobody as much faith as to you, who are my lady and my mother).1 This is addressed by Lancelot to the Lady of the Lake, who took over the role of mother for him when he was a young child and brought him up.

However, this would be rather unusual as a motto for a fifteenth-century esquire and in fact should be seen, I think, as an invocation to the Virgin Mary. The words of the sentence from which it comes could equally as well apply to the Virgin (often called ‘mater misericordiae’ – ‘mother of mercy’).   In support of this interpretation, immediately above the texts are depictions in the tracery lights of the Annunciation to the Virgin Mary and of her Coronation. The polyvalence of text as used here does accord with other examples of double meanings in words and image in Norfolk fifteenth-century glass.2 However, the use of a quotation from Arthurian literature is extremely unusual.  I would be grateful for any comments, including if possible further examples of the use of such texts.