Following publication of this edition in 2019, David King assesses what these accounts reveal of glaziers and glazing in sixteenth-century Norwich. 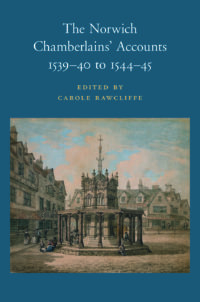 Norwich is fortunate in the extent of its surviving civic records from the Middle Ages and the early sixteenth century. The problem with such a large amount of material is that much remains unpublished and unknown to all but a few. The admirable Norfolk Record Office has an excellent online catalogue of its collections, but financial constraints have not allowed any extensive digitisation of the material, such as has been achieved at the National Archives in Kew. Professor Carole Rawcliffe has now added to the available resources by transcribing and editing the Norwich City Chamberlains’ accounts (written in English) for a particularly interesting period of the city’s history for Vidimus readers, which involved much work on the part of the Norwich glazing community. The resulting book contains the only complete transcription of any of the accounts.

The office of City Chamberlain from the mid-fifteenth century developed out of that of City Treasurer, an office held by the Norwich glazier John Wighton in 1435. As well as keeping the municipal accounts, the City Chamberlain had the added responsibility of ordering and preserving the civic records. Only a few years’ accounts for the second half of the fifteenth century are extant, but that for 1470 includes a fascinating record of the expenses occurred for the visit to the city in 1469 of Queen Elizabeth, wife of Edward IV, for which it was intended to mount two welcoming pageants depicting the Annunciation and Visitation on her arrival. In the event the second was cancelled because of a cloudburst.1 The accounts list payments made to John Mundeford, glazier, the leader of the John Wighton Workshop in Norwich after Wighton’s death in 1457, for his contribution to the Annunciation pageant. They suggest that he arranged for the mechanical descent of the dove and the Christ Child to Mary on beams of light, using whip cord, tinfoil and nail, just as is depicted in the Annunciation panel from the Toppes Window in St Peter Mancroft, painted almost certainly by Mundeford himself.2 The part of Mary was played, it would appear, by his son, possibly the Henry Mundeford who died in 1518 as a priest and was buried at St Mary Coslany, Norwich, like John Wighton, his father’s master.3

The main reason the later accounts transcribed by Rawcliffe are of interest to Vidimus readers is that they cover the period when the Dominican friary in Norwich, having been dissolved in 1538, was bought from Henry VIII by the city (led by the mayor, Augustine Steward), in 1540, to use as a civic chapel in the chancel and a meeting hall in the nave. The church and parts of the outbuildings are still in civic use today and represent the best surviving Dominican site in the country. Between the dissolution and the acquisition by the city, the friary had fallen into disrepair, requiring much renewal, and much further work was needed to convert it for civic use. This involved some removal of the extensive programme of painted glass in the church, chancel and outbuildings, some minor repairs of it, and the acquisition of some of the heraldic glass for resale by a glazier.4 Several other municipal buildings were also being built or repaired at this time, and they, too, required the attention of glaziers.

Although the emphasis in this review will be on what the accounts reveal of glaziers and glazing in sixteenth-century Norwich, readers can be assured that they also contain much other fascinating information about civic life, including the life and work of artisans of many kinds, the construction and maintenance of buildings and waterways (the ‘cockeys’ of Norwich, which today run beneath the streets), the rapid enlistment and equipping of men to be sent to fight Henry VIII’s unsuccessful military campaigns, the lobbying of and lavishing of gifts on great men such as the Duke of Norfolk to gain their agreement to the city government’s proposals, the contrasting poverty and hunger caused by economic downturn and poor harvest, and the constant need to clear the mountains of rubbish which blocked streets and gulleys. There is a fascinating introduction setting the role of the chamberlains and the content of the accounts in their historical context. After the transcribed and annotated accounts are a number of appendices, including an inventory of movables belonging to the city in 1552 and a very useful glossary and word list, with many now obsolete words for various craft activities. The index is full and usefully arranged. 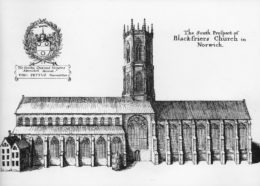 The first topic to be examined here in more detail is that of the glaziers named in the accounts. Of the twenty glaziers known to have been working in Norwich in the first half of the sixteenth century, twelve are mentioned, which gives an indication of the extent of the civic building works being carried out at this time. In a feature in a previous edition of Vidimus a large body of heraldic glass of the sixteenth century which was made in Norwich was described and divided into style groups.5 The first group was very tentatively ascribed to a workshop led by John Carre.6 He was clearly a craftsman of some substance, becoming free in 1521, in 1539-43 a councillor for the wealthy Mancroft ward and a member of the Guild of St George in 1530-46. He owned property in three parishes in the city and wrote his will in 1557. Three apprentices are known, although there may have been more. Abraham Panworth became free in 1549, and in 1551 Thomas Manne and Richard Lathe, who signed some panels of heraldic glass probably made c. 1578. The last two men worked with Carre in 1540-1 on glazing one of the tenements on the former Blackfriars’ site. At that time they were not freemen, and were either still his apprentices, or were working as journeymen for him.

Carre and an otherwise unknown glazier, John Gaywood, worked together on the glazing of the kitchen of the friary site, Gaywood later working on his own on the windows of St Mary-the-Less. Whether he was part of the Carre team remains open. Another glazier who may have worked in Carre’s business is John Halybrede, free in 1555, but not apprenticed. He worked in 1541-2 on the glazing of the friary site together with Carre and other members of the workshop. In 1545 and 1547 he was a councillor for Wymer ward, implying a status sufficient for him to have owned his own business by this time. There is a single reference to a glazier called Gogle in 1540-1, when he was paid for glazing and mending two ‘fenestralles’ (window frames) in the council chamber in the Guildhall. This must be John Gogle, made free in 1539-40. He was left 12d in the will of John Carre in 1557, the only glazier mentioned there, which suggests some form of association between the two. There is also a payment to Thomas Monfford, glazier, in 1540-41, working with Halybrede, Lathe and other glaziers on a tenement at the friary. The name is one of the many versions of the name Mundeford, and thus Thomas may have been a descendent of the several glazier members of that family from the fifteenth century, all deriving from the Dutch immigrant William Mundeford, from Montfoort. Another glazier, John Clerk, was also working in the same group in that year, and both Monfford and Clerk are otherwise unknown.

The most interesting entry in the accounts concerns Carre himself, as it shows that he, or his workshop, still carried out glass-painting as well as repairs and plain glazing. In 1542-3 he was paid 2s for a new pane of glass in the east window of the chapel with a new image of St Catherine. The chapel was the former chancel of the Dominican church. As I have discussed elsewhere, this gives us some information about the original glazing of the friary, but also points to the fact that in 1542-3 a glazier could still paint a religious subject for a chapel window, despite the fact that the friary previously occupying that building had been dissolved. Henry VIII had by then banned depictions of St Thomas Becket, but it was not until the injunctions of his zealous son Edward VI in 1547 that religious imagery in general, including in windows, was forbidden in sacred spaces. Carre was also paid for repairing one pane in the east window of the north aisle in the hall (the former nave) that was broken all to pieces. It is known that the nave windows still in c.1575 had much heraldic glass and this repair may also have involved painted work. However, John Pylson had bought shields removed from the friary windows and Carre was also paid for taking down six panes in the hall windows and stopping them with nets.

Another glazier, this time almost certainly from Norwich, appears for the first time in the accounts for 1542-43. Stephyn Screvener was paid there for mending the windows in the kitchen and parlour of the Common Staithe. In 1544-45 he was paid for taking down all the glass in a city-owned tenement in Tombland, scouring it, and setting it up again mostly in new lead with ‘puttyng’ to much new glass. This is an interesting entry. If ‘puttyng’, as seems likely, was the chamberlain’s spelling for ‘puttying’, this is an early use of the term as applied to puttying or, more properly, cementing leaded lights. In the Oxford English Dictionary there is a single medieval use recorded of the word ‘putty’ as a noun in 1472, but there used in ‘puty disches’ for mortar. The first mention of ‘putty’ as a verb applied to glass is in 1789. Screvener does not appear elsewhere in the Norwich records I have seen, but in 1551 John Skrevenor, glazier, was made a freeman of the city, the son of a tailor.

The other type of information about glazing provided by the accounts is the rates of pay for work and materials. Three types of payment occur for the labour incurred, payment by the day, payment per square foot of glazing and payment for a specific piece of work. The normal rate of pay for a glazier for a day’s work was 6d. This was the same as at St Stephen’s Chapel, Westminster, in 1352 for glaziers working on cutting and leading-up glass.7 In 1540-1 some glaziers were paid less, probably because they were apprentices, the rate perhaps depending on how many years they had served and varying from 4d to 5d. Often, however, glaziers were paid by the square foot of glazing, rather than a daily rate. This was particularly the case for John Carre, John Pylson and John Halybrede, but also for John Gaywood and Stephyn Screvener. The normal rate here was 4d a foot, but this sometimes varied between just over 3½d and just under 5d. Sometimes a glazier was paid a lump sum for a job without precise indication of what it involved. Prices also varied according to where the materials came from, new glass being paid for, but often the glass was old glass recycled from a common store owned by the city. Burgundy glass was purchased from a builder’s supplier at 1s 6d a sheef, solder cost 4d a lb, nails were 8d for a thousand and candles, 1d a lb. These were provided to enable work to be done in the early morning and evening, when the days were short. On one occasion 6d worth of rosin was bought, presumably as flux for soldering.

Professor Rawcliffe has provided an invaluable documentation of this important few years in the life of the city of Norwich, bringing a rich harvest of detail to illuminate vividly the historical narrative and also adding to the picture we have of the life and work of glaziers at this time of transition.