Veiled Manhood in the Lady Chapel at Bristol 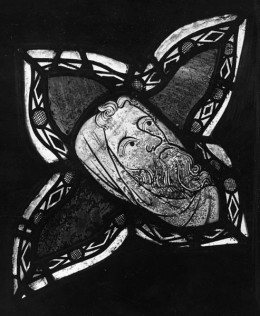 Veiled Manhood in the Lady Chapel at Bristol

Little original glass survives from the medieval glazing of the Lady Chapel in Bristol Cathedral. The tracery lights of the east window are thought to date from the original scheme of the early fourteenth century. They preserve a series of male heads and a series of heraldic devices. Four of the heads are shown wearing some sort of head cloth. In one of these, this month’s panel, the curls above the forehead spring up and over the cloth, demonstrating that the cloth is tightly secured round the head rather than loosely covering it. Such head coverings are usually indicative of female figures, of which one such fragment can still be found in one of the main lights below (Fig. 1) – yet the facial hair leaves us in no doubt as to the figure’s gender. Focusing on this tracery light in an exploration of the seeming incongruity of the costume serves to reconfirm the subject of the window as a whole.

In 1983, Michael Smith considered the fourteenth-century glazing of the Lady Chapel at length in his book surveying all of the stained glass in the cathedral. In particular, he fleshed out the art-historical context of the subject of the east window. Although extensively restored in the nineteenth and twentieth centuries, the window preserves the composition of a monumental Tree of Jesse. This allegorical subject formed a bridge between the Old and New Testament, presenting Christ and the Virgin as the product of Old Testament prophecy and lineage in the form of a symbolic ‘family’ tree. Since at least the third century AD, Isaiah’s prophecy that ‘egredietur virga de radice Iesse et flos de radice eius ascendet’ (‘there shall come forth a rod from the root of Jesse, and a flower shall rise up out of his root’, Isaiah XI,1), has been interpreted as foretelling the birth of Christ, the flower (flos) on the stem that is the Virgin Mary (virga) of the line (or root, radix) of Jesse. The Virgin Mary was not of course of the line of Jesse, but her place in the diagrammatic composition was secured by the verbal pun of virga (stem) and her identity as virgo. Smith cites examples of this visual allegory throughout the Middle Ages in different media, including sculpture, ecclesiastical robes, painted ceilings, roof bosses, furniture, manuscript illumination, and liturgical drama. He examines in greater detail the group of eight fourteenth-century windows on the theme attributed to a single workshop by Christopher Woodforde of which the east window forms part: Bristol, Lowick (Northants.), Ludlow (Shropshire), Madley (Herefordshire), Mancetter and Merevale (Warwickshire), Shrewsbury, and Tewkesbury. While he praises the work of the Victorian and post-War studios for restoring clarity to the ravaged glass at Bristol, he laments the absence of a sufficiently similar medieval example with which to compare and reconstruct it.

Sarah Brown has not only vindicated the work of the nineteenth-century restorers, but demonstrated the place of Bristol as a key monument in the development of Gothic revival stained glass. Pevsner’s observation that ‘far too much was done by the restorer of 1847’, in his volume on north Somerset and Bristol, had implied this campaign had been woefully destructive. Brown used antiquarian sources to show the degree of damage already sustained prior to this work in order to redress the popular misconception. In her article examining the role of Charles Winston in the mid-nineteenth-century restoration, she narrates how his consultation on the project provided him with important access to medieval material that informed his experimental attempts to revive the manufacture of pot-metal glass. The glass at Bristol thus forms an important chapter in the revival of stained glass in the nineteenth century.

While a detailed assessment of the medieval glass at Bristol has not yet appeared, further insights can be drawn from other monuments. The fourteenth-century glass in the Lady Chapel was designed for and installed in window openings of the Decorated style. The aesthetic value of the, often elaborate, tracery forms that characterize this style is easy to appreciate. While these forms can be admired for their own sake, the variety that exists between and even within major monuments suggests that a process of selection or a degree of customization that took the pictorial content of the windows into account must have been operating. And, while the fragmentation of the window field into discrete tracery lights presented certain challenges to pictorial coherence, Decorated style tracery was not unresponsive to the narrative needs of stained glass. Richard Marks has pointed to the bizarre conglomerated form of the tracery in the east window of the south aisle at Wing (Bucks.) accommodating a scene of the Coronation of the Virgin, and to the fantastic interplay between the carved vines on the tracery and the now fragmentary Jesse Tree in the glass at Dorchester Abbey (Fig. 2).

Tim Ayers has compared the abbreviation of figures in the Decorated style tracery at Wells Cathedral with artistic conventions in other media. Thus the series of heads grouped into categories such as the Apostles and the tribes of Israel have points of contact with Roman inspired medallions of portrait busts in manuscript illumination, embroidery, and so on. Similarities between the heads at Wells (Fig. 3) and Bristol have long been observed. However, besides the difference in scale they also differ in the use of text. At Wells, some individual heads retain inscribed names in their lower borders (Figs 3, 4). At Bristol however there is no indication that the figures were ever specifically identified. Yet even if we did not have antiquarian sources confirming the subject of the east window in the Lady Chapel at Bristol, we would still be able to recognise it as the Tree of Jesse from the surviving heads in the tracery. In the reduced picture field of Decorated style tracery lights at Bristol, the small detail of head covering is highly significant.

In medieval art, head cloths were usually worn by women to the exclusion of men, as is apparent from the scenes of miracles in the Trinity Chapel at Canterbury Cathedral (Fig. 5). Throughout the Middle Ages, secular women covered their hair out of modesty, and only young girls or loose women such as Mary Magdalen, who is distinguished from the Virgin Mary in the Lamentation at East Harling (Norfolk) by this feature, wore their hair uncovered (Fig. 6). Veils also formed an intrinsic part of the monastic dress for nuns. Such textile head-coverings were therefore a principal indicator of female gender in secular as well as religious communities. It can sometimes be difficult to distinguish between such head coverings and hooded cloaks and the cowled habits of monks. However, these are continuous garments with the hood either integral to the habit or defined by a neck fastening on the cloak. The way the fabric wraps under the chin of the figure at Bristol counts against it being either a cloak hood or a cowled habit: rather, it appears to be a large, independent, rectangular piece of fabric that can be wrapped around the body as an outer garment, and occasionally covering the head. This also differs from the veils of nuns and other women, which cover the head only.

This costume can be traced in manuscript illumination of the thirteenth century. The Psalter of Blanche of Castile, now in the Library of the Arsenal in Paris, contains an early example of this male form of head covering (Paris, Bibliothèque de l’Arsenal, MS 1186, fol. 14r). The recto of folio 14 displays a scene of the worshipping of the golden calf in which the lead figure at the altar has a similar textile draped over his head. The same garment is also worn by followers of the golden calf in the Bodleian copy of the Bible Moralisée (Oxford, Bodleian Library, MS 270b, fol. 57v) in a scene where Moses returns from the mountain. In these examples, the costume is associated with the heretical practices of idolatry. It is in the English manuscript known as the de Brailes Hours in the British Library that the underlying reference point for this detail of dress is particularly apparent (British Library, Additional MS 49999). On the verso of folio 43, a scene depicts the anti-Semitic legend of the wandering Jew. Here, the Jewish man who was supposed to have rebuked Christ for resting on his doorstep on the way to Calvary is shown with a large swathe of cloth prominently draped over his head. In her book (see Further Reading) Ruth Mellinkoff identified this form of head covering as a consistent and distinctive marker of Jewish identity in medieval art that perhaps refers to actual Jewish prayer shawls known as talliths. She considered costume unambiguous in meaning, as opposed to more multivalent headwear such as Phrygian caps (associated with exotic foreigners) or tight caps with chin straps (associated with peasants, labourers, torturers, executioners, aristocrats and lawyers).

The difference between the cloth-covered head at Bristol and these manuscript illuminations is that the use of the textile is not overtly anti-Semitic or particularly deprecating. It is perhaps not insignificant that the Jewish population in England had been expelled during the intervening years. Fourteenth-century art certainly appropriates this Jewish form of dress for the representation of men from the Old Testament. Previously Old Testament figures who also had a sacerdotal role had been dressed in attire that approximated the newly emerging regalia of medieval bishops. Thus it was not unusual to see representations of Samuel wearing a bishop’s mitre as he anoints David in the twelfth and thirteenth centuries. The relationship between the bishop’s mitre and Old Testament iconography (as well as its intersection with anti-Semitism) was brilliantly untangled by Ruth Mellinkoff in her book The Horned Moses in Medieval Art and Thought of 1970. Regardless of the forces at play in this transition, figures from the Old Testament are increasingly represented wearing a garment covering the head in fourteenth-century art, which perhaps reflects an increasingly historical approach to the Bible.

At Wells, this costume facilitates the distinction between historical and biblical figures, making the group of the tribes of Israel in nII in the Lady Chapel (Fig. 7) instantly distinguishable from the group of bishop saints in the retrochoir (Fig. 8). At Bristol, in conjunction with crowned figures (Figs 9, 10), it immediately identifies the subject as the Tree of Jesse, containing royal ancestors of Christ and Old Testament prophets who foretold the arrival of Christ. While the two heads from Wells and Bristol (main picture, Fig. 3) are strikingly similar, their similitude derives from a common approach to the depiction of male figures from the Old Testament in the fourteenth century, rather than a common subject.