Please note that the promised review of Four Modes of Seeing: Essays in Honour of Madeline Harrison Caviness will now appear in a later issue.

This is a beautifully produced and lavishly illustrated book. Published as one of a series of volumes describing the historical monuments in the state of Brandenburg, and edited by Marina Flügge and Florentine Dietrich with assistance from Sandra Meinung. It commemorates one of the most exciting glass stories of modern times; the return from Russia to Germany of a unique glazing scheme made around 1360–70 for the Marienkirche in Frankfurt-und-der-Oder and the consequent rebuilding of the shell-battered ruin of a great gothic church in order to rehouse them.

Previous issues of Vidimus have followed this story as it unfolded: the return of 111 of the original 117 panels from Russia in 2002; the subsequent discovery of six panels, thought to be lost, in a monastic store room belonging to Moscow’s Pushkin Museum; the Russian Duma’s approval for the return of the panels to Germany; the multi-disciplinary conference convened to explore the unique iconography of the third of the three 20m tall apsidal lancet windows (sI) showing episodes from the life of the Antichrist; and finally last year’s moving ceremony in the church when the remaining panels were formally handed over.

The book is divided into two parts, sandwiched between three sets of superb full-page photographs of the panels forming each window.

The first set of photographs reproduces the central east window (I), known as the Bible window or Bibelfenster. Apart from three panels of ornamental glass reused from elsewhere in the church, this window is largely intact and includes 33 historiated (picture) panels depicting incidents in Christ’s life (ante-types) paired with their typological parallel from the Hebrew Old Testament (types). Significantly the lowest – and most visible – row of panels show the birth of Christ (I1b) flanked by Moses and the Burning Bush (I1a) and the flowering of Aaron’s rod (I1c). As befitting the dedication of the church, the uppermost light shows the Coronation of the Virgin.

The second set of photographs reproduces the first, or northernmost, of the three windows, The Genesisfenster or Genesis window (nII). This shows God making the world, the Creation of Adam and Eve, their Temptation and Fall, scenes from the story of Cain and Abel, and the Great Flood. The window also depicts three scenes from the Fall of the Rebel Angels. [Fig. 2]

The six panels returned to Germany from Russia in November 2008 came from this window and will be reinstated in the church in 2009. Unfortunately even with the installation of these panels, the window will still be incomplete. At least eight panels were already missing from this window when the church was restored by the German architect Karl Friedrich Schinkel (1781–1841) in 1830.

The missing panels have been filled with fragments of other glazing schemes of the same date from elsewhere in the church. These include decorative panels, and the remains of two pictorial scenes, a crucifixion and the upper part of a female figure representing Ecclesia. Sadly, it has not been possible to identify the original location of this glass within the church.

Fig. 3. The Circumcision of the Antichrist (sII).

The final set of photographs features the Endzeitfenster or ‘End of Time’ window (sII), often called the Antichristfenster because of its unique iconography which begins with a demon announcing the birth of the Antichrist and continues with his birth and circumcision, as if mirroring the Infancy of Christ story. Thereafter scenes show the Antichrist committing sins and crimes and people believing in his false testimony and gifts until he is finally slain by an angel (sII, 11b) and mankind is judged by Christ, the Weltenrichter (sII, 13b). [Fig. 3]

While obviously intended as an apocalyptic Last Judgement moral, the unique iconography portrayed in this window continues to puzzle historians. Perhaps the theme had a powerful effect on one or more of the wealthy merchants in this important Hanseatic trading city who are thought to have commissioned the scheme. Although there is no evidence that donor imagery was ever part of the design, the fact that there is a row of blocked up windows at the foot of the scheme inevitably fuels speculation. Donor imagery, such as heraldic devices, inscriptions and figures, often appeared in the lowest tier of windows.

Apart from the stunning photographs, the book also includes a number of important chapters, beginning with a history of the church by Sandra Meinung, from its foundation in 1253, and the building campaigns of the mid-14th century and later, to its wartime destruction and recent reconstruction.

A wide-ranging essay by Marina Flügge explores similarities between the artistry of the glass painters and glazing schemes elsewhere, as well as contemporary imagery in manuscripts, panel paintings and metalwork.

No exact stylistic parallel with the Frankfurt glazing has been found. The author illustrates a 14th-century typological glazing scheme in the St Marien church, Krakau (Krakow) in Poland, whereas an earlier publication by Dr Frank Martin of the CVMA (Potsdam) detected similarities with the glass in St Blasius’ church in Mühlhausen/Thüringen, [see: Der Antichrist: Die Glasmalereien der Marienkirche in Frankfurt (Oder), 2008]. Overall, the style of the Frankfurt glass is dramatic and expensive, yet at the same time provincial and less sophisticated than can be found elsewhere in Germany in the mid-14th century. One possibility is that the windows were the product of a Northern German workshop, possibly based somewhere like Lüneburg, Lubeck, or Magdeburg which served wealthy Hanseatic League donors/cities and drew artistic ideas from central Europe. An important discovery by Dr Eva Fitz of the CVMA (Potsdam) and illustrated in the book, sheds further light on the output of the workshop responsible for the glass painting, as it also provided the design of an inscribed scene of the Annunciation made for a (now lost) bell cast for the church. Carved wooden panels depicting the Antichrist from Magdeburg and Antichrist imagery in the Welislaw-Bible made in Prague c. 1340 are cited by Marina Flügge as indicative of the intellectual and artistic milieu which probably influenced this workshop and its customers. 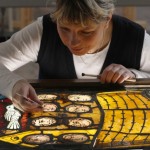 The book also includes short chapters cataloguing the conservation of the windows by members of the conservation team: Gerlinde Möhlre, Sandra Meinung, Nicole Sterzing and Sandra Williger. Chapters on the modern glass in the nave and the restoration of the painted vaults in the apse complete a comprehensive survey of the glass and its historic setting.

This is a magnificent book – and in more than one sense. Until the collapse of Communism, Frankfurt (Oder) was part of East Germany. Badly damaged by the Russian advance in the closing stages of the Second World War, the city was subsequently described as drab and grey. The partial reconstruction of the Marienkirche as a social/cultural centre and the restoration of the windows was not merely a restoration project by the newly reunified German state; it was, in Sandra Meinung’s words, an attempt ‘to encourage a sense of pride and identity’ in Frankfurt, a way of healing old wounds and building a better future for generations of East Germans impoverished by the post-war settlement – in short, noble aims for a distinctly noble book.

To read more about the glass, the following three essays by members of the CVMA (Potsdam) team are invaluable:

Before the first batch of panels were returned to Germany in 2002, the Hermitage Museum in St Petersburg staged an exhibition of the windows. Selected images from this show can be seen on the museum website.

‘Painted on Glass and Light’: The Klaus Tiedemann Collection of Netherlandish Roundrels and Other Early Painted Glass

Roundels and other single panels are among the most keenly-collected examples of 16th- and 17th-century painted glass. Yet despite their popularity and often intriguing subject matter, there has never been a book about them for the general reader….until now.

Dr Klaus Tiedemann started buying early glass in 1983 before purchasing his first roundel in 1988 from the noted Swiss dealer, the late Sibyll Kummer-Rothenhäusler. Today he owns possibly the largest, and certainly the finest, collection of roundels in private hands anywhere in the world. This book glows with enthusiasm and the kind of hands-on knowledge that only examining, touching and seeing thousands of roundels can produce.

Published to coincide with an exhibition of the author’s collection at the Knauf-Museum in Iphofen, Germany, this book begins with a brisk chapter explaining the classification of stained-glass windows, the differences between Swiss, German and Flemish panels, descriptions of how the panels were fitted, helpful insights into dating, the subjects depicted, the artists who made them, later fakes and forgeries, and useful information about the techniques – and pitfalls – of restoration.

Thereafter the book gallops into the catalogue itself: Gothic panels from Germany; colourful 17th-century ‘welcome panels’ from Switzerland; and over seventy Flemish roundels are among the entries discussed and consistently well-illustrated. Although brief, many of these descriptions include helpful comparisons with contemporary designs/cartoons by Dutch artists and engravers such as Dirk Vellert (c.1480–1547), Martin van Heemskerck (1498–1574), Philip Galle (1537–1612), and the Southern Netherlandish workshop known as the Psuedo-Ortkens group (1520–1540). Interesting asides about the subject scenes depicted, such as their meaning, rarity, and where similar examples can be seen in public collections worldwide, add a further layer of value to a well-designed book with plenty of appeal to anyone interested in the subject.

The final entries revolve around what the author calls ‘Baroque panels’; single panels from 1600 onwards where techniques changed and national differences became more distinct. The former includes the widespread use of coloured enamel paints. The latter is highlighted by a delightful series of Fensterbierscheiben, small signed and dated panels given as presents to neighbours in northern German coastal regions in the 17th and 18th centuries and often described as ‘rural panels’ by collectors and dealers as a result of the ‘country life’ scenes depicted. Interestingly this tradition also extended to Denmark but never to Switzerland. France and England. Sadly, it seems to have petered out entirely by the end of the 18th century.

I liked this book. The bi-lingual formula makes it accessible to a wide audience. Hopefully new advances in digital photography and printing will see more publications in a similar vein.

To see images from Dr Tiedemann’s collection currently on display at the Knauf-Museum in Iphofen, Germany, see Vidimus 28.

This is a very rare subject scene – I’ve not seen one before. It almost certainly shows the mother of Zebedee’s children with her sons before Christ as told in Matthew 20: 20–29.

According to the Gospel, Jesus had told his disciples that they were going to Jerusalem where, ‘the son of man shall be betrayed to the chief priests and the scribes, and they shall condemn him to death’. When the mother of two of his disciples, James and John, approached him, she asked if her sons could sit on his right and left in his kingdom, causing Jesus to reply: ‘to sit on my right or left hand, is not mine to give to you, but to them for whom it is prepared by my Father’.

It has been interpreted as meaning that disciples now belong to a new family and that rankings in heaven were not conditional upon traditional genealogy.

Vidimus is extremely grateful to Dr Paul Taylor of the Warburg Institute for his generous help with his item.