Strawberry Hill Forever: The Restoration of a ‘Rampant Lion’ 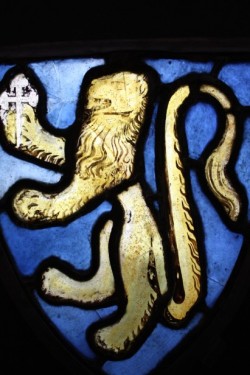 This month’s panel is probably the oldest piece of stained glass that was bought by the eighteenth-century collector Horace Walpole and installed in his ‘ little Gothic castle’ at Strawberry Hill in south west London sometime between 1747 and his death in 1797. It has been chosen to illustrate some of the problems facing conservators as part of a multi-million pound initiative to restore this famous house and its stunning collection of stained glass) before it is opened to the public next year. It also highlights important exhibitions about Horace Walpole and his collections currently showing at the Yale Center for British Art in the USA and forthcoming from 6 March 2010 at the Victoria & Albert Museum (London).

Horace Walpole (1717–1797), 4th Earl of Orford, was the youngest son of Britain’s first modern Prime Minister, Sir Robert Walpole. Although he followed in his father’s footsteps into politics and served as a Member of Parliament 1741–1768, he is best remembered as a ‘man of letters’; the author of the Gothic novel The Castle of Ortranto, and perhaps most lastingly, as the creator of the Gothic revival architectural style known as ‘Strawberry Hill Gothic’.

Fig. 1. Horace Walpole. Engraving by James McArdell after the portrait by Joshua Reynolds (1757)

Walpole bought the four-acre estate on this site between Twickenham and Richmond in 1747. Thereafter he radically enlarged both the existing house and grounds, remodelling the former into a gothic fantasy castle. Part of the interior decoration saw the purchase and installation of hundreds of panels of displaced stained glass, much of it from the Low Countries. For the first phase of work (1750–1754) Walpole used Mr Palmer, of St Martin’s Lane, to set the panels in plain deeply coloured glass, which showed off the pale roundels to great effect. Later (1759–1761) he called upon William Price the Younger (1703 or 1707–1756), the highly accomplished London glass painter, who provided richly coloured settings of great sophistication. Following Price’s retirement in 1761, Walpole used the York glazier William Peckitt (1731–1795) to glaze the remainder of the house.

Walpole’s taste was eclectic; he did not mind whether scenes were religious, mythological, rural or just pretty. The glass was arranged for its decorative and atmospheric effect, rather than for its iconographical or religious meaning. It was collected and displayed as part of a cabinet of curiosities

After his death in 1797 most of Walpole’s furniture and decorative items, including considerable amounts of his stained glass were eventually sold. Even so, more than 200 pieces remained in the house. In 1922/23 the house and grounds were acquired by St Mary’s College, a Catholic teacher training centre (now part of the University of Surrey). After World War II the glass was reset and restored by the architect Sir Alfred Richardson (1880–1964) aided by Joan Howson (1885–1964), whose conservation approach was perhaps, by modern standards, interventionist. The house and gardens are now being restored by the Strawberry Hill Trust (formed in 2002) which has acquired a 120 year lease of the site from the College. Contributions to the £8.9 million cost of the project have been made by the College itself, the Heritage Lottery Fund, English Heritage, the World Monuments Fund and other bodies. [Fig 1]

Our panel is of early fifteenth-century date, possibly English. Shaped as an armorial ‘heater’ shield, it measures 6 inches or 15 cm at its widest and 6½ inches, 16.5 cm, lengthwise top to tip. It was installed as a tracery light in a window in the Circular Stairs Tower above the Beauclerc Closet.

Fig. 3. The panel with a Sellotape tail. © Paul San Casciani.

Nothing is known about its earlier provenance. When it was first seen by the current conservation team its appearance was described by consultant, Paul San Casciani FBSMGP, as ‘unprecedented’ in his experience

Missing glass had been patched with Sellotape to keep out the weather while the entire exterior surface of the panel had been covered in up to six coats of proprietary white emulsion masonry paint. To all intents and purposes it had been wholly painted over. [Figs. 2 and 3]

When the panel arrived at Chapel Studios, Head of Conservation Rachel Helleur’s first job was to remove the paint, initially by softening the crusted layers in the solvent, Acetone, diluted with deionised water. With the paint removed, the panel showed a lion rampant painted with a brown pigment and yellow stain holding a cross botonny, fitchy, against a blue (azure) background.

In Heraldry, a cross ‘botonny’ is a cross with its arms terminating in three rounded lobes, forming a sort of trefoil. The cross bottony can be used as a symbol of the Christian Trinity, God the Father, the Son and Holy Spirit.

Fitch (or ‘fitchy’), means terminating in a point and normally refers to a cross in heraldry where the lower part is pointed like a sword blade. [Figs. 4 and 5 ]

Further investigation showed that parts of the lion’s tail, neck and mane were missing. Small breaks were also noted in the figure and in the blue glass surround. Apart from these defects, the figure had retained most of its original paint and possibly its original leads.

Rachel Helleur cut and painted new glass inserts sourced from a collection of old stock glass at chapel studio that matched the tint and texture of the original lion figure. Inserts were signed and documented. Rachel also carefully edge-bonded the small breaks. Having repaired the panel, the next problem facing the conservation team was how to treat this important glass in the restored scheme. [Fig. 6]

The installation of a complete internally ventilated protective glazing system had been ruled out by the architects at an early stage of the Strawberry Hill restoration project. However, they had requested an ‘isolated’ and ‘easily removable’ ventilated system for panels lent to the Trust by bodies such as the Victoria & Albert Museum. As the conservation of the roundels progressed it became clear that the delicate and vulnerable condition of many others, including our Panel of the Month, meant that more panels than originally estimated would have to be fitted within the ‘isolated mini isothermal glazing system’ designed to protect the internal painted surfaces of the roundels from condensation during the colder periods of the year.

First, plain float glass cut to the same shape as the protected panels was inserted into the windows. Small square blocks of lead measuring about 5mm high and 7mm wide were then soldered onto the lower half of the calmes which held the plain glass inserts. Each block was roughly 2 cms apart. A single block was also fixed at the highest point of the upper lead calmes.

Next ‘U’ section reinforced calmes with a steel heart running through them were shaped to replicate the form of the lower half of the panel and soldered onto the lead blocks. The lower half of the conserved panel was then slid into this lower ‘cradle’ and the upper half held in position by a light solder to the single top block. If the glass subsequently had to be removed only this solder would need to be broken. Thereafter the panel could be lifted vertically from its ‘cradle’. The work could be done in situ without having to remove the whole window. [Figs. 7 and 8]

Chapel Studios are currently restoring around 229 panels of which 40 are being fitted with this unique ventilated system.

Having begun the programme in the autumn of 2008 it is hoped that all of the panels will be ready for reinstallation early in the New Year.

Vidimus is extremely grateful to Paul and Paula San Casciani and the Chapel Studio team for their help with this article. Thanks are also extended to The Strawberry Hill Trust for permission to reproduce the images in this article.

The Friends of Strawberry Hill

For more information about the restoration project see the splendid Friends of Strawberry Hill website.

A major exhibition devoted to Strawberry Hill: Horace Walpole’s Strawberry Hill is currently showing at the Yale Center for British Art, New Haven, Connecticut, until 3 January 2010. The exhibition was organised by the Center, the Lewis Walpole library and the Victoria & Albert Museum. For details of opening hours and more information about the exhibition, see the Yale Center for British Art website.

A scholarly catalogue of 356 pp and 300 illustrations accompanies the exhibition. Edited by Michael Snodin, Senior Research Fellow in the Research Department, Victoria & Albert Museum. It costs £40.