What a start to the New Year!

Just as it was due to begin came news that the famous early 15th-century glass from York Minster’s splendid east window had survived a possibly disastrous fire which broke out directly above where it was being stored; don’t miss our exclusive report in this month’s Features section. Days later came reports of another horrendous fire, this time at the parish church of St Mary at Sheering in Essex; once again, however, rare 14th-century glass depicting the Coronation of the Virgin was miraculously undamaged. [Fig.1]

Relief was followed by a rush of positive news. First was the confirmation of Sarah Robertson as the new curator designate of the Stained Glass Museum in Ely Cathedral. We wish her well. Nor did it stop there. In 2008 we reported two terrible incidents: the vandalism of early glass at Conisborough in Yorkshire and the shattering of an important 13th-century panel in Lincoln Cathedral. This month we also include uplifting reports concerning the skilful repair of these important treasures.

Which leads me to a further thought. Stained glass needs skilled practitioners. Nobody better understands this than the Worshipful Company of Glaziers and Glass Painters, the descendents of one of London’s oldest medieval guilds. The Company does an immense amount to foster craft training, as our news report about their 2010–11 prizes and awards makes clear. As they also sponsor Vidimus, their contribution to stained glass studies also deserves special mention, 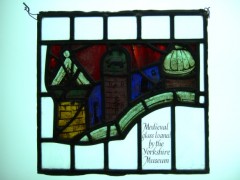