An Early Medieval Canopy: Museum Collections and the Dispersal of Medieval Stained Glass 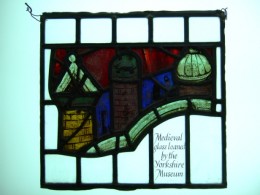 An important collection of stained glass at Yorkshire Museum will form part of the newly displayed medieval galleries in York, due to reopen in August 2010. The recent cataloguing of this collection has identified many of the panels and led to several interesting finds, one of which is recounted here. These reveal the huge potential for future research into the collecting of stained glass from all over Europe during the 18th and 19th centuries.

Most of the panels and fragments of stained and painted glass at Yorkshire Museum were purchased in 1887 from local antiquarian Mr. James Fowler (1839–1890) by the Yorkshire Philosophical Society, the founding group of Yorkshire Museum. The collection acquired includes pieces dating from the 12th to the 19th century, much of which had previously either been in the possession of the antiquarian collector Dr John Merewether, Dean of Hereford 1832–1850, or the stained glass artist Thomas Ward (1808–1870) of the Victorian firm Ward & Nixon, later Ward & Hughes.

Description of the Panel

In the collection is a large portion of an early medieval architectural canopy, measuring 353mm high by 375mm wide. Charles Winston believed this glass to be from the 13th century, although Philip Nelson, Herbert Read and W. Wells have since thought it to be 12th century in date. The panel comprises thirty-two pieces of medieval glass, set against a modern plain rectangular quarried background. The medieval painted pieces of coloured and white glass form an architectural scene incorporating two round turrets of murrey glass, one with a green dome and the other a white dome. To the left is a yellow tower with a white pointed arch at its summit. Between these three towers are other buildings represented by pieces of blue glass with painted doors and round windows. The whole panel is set against a rich ruby ground and the architecture is more classical than gothic in style.

Origin of the Panel

The canopy originally framed a large bust thought to represent a beardless saint or Christ with folded arms and a scarlet halo, as illustrated in Winston’s An Inquiry into the Difference of Style Observable in Ancient Glass Paintings, especially in England with Hints on Glass Painting by an Amateur(Oxford, 1847), Vol. II, Pl. 3, 4 and 35. [Fig. 1] The head can now be seen in the church of St Mary and St Nicholas, Wilton, Wiltshire, where it was installed during the first half of the 19th century. This explains the shape of the canopy panel and accounts for the steep incline in the row of buildings and the curved white medallion border, which once surrounded the head. The large scale of the panels suggests they were originally part of a clerestory window.

A contemporary German panel (dated c.1175 by Louis Grodecki) depicting the Kiss of Judas originally from the Romanesque Benedictine Abbey of Maria-Laach and now in the Wiesbaden Museum (Hesse), includes an architectural canopy of similar composition. [Fig. 2] The panel, part of a narrative cycle depicting the Passion of Christ, was cut down to fit a gothic window. A row of walls and round turrets lie above the scene and this architectural canopy-work is precursive of that found in panels of the early 13th century. Similar French panels from this later date remain in situ in the choir clerestory of Chartres Cathedral, such as the figure of the prophet Isaiah framed by a cusped border and surmounted by a symmetrical architectural canopy. [Fig. 3] The style of the Yorkshire Museum glass is French, and Louis Grodecki has suggested it originated from the Ile de France or Champagne region. Certainly the figure has some affinities with later clerestory windows at Troyes Cathedral.

The Church of St Mary and St Nicholas, Wilton

The medieval glass may have been imported by John Christopher Hampp in 1802 or 1803 and was later bought by Catherine Woronzow, the Dowager Countess of Pembroke, and her son, the Hon. Sidney Herbert (Secretary of War, and Later Lord Herbert of Lea), to use in their new church at Wilton. This large Wiltshire church is of international significance. It was built in an Italianate Romanesque style with Bath stone between 1841 and 1845 at an astonishing cost of £20,000 by architects T. H. Wyatt and D. Brandon. With an aisled and clerestoried nave, an aisled chancel, eastern apse and 108 foot high campanile connected to the church by a short cloister, the grand building is an imitation of a Lombardic basilica. [Figs. 4 and 5] Inside, the church was almost entirely furnished with antiquarian objects purchased by Herbert, much of which was imported from Europe and incorporated into the church.

Medieval twisted columns with Cosmati work were bought by Sidney Herbert at an auction of Horace Walpole’s items from Strawberry Hill in 1842. They had been given to Walpole by Sir William Hamilton who purchased them in 1768. A 19th-century Cosmatesque pavement was fitted to complement these columns (See Fawcett, p.17). Lord Lea also purchased a marble shrine of mosaic, in three compartments, supported by twisted columns from Walpole’s collection. The so-called Shrine of Capoccio originated from the church of S Maria Maggiore at Rome where it had been erected in 1256 (See Gentleman’s Magazine, Dec., 1842, p. 599). The marble columns at the southern end of the side aisles came from a 2nd century BC Temple of Venus at Porto Venere. The medieval French glass was installed in the eastern apse during 1841–43 by Messrs Ward and Nixon (not Clayton & Bell as erroneously stated in some sources), along with a number of panels from the Abbey Church of St-Denis. [See Fig. 5]

Lord Lea sought to harmonise modern furnishings with these ancient ones he had collected, and much of the medieval European glass in the apse was supplemented with modern pieces, to fill the window openings. Such eclecticism was criticised by the Ecclesiologist which wrote in 1846 ‘The whole effect is very incongruous, and though Messrs. Ward and Nixon have shown great ingenuity in the manner in which they have combined it, we must yet pronounce it a failure’. Other parts of the church were furnished with panels of stained glass dating from the 14th to 16th centuries. German, Flemish and English glass from this period decorated the north and south aisles. 16th and 17th century Flemish roundels were also placed in the vestry windows. Some glass painted by Arnold of Nijmegen from a Convent in Malines filled the nave; this belongs to a group at St George’s, Hanover, originally from Antwerp. Additionally some mid-16th century English donor figures, commemorating the marriage of Mary Tudor and Philip II of Spain, were removed from the old chapel at Wilton House and fitted into the new church.

Problems with draughts, leaks and damp in the church led to several later repairs. The patrons of St Mary and St Nicholas expressed concern for the upkeep of the church’s fabric. Both the Countess of Pembroke’s will of 1856 and Lord Herbert of Lea’s will dated 1858, bequeathed £1,000 each to the church; the first establishing a trust to be invested for the maintenance of the painted glass, mosaic and other ornamental work, and the second for the maintenance of the chancel.

Although the large head remains in Wilton Church today, in the central eastern window (Window I) of the apse, contained in a mandorla and against a modern diapered blue ground, [Fig. 6] the canopy is now divided between two museum collections. Winston saw the panel in one piece in Sidney Herbert’s private collection before the head was separated from the canopy and installed in the new church at Wilton. His illustration is therefore valuable in showing us its state before modern intervention and incorporation into a new scheme. Several mending leads have been fitted to the canopy since it was illustrated by Winston. [Compare main image and Fig. 1] The canopy panels were never installed at Wilton and did not feature in the scheme of stained glass arranged there. The part in Yorkshire Museum’s possession was retained by glazier Thomas Ward, whose private collection later came into the hands of James Fowler. The panel featured in Fowler’s paper ‘On the Process of Decay in Glass’, published in Archaeologiain 1880. It was then purchased for Yorkshire Museum along with the rest of Fowler’s collection in 1887.

The other part of the canopy has since been discovered by Dr Tim Ayers in the Burrell Collection. [Fig. 7] The arrangement of the architectural montage in this panel is the precise opposite as that in Yorkshire Museum’s panel, the canopy being symmetrical. It is said to have been sold to the collector George Grosvenor Thomas (1856–1923) by the grandson of Alfred Bell, of Clayton & Bell. This stained glass firm were engaged in repairs to Wilton’s fabric at a later point when Alfred Bell probably obtained the canopy piece. When Burrell acquired the panel he displayed it in Hutton Castle, his home near Berwick-on-Tweed. It later officially became part of Glasgow’s Burrell Collection in 1956.

Thus many questions arise surrounding the role of the 19th-century glazier in the dispersion of medieval stained glass. It seems that glaziers actively supported the private collecting of antiquities, participating in the removal and separation of stained glass panels from their architectural contexts and their dispersal into the hands of eager collectors.

Our panel demonstrates the extent to which parts of medieval stained glass windows could be spread amongst collectors and often later deposited in Museums. Collections of stained and painted glass in museums of national importance like the Burrell Collection and Yorkshire Museum are worthy of study and thorough documentation. The recent publication of Dr Penny Hebgin-Barnes’ CVMA volume for Lancashire has made the entire stained glass contents of the Walker Art Gallery (belonging to Liverpool Museums) accessible to the public and scholars alike. Such publications are to be welcomed and open up multiple avenues for research. For if we are undertaking an entire survey of the medieval stained glass in Great Britain, the depositories of glass in Museum and private collections are equally as important as those panels which remain in our churches and civil buildings.

The Yorkshire Museum’s ‘Letting in the Light’ project for the refurbishment and redisplay of the Museum galleries is supported by the DCMS/Wolfson Foundation, Renaissance in the Regions, the Monument Trust and the City of York Council. The Museum will reopen in 2010, and medieval stained glass will form part of the new display.

The Burrell Collection in Glasgow holds one of the largest international collections of stained glass in Europe. Over the next years Glasgow Museums are planning to produce a comprehensive updated catalogue of the collection. A first milestone of this project will be to carry out an inventory and to assess the condition of all the stained glass. The collection has been on continuous display for over 25 years and many of the panels will require conservation treatment before they can be redisplayed.