St Cuthbert and the Otters at York Minster 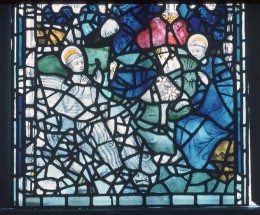 This month’s panel comes from the St Cuthbert window, in the south-east transept of the choir of York Minster. The St Cuthbert window was commissioned in the 1440s to commemorate Thomas Langley, Bishop of Durham from 1406 until his death in 1437. The window is likely to have been based on a 12th-century manuscript made in Durham and can be related to other 15th-century windows and panel paintings devoted to St Cuthbert. It provides a fascinating insight into the use of manuscripts as models for stained glass design.

Our panel is one of 105 panels depicting episodes in the life of St Cuthbert. Although distorted by losses and subsequent restoration, it shows two images of St Cuthbert. On the left he can be seen standing up to his neck in the sea, arms outstretched, looking toward heaven in prayer. Above the saint, another male figure stands before a church, peering down at him. On the right St Cuthbert is shown seated on a rock.

St Cuthbert, Bishop of Lindisfarne, was one of the most revered Anglo-Saxon saints. Buried in AD 687 in a stone coffin at Lindisfarne, his body was exhumed and moved to a number of locations in the north of England before being finally translated to the feretory in the apse of Durham Cathedral in 1104. His shrine immediately attracted pilgrims and his cult enjoyed revived popularity in the 15th century, when many images of the saint – including our panel – were made to adorn churches throughout northern England.

Two versions of Cuthbert’s life, one in verse, the other in prose, were written within a few decades of his death by the Venerable Bede (AD 673–735), a monk in the nearby Northumbrian monastery at Jarrow. Our panel is thought to represent Cuthbert’s visit to St Ebba’s monastery, as described in Chapter 10 of Bede’s prose Life of St Cuthbert.

While staying here, Cuthbert was in the habit of going out at nightfall and making his way down the steep path to the sea. Here he would stand up to his neck in the water and spend the night in prayer… On one occasion a monk from the monastery being curious, followed the saint as he went out to the sea-shore to perform his secret devotion. The monk watched him from the cliffs above and was amazed, after Cuthbert had returned to dry land, to observe two otters come out of the sea, warm the saint’s feet with their breath and dry them with their fur.

The panel therefore shows these two events: St Cuthbert at prayer in the sea and, afterwards, having his feet dried by otters. Although the otters are not clearly visible on the panel, they may be represented in the sea beneath his feet. The monk who witnessed the scenes is visible in the upper left part of the panel, standing before the church, which represents St Ebba’s monastery.

The combination of two scenes in one panel was a technique used elsewhere in the St Cuthbert window. In panel 16c, for example, St Cuthbert is shown both sowing seed and expelling birds from his crops. [Fig. 1]

Many of the panels, including our panel of the month, can be related to a late 12th-century manuscript produced in Durham containing 55 full-page miniatures of Bede’s prose Life of St Cuthbert. Folio miniature 24r, for example, bears a remarkable resemblance to our panel. [Fig. 2]

In 1938 the Durham university academic, Bertram Colgrave (1888–1968) suggested that the manuscript was the principal design source for the St Cuthbert window at York. He also demonstrated that it was used to inform the design of a similar window in the north aisle of the choir at Durham Cathedral, probably made in the 1420s, and a cycle of panel paintings on the reverse side of the choir stalls at Carlisle Cathedral (Cumbria), dated 1484–1507. [Figs. 3 and 4]

The manuscript, now in the British Library, was made in the Durham scriptorium so would have been accessible to the designers of the Durham window. Two windows on the south side of the Chapel of the Nine Altars at the eastern end of the cathedral also comprised – like that at York – ‘all the whole storye life and miracles of that holy man St Cuthbert’. Unfortunately the medieval glass at Durham no longer survives, but it is described in The Rites of Durham, a late 16th-century account, written by an unknown author, of the pre-Reformation cathedral. This includes an invaluable and detailed account of the building’s medieval monuments, architecture and glazing schemes. The close iconographic parallels between the description of the Durham glazing and that which still survives at York demonstrate the likeliness of this connection.

Fig. 4. The same scene as our Panel at Carlisle. © Anna Eavis.

The patronage links between 15th-century glass at Durham and York must account for the similarities between the windows. The donor of the York window, Bishop Langley, had served as Dean of York from 1401–5, and is depicted in a central position at the base of the window. In 1405, while Langley was Dean of York, the great east window of York Minster was commissioned by Walter Skirlaw, Bishop of Durham from 1388 until 1406. Skirlaw – along with Richard Scrope, then Archbishop of York – is thought to have paid for the construction of the south-east transept at York, probably the site of an altar dedicated to St Cuthbert and of Skirlaw’s chantry, in which Langley’s window was to be housed.

During his own episcopate, Langley appears to have commissioned a number of windows for the cathedral at Durham, in conjunction with the refurbishment of the chapel of the Nine Altars and the rebuilding of the cloisters. Described in the Rites, these included the cloister glazing, with images from the life and miracles of St Cuthbert, and a scheme in the east window which included a large image of Cuthbert holding the crowned head of another revered local saint, the Northumbrian Christian king, St Oswald. The latter imagery was also paralleled in the St Cuthbert window at York, in which Langley was commemorated alongside his predecessor Walter Skirlaw. [Fig. 5]

Given Skirlaw’s involvement in the construction of the York south-east transept, it is possible that plans for the glazing were discussed early in the 15th century. There is evidence that Scrope borrowed the Durham manuscript before his death in 1405; perhaps it was considered at this stage as a source for the York window. Another possibility is that the York glaziers based their design directly on the Durham window, or that the same glazing workshop was responsible for executing both. The stained glass historian, John Knowles (1881–1961), suggested that the description of various panels in the Rites was so similar to existing panels in the York glass that in addition to being executed by one artist, it is likely they also derived from the same cartoon. Certainly, there is some evidence that the Dean and Chapter of Durham obtained stained glass windows from York glass painters during the 15th century, as demonstrated by Jeremy Haselock and David O’Connor in their study of the Durham glazing.

At Carlisle, by contrast, although the similarity of composition points to the Durham manuscript as a source, many architectural and landscape details have been added to the painted scenes. David Park and Sharon Cather have plausibly suggested that the panel paintings were based on a book of sketches, themselves derived from the Durham manuscript.

The cult of St Cuthbert enjoyed a resurgence in the 15th century, particularly in the north of England. Many narrative cycles of his life were created at this time, including wall paintings, manuscript illuminations and stained glass windows. At Durham Cathedral, which was dedicated to St Cuthbert and housed his shrine, more than eighteen windows contained images of the saint. Malcolm Baker, now professor of art history at the University of California Riverside, has suggested that the revival of Cuthbert iconography was initiated in the fifteenth century by Bishop Langley or John Wessington, Prior of Durham from 1416 until 1446. In fact, the increased popularity of the cult appears to predate this. Reginald of Durham, a monk at the cathedral priory during the 12th century, recorded an increasing number of miracles from the 1170s onwards, probably in response to the competition posed by Thomas Becket’s cult at Canterbury Cathedral following the Archbishop’s murder. In 1372 a new shrine of alabaster and marble was provided for Cuthbert by the powerful Northern aristocrat, Lord John Neville, at a time when the number of pilgrims was growing and associated income increasing. It is possible that greater prominence was given to the shrine in order to provide a spectacle rivalling that of Becket’s shrine at Canterbury.

Our panel offers a fascinating insight into the way in which patronage links encouraged the circulation of design models for iconographic schemes. These models allowed glass painters to transform detailed narrative accounts into legible compositions that could easily be interpreted by audiences of such large-scale windows. At York and Durham cathedrals, the windows assumed the function of a giant advertisement for the local saint, reminding pilgrims and celebrants of his spiritual importance. Cuthbert’s cult was strengthened and reaffirmed by the numerous connections illustrated in the decorative schemes of the two most important cathedrals in the region.

I am extremely grateful to Anna Eavis for her help with this article.

For the Rites of Durham see the Internet Archive.

For the Durham Life of St Cuthbert manuscript see the British Library website.