‘The Art of Buildings’: The St William Window, York Minster 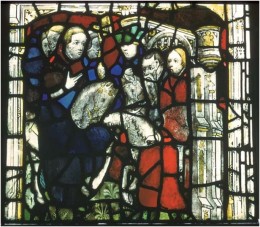 St William met by civic dignitaries before Micklegate Bar, panel 9b. © Dean and Chapter of York.

St William met by civic dignitaries before Micklegate Bar, panel 9b. © Dean and Chapter of York.

This month’s panel comes from the St William window, York Minster. While the design, authorship and patronage of this 15th-century masterpiece often receives the most attention, the images of identifiable buildings of the city of York depicted throughout the window also illustrate its importance as a truly magnificent display of civic pride and unity. Our panel, 9b, which shows Micklegate Bar – a highly significant York building – is key to an understanding of the window’s meaning.

Description of the Panel

The panel is a perfect example of an iconic image of the city of York. The scene is thought to depict St William, who sits astride a horse, alongside the Lord Mayor and dignitaries at Micklegate Bar, the official entrance to the City of York. This identifiable structure is represented as a round archway with a raised portcullis, buttressed walls and bartizans.

Born between 1090 and 1100, William was elected archbishop of York in 1141, but owing to bitter disputes with rival church leaders never received his pallium of office and was formally deposed by Pope Eugenius III in 1147. After the deaths of his enemies in quick succession in 1153 he returned to Rome seeking his reinstatement as archbishop. Successful in his quest, a year later William entered York in triumph.

What is most significant about this panel is the detailed painting style and familiar characteristics attributed to John Thornton of Coventry’s workshop. Expression and animation are key features of this style. The eyes have heavy lids and a dense iris, previously termed by the stained glass historian, John Alder Knowles (1881–1961) as a ‘comma on its side’. The mouth has a well-defined top lip and a shadow underneath the bottom lip. Noses are elongated, and some feature the bulbous tip trademarked to Thornton. Many glazing techniques can also be identified, including stippling and smear shading, in addition to a considerable amount of back painting. Although blue and red dominate the colour palette, a large amount of white glass is used with frequent yellow staining applied to pick out smaller details such as on the horses’ bridle.

History of the Window

The panel is one of an extensive series depicting episodes associated with York’s patron saint, St William. The St William window is located in the Lady Chapel of York Minster, Archbishop de Thoresby’s four-bay eastern extension to the choir, the foundation stone of which was laid on 30 July 1361. The chapel was completed c. 1373. The reasons for such a creation, as cited by Thoresby to the Pope, were liturgical (due to the growing importance of the cult of the Virgin) and aesthetic, as he felt it important to have such a place of beauty, adornment, and consummate craftsmanship. The glazing scheme followed in stages after Beatrice, the Dowager Lady Ros of Helmsley was secured as the donor for the St William window. Completed in c.1414/15 to commemorate William Fitzherbert (Archbishop of York, 1143–54, canonised 1226), the St William window was a result of the revival of the cult of the city of York’s only patron saint.

The monumental window is hence extremely culturally specific. William’s tomb in the nave and the later shrines in the choir were prominent elements in the medieval Minster, yet his most important surviving monument is the 78 foot high (23.77m) stained glass window in the north choir transept. The glass is one of the largest extant pictorial life cycles of a saint, with ninety-five panels of the life and posthumous miracles of St William, kings and bishops in the tracery and five donor panels of the Ros family residing at the base. [Fig. 1] Together with the Great East window (1405–08), and the St Cuthbert window (dated c.1440), these three colossal walls of glass act as a triptych for the east end of the Minster, projecting the theme of the Northern Church and its relationship to the Universal Church.

The three windows were amongst the latest additions to the glazing scheme of this part of the church, and form the most developed depictions of medieval architecture.

Although we have no documentary evidence relating to the contract, the date and patronage of the window can be deduced by other means. The five donor panels at the base of the window identify the patrons of the glass as the Ros of Helmsley family. The narrow band of plain glass beneath the donor panels suggests that a commemorative inscription may have run along the bottom of the window. The window is thought to be the gift of Dowager Lady Beatrice owing to her figural depiction in the ‘place of honour’ in the easternmost light, nearest to both the high altar and St William’s shrine which was located behind it. She is thought to have given the window just before her eldest son William’s death in 1414.

No glazing contract survives for any of the painting, but conservation of the window by the York Glaziers Trust has confirmed that it was produced by the workshop of John Thornton. This has been established by stylistic comparisons with the equally exceptional composition of York Minster’s east window (dated 1405–8), which is documented to be by Thornton. Thornton came to York after being asked by the Dean and Chapter to execute the painting of the east window, yet his workshop appears to have continued to practice after this commission. Stylistically, the two windows are similar, with many details from the east window cartoons evidently reworked for the St William window. While Janice Smith’s detailed study (see Further Reading) has revealed the work of at least four painters, many formal characteristics deployed in the overall composition, such as architectural framing devices and recurring character forms, indicate that it is the product of a single designer.

The Iconography of Buildings

As the stained glass art historian James Bugslag has argued, the functions of architectural elements in glass are rather ambiguous, but they often act as markers of spatial setting, status or perhaps most commonly, symbols of biblical settings. He terms this use of architectural space ‘pictorial vocabulary’, open to multiple interpretations and perceptions from those who viewed them. Thus architectural motifs are ‘anthropomorphic’ in that they create a space within the pictorial field, relative to the figures, separate from the viewer on the one hand, whilst relating the imagery to its audience on the other.

The most recurrent form of architectural space found in stained glass is the ‘shorthand’ representation used to denote buildings. These are more than simple canopies or architectural niches, rather they are miniature structures displaying literal renderings of complex architectural elements. The Great East window at York Minster contains a vast amount of them, such as in panel 7c where a circular city of battlemented walls, an open gateway with raised portcullis, numerous traceried windows and churches are represented in incredible detail. [Fig. 2]

Being suitable for all types of narrative, whether biblical or hagiographical, such depictions of buildings rapidly proliferated, appearing in a large number of panels and assuming an increasing amount of space. As a result, they had the potential for a new role, conveying more than simple architectural structures in the biblical narratives or saint’s lives. As these types of structures became more realistic, viewers could relate them to their own experience.

Identification with the City of York and its buildings is apparent throughout the St William panels. This is not surprising given William’s status as the patron saint of York and hence his presence is continually associated with the city’s iconic structures. Almost all of the key monuments of the medieval city are represented, including the Ouse Bridge, [Fig. 3] the Minster, various city gates and also William’s tomb and shrine. Not only did this promote the city itself, but it strengthened the bond between William and his people. By repeating these identifiable monuments throughout the huge window they become symbolic representations of important buildings associated with the saint’s life and miracles, even if they are not absolute literal renderings of the physical structure they were portraying.

The accuracy of such structures was not important. Although Micklegate Bar, the city gate depicted in our panel, is identifiable, it is not an architecturally accurate depiction. It clearly represents an important ceremonial entrance, thereby confirming the status of the City of York. An official entrance, it was used to greet important guests, creating a theatrical display for their benefit. Its depiction in our panel thus reflects civic pride and unity.

The presence of identifiable buildings in the window not only set the scene for the figures contained within them but they projected their significance onto the viewer. As the types of monuments that occur in these scenes were extremely important to the foundation of the city and its identity, depictions of York Minster and Micklegate Bar also needed to be proportionally colossal in such small scenes. In the panel where a sick woman is brought to York Minster (11d), [Fig. 4] the Minster protrudes from the right side of the scene whilst acting as background scenery. Its two western towers elevate to the frame of the panel, along with the gabled roof and traceried window. Again there is little sense of perspective or depth, but it is clear that although the Minster resides in the background, its size dominates the composition.

In panel 9d of the St William window, William kisses the cross outside York Minster. [Fig. 5] The cathedral is shown in equal height and stature to its counterparts in the scene which include William, a priest, possibly the Dean and the Lord Mayor. Crocketed gables and finials are added to the Minster here to create a sense of grandeur, fitting for such worthy characters, but the similar ogee-arched window, as used in representations of the Minster in other panels, e.g. 9d (above), may suggest that this is once again the same front.

The depiction of the Minster is thus modified according to its context, while remaining recognisable. It may not be a precise rendering of the architectural reality, but it plays an important role in enhancing the interdependent identities of St William and his city.

The practice of symbolising civic messages through architectural compositions can be seen throughout the glass of the medieval period in almost every celebrated iconographic scheme. Some of the most creative architectural displays can be found in the late 12th-century Life of St Alphege window in the north quire aisle of Canterbury cathedral (Nt. IX), which includes a depiction of the siege of the city in 1011, [Fig. 6] the Great East window at York Minster, [Fig. 2] and in the 15th-century glass of the church of St Peter Mancroft, Norwich. [Fig. 7]

David King’s recent interpretation of the glazing scheme at St Peter Mancroft questions what degree of the narrative sequences were conditioned by the urban context of the church (see Further Reading). Significantly, once again he highlights the recurrent nature of the architectural scenes in the glazing scheme and ponders the notion that they were included to heighten the ‘emotional and spiritual empathy experienced by a viewer (regardless of how familiar the narrative was)’ by placing the figures in familiar landscapes and buildings.

On the Stained Glass of York Minster

On Architecture within Glass

On the St William Window at York

On the church of St Peter Mancroft, Norwich