The Angels of Swinbrook: A Picture Essay

Fig 1. The Church of St Mary, Swinbrook, across the river Windrush.

Although best known for its triple-decker seventeenth century monuments of members of the Fettiplace family, the parish church of St Mary in the picturesque Oxfordshire village of Swinbrook (three miles east of Burford) also contains unusual medieval stained glass images of angels which deserve a wider audience. Identical in size and largely repetitious in design, the figures are notable for their distinctive facial expressions, unlike any other glass in the county [Figs 1 and 2].

The six half-bust angel figures date from the second half of the fifteenth century and are executed in brown paint on white glass. Fine stipple shading and some slight smear shading has also been used. In addition, yellow (silver) staining has been applied to the angels’ hair, the cross diadems on their heads and to the tips of their feathered wings.

Two of the figures can be seen in the tracery lights of the chancel east window (CVMA numbering system I), which dates from the late fifteenth century [Fig. 3].

The other four are among pieces arranged in the east window of the south aisle (CVMA numbering system sIII) [Fig. 4]. 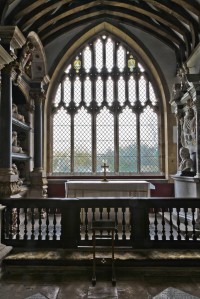 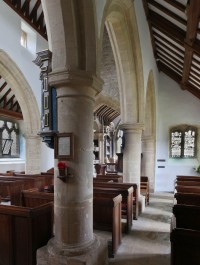 This arrangement, of glass salvaged after a wartime explosion, dates from after 1945. An inscription in the window tells its own story

‘These fragments of old glass formerly filled the upper tier of the east window. A German land-mine, with parachute attached, was dropped in a field between the church and the river at 9.20 in the evening of 26 September 1940. The explosion shattered the windows, displaced roof tiles and shook down plaster throughout the church….but no one was hurt. This inscription has been placed here in thankfulness to God for our merciful deliverance and in memory of William Grenville Boyd, Vicar 1938 -41, who collected and began arranging this old glass.’

Prior to the explosion the angels thus filled six of the eight tracery lights in the main east window, but it is not clear if this was their original location. Some accounts suggests that they were among scraps collected from elsewhere in the church and installed in the east window when it was repaired in 1863. Certainly, some medieval windows were blocked up at an earlier date when eighteenth-century monuments were built along the south chancel wall.

A second problem concerns how the figures might have related to the overall composition or iconographical programme of a window or series of windows. Did they appear together or were they spread over several windows? What meaning did they have? Some writers have suggested that they were part of a Nine Orders of Angels series, a popular subject in fifteenth-century glazing schemes. At New College, Oxford, a late fourteenth-century scheme of this subject saw the angels clothed differently according to their ‘Order’, but there is nothing to suggest the same at Swinbrook. A more likely suggestion for the Swinbrook scheme by the CVMA author, Dr Peter Newton (1935–1987) is that they once held shields of arms, a conclusion supported by the downward cast of some of the angels’ eyes.

Drawn from several cartoons, the style of the Swinbrook angels is unlike any other surviving glass painting of this date in the county. Among the possible explanations are that they were painted by an as yet unknown local workshop or artist or that while the scheme was commissioned locally, the workshop which supplied the glass was based in other parts of the country where the patron’s family had additional estates, or had been recommended to them by others, or whose work they had seen and admired in other churches.

Two candidates – John Croston and Anthony Fettiplace – stand out as possible patrons of the glass. John Croston’s memorial brass of c. 1470, in the chancel floor, shows him flanked by his three wives. He wears armour, his feet resting on a collared greyhound [Fig. 5 ]. 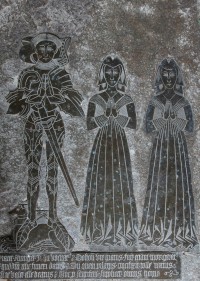 Fig. 5. John Croston with two of his three wives.

The brass is in the style of the London D workshop (so called as to differentiate it from the output of otherwise unknown workshops identified as ‘A’, ‘B’ etc), a workshop which also produced the memorial brasses of Dean William Prestwick at Warbleton (Sussex) and Richard Willoughby at Wollaton in Nottinghamshire. Another notable commission was that of Ralph, Lord Cromwell and his wife Margaret (now sadly mutilated) at Tattershall in Lincolnshire, again datable to the 1470s, and possibly laid down about the time of the completion of the chancel of Tattershall in 1475-6.  If the windows which included the angels were commissioned by Croston, it is possible that the family also knew London-based glass painters.

The second contender as possible patron of the glass, Anthony Fettiplace (1460 -1510), was a powerful local figure with extensive contacts in London and other counties. He owned the Swinbrook estate from at least from the mid-1480s. His brass is also in the chancel floor and shows the figure of a man in armour with a heraldic tabard and his head resting on a crested helmet. It was produced by the London F workshop, based in St. Paul’s churchyard [Fig. 6]. 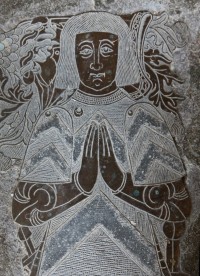 The second son of a wealthy and well connected London draper, Anthony was an Esquire to Henry VII and seems to have spent his life serving the crown in a number of capacities. In 1485-86 he was appointed keeper for life of the nearby park of Cornbury and in 1488 was, with others, commissioned ‘to summons all Earls, Barons Knights and other Nobles in the county of Oxon, to examine how many archers each is bound to find for the king’s army, and to take the numbers of those archers preparatory to the expedition for the relief of Brittany, and to make return of the premises to the King in person.’ He was sheriff of Berkshire in 1495, and a few years later he was made Steward of the Manors of Minster-Lovell, Cogges, Burford, Shipton, and the hundred of Chadlington, all in Oxfordshire and of the Manors of Hatford, Langley, Aston Tirrold and West Compton in Berkshire. It is likely that he acquired the Swinbrook estate via the Croston family as the Fettiplace arms appear in the upper dexter corner of the stone of John’s brass.

By the time of his death Thomas also owned the manor of Childrey in Berkshire. His descendants subsequently erected a number of spectacular moments in the chancel of Swinbrook church, including two triple-decker schemes on the north wall and an impressively carved marble bust of Sir Edmund Fettiplace (died 1743) on the south chancel wall by the London sculptor, James Annis.

The East window (I) 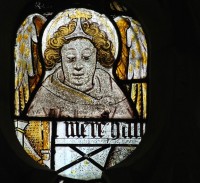 Window I, Panel B2 [Fig. 7]: The angel at the left of the window (B2) has big eyes and an over-large nose, giving him an individual character. His mouth hints at a smile. He wears a cross diadem. Peter Newton called it the image ‘coarse’. Others have found it dryly amusing.

Window I, Panel B7 [Fig. 8]: The second angel on the right (B7) has a flatter expression. His eyes look downwards. He wears a cross diadem.  He is from the same cartoon as two of the angels in S.III, 2a and 2b. 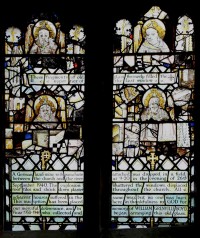 Four angel half-busts to be found are among a mosaic of fragments which include the remains of a (saint’s?) hand holding a book, the foreleg of a horse pieces of canopies and a chequered tiled pavement [Fig. 9].

Window sIII, Panel 2a [Fig. 10]: This bust-length figure was shattered in the bomb blast. The pieces have been edge bonded and plated on both sides. The wings are incomplete at the top. The design is from the same cartoon as IB7.

Window sIII, Panel 2b [Fig. 11]. This figure was also shattered and repaired. It is from the same cartoon as IB7.

Window sIII, Panel 4a [Fig. 12]: Another shattered figure repaired as (2a) 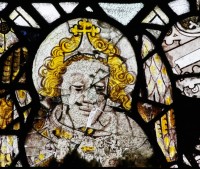 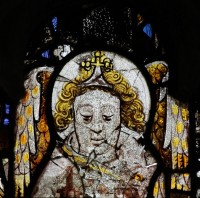 Window sIII, Panel 4b [Fig.13]. This figure seems undamaged. It is drawn from the same cartoon as B2 in the chancel east window (I) .

Readers are invited to send comments on these unusual angels to: features@vidimus.org 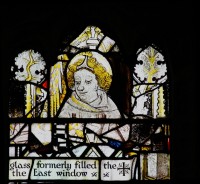 All images are © YM pictures