Thanks to a chance in a thousand, curators from English Heritage have finally been able to identify the original location of stained glass excavated at one of North Yorkshire’s most famous abbeys in the 1920s. 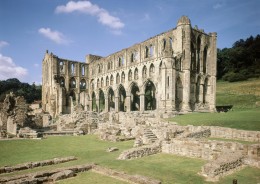 Rievaulx Abbey, approximately thirty miles north of York, was founded in 1131 by Walter Espec. It was intended to be a Cistercian mission centre from which Cistercian colonies were sent out to found daughter houses throughout the north of England and Scotland. By the early thirteenth century the abbey was one of the wealthiest in England with 140 monks. Its ruins are now a major tourist attraction. The site is in the care of English Heritage [Fig. 1].

The abbey was dissolved in 1538 and its fittings stripped. An inventory compiled in early Spring 1539 specified that the glass was to be ‘layd up under lok and key and kept out of danger’ before being categorised as to be kept, sold or melted down for lead. 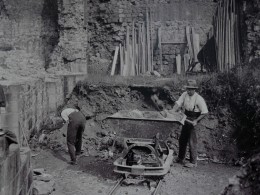 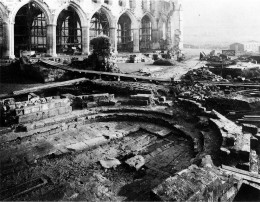 The site was excavated in the 1920s when de-mobbed servicemen were put to work clearing centuries of accumulated rubble. The project was led by Sir Charles Peers (1868-1952), an eminent archaeologist [Figs 2 and 3].

Thousands of fragments were recovered during the clear-up but for many years it proved impossible to say whereabouts in the abbey the glass came from as researchers were unsure which fragments had been found where.

Recently, however, while flicking through eleven folios of colour drawings made in 1920-21 which illustrated some of these fragments at the time of their discovery, Susan Harrison, an English Heritage curator, struck gold [Figs 4 and 5]. The picture on the page was identical to the fragment of glass she was holding in her hand – literally a one in a thousand chance! 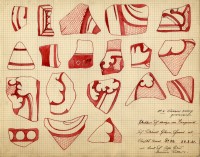 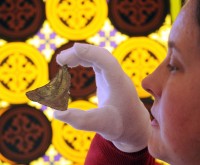 The paintings described the fragment as having been found in the ruins of the former chapter house. Dr Pam Graves, of Durham University, has dated the glass to the thirteenth century.

Susan told Vidimus, “We have now matched fifty-six fragments with the 1920s paintings. We are very grateful to Dr Pam Graves for her help with this project”.

Some of the historic glass has now been returned to Rievaulx Abbey and put on display in the site’s museum, along with copies of the 1920s paintings and other finds.

G. Coppack, ‘Some descriptions of Rievaulx Abbey in 1538-9: the disposition of a major Cistercian precinct in the early 16th century’, in Journal of the British Archaeological Association, 129 (1986), pp. 100–33 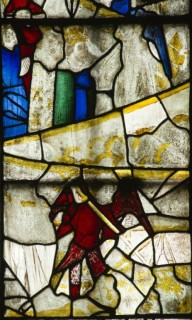 An exciting exhibition of new designs in stained glass scheduled for 22nd September – 31st December will feature a recreated cartoon by the well-known glass painter, Jonathan Cooke, of a panel from the Savile Chapel east window (nII, 2-3b), at the parish church of St Michael and All Angels, Thornhill, West Yorkshire.  It shows St Michael weighing souls, and the entry of the Blessed into the Heavenly City [Figs 6, 7 and 8].

The severely degraded interior surface of the white glasses of the east window has been the subject of presentations at the History and Heritage Group of the Society of Glass Technology (SGT) in Lancaster in 2009 and Cambridge in 2010, and the ICON conference in York in May 2009.  For the past year the Yorkshire-based team of Jonathan and Ruth Cooke have been monitoring the environment around the east window under the expert guidance of Dr David Martlew and other eminent SGT members, and with funding from English Heritage. Conservation work to the north side windows nIII, nIV and nV is due to start later this year as part of a major restoration of the Savile Chapel, with funding from English Heritage, the Church Building Council and The Glaziers Trust. The deteriorating condition of the east window gives ongoing cause for concern, and will be the subject of further papers at the History and Heritage Group of the Society of Glass Technology’s conference at Oxford in September.

Prior to the nineteenth-century restoration of the chapel glazing by Burlison and Grylls, as part of the reordering  of the church by the architect G E Street (1834 -1881), tracings were taken of some of the glazing.  These were subsequently discovered under one of the Savile monuments in the chapel and deposited in the West Yorkshire Archives at Wakefield.  In view of the parlous condition of the glass of the east window, Jonathan Cooke offered to recreate a single panel 2b and lower part of 3b based on the tracings and the evidence of the window itself, to give an impression of how it might have originally appeared in 1493; this has been welcomed as part of the ongoing debate by the PCC and English Heritage. Special thanks are due to Thornhill PCC who paid for Jonathan Cooke to spend a day in the Archives studying the Burlison and Grylls cartoons. 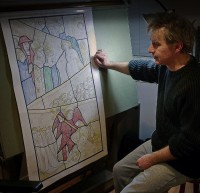 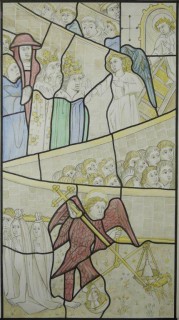 Following the successful exhibition of Jonathan Cooke’s work at Lotherton Hall, near Leeds, in 2008, there will be an exhibition of his new work, together with that of Helen Whittaker of Barley Studios, at the same venue in the Autumn.

Entitled ‘Angels and Demons’ , it is planned that the Thornhill cartoon and a new stained glass panel depicting the entry of the Saved into the Heavenly City with St Michael weighing souls will also be exhibited there, after being displayed at Thornhill Parish Church.

For further information on the forthcoming ‘Angels and Demons’ exhibition at Lotherton Hall, please visit Jonathan Cooke’s website, or email Jonathan Cooke at enquiries@jonathancooke.org, or Helen Whittaker at helen@barleystudio.co.uk.

For information about the church at Thornhill, visit the church’s website.

For images of the stained glass at Thornhill, visit the Picture Archive of the CVMA (GB) website.

The Savile Chapel glass at Thornhill Parish Church was featured in issue 27 of Vidimus.

L.S. Jones, ‘St Michael and All Angels, Thornhill: a catalogue of the mediaeval glass’, PhD thesis, University of York, 1971

Stained Glass on Show in Chicago until 30 May 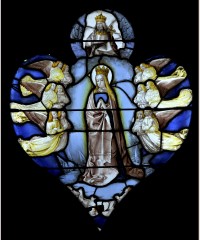 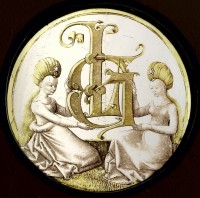 Important examples of French medieval stained glass are among the highlights of a superb new exhibition at the Art Institute Museum in Chicago (USA).

Other treasures on display include paintings, tapestries sculpture and illuminated manuscripts.

For further information about the exhibition and its accompanying catalogue, visit the Art Institute’s website.

We are sad to note the death, on 29 January, of Harry Harvey, aged 88. He was a leading figure in contemporary stained glass design and completed more than two hundred windows in a career lasting forty years. He trained with Harry Stammers in York, before opening his own studio in 1956. His best known work is probably that carried out for the Guildhall in York, but he also made windows for over seventy churches in Yorkshire alone. More recently he collaborated with Keith Barley at St Mary’s, Fairford (Gloucestershire). Harry was elected a Fellow of the British Society of Master Glass Painters in 1962.

Led by a team of cathedral guides, the day will include a short film on the making of a stained glass window, followed by tours of the cathedral’s important medieval stained glass in the east window, Lady Chapel and cloisters. After a light lunch in the Cathedral Function Suite (stair access only), the afternoon session will be spent studying Victorian and later glass. This includes work by well-known nineteenth-century firms such as Clayton & Bell, Hardman’s and C.E.Kempe, twentieth-century windows by Christopher Whall and recent installations by contemporary artists such as Caroline Swash and Tom Denny.

The study day will run from 10.15am – 3.45pm. The price, including lunch, is £20. All the proceeds from the event will go towards the upkeep of the cathedral. Places are limited to 25. To make a booking or to ask for further information contact Christine Turton in the cathedral office on 01452 508210 or by email: christine@gloucestercathedral.org.uk

The Splendour of Stained Glass from Medieval to Modern Times: Exhibition in Paris until 24 April

A new exhibition is on view at the Gallery Les Enluminures in the Louvre des Antiquaires Centre, Paris. 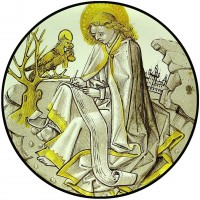 The exhibition features more than twenty pieces of stained glass from the fifteenth to the twentieth centuries and is the third exhibition devoted to stained glass which has been organized by the gallery since 2004.

Among the medieval pieces are a late fifteenth-century (possibly Parisian) roundel of St. John on the island of Patmos and two English half-length angels [Figs 11 and 12].

A complete PDF version of the exhibition catalogue can be downloaded here.

Admission is free and the Gallery is open every day, except Monday, from 11 am to 7 pm.

The British Society of Master Glass Painters’ Annual General Meeting and Summer Lecture will be held on Friday 17 June at the Art Workers Guild, Queen Square, London WC1. Admission is by ticket only.

The AGM will begin at 5pm followed by a lecture by Pippa Martin about ‘Lawrence Lee: master stained glass artist of the twentieth century’ (6.15pm for a 6.45 pm start). Following an introduction by Alf Fisher, Pippa will present an illustrated history of Lawrence’s life and work. Colleagues and students will add their reminiscences. There will be a small exhibition of archive material in the hall.

For more information about the life and work of Lawrence Lee, see issue 32 of Vidimus. 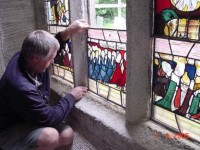 For Conservation in Focus page, visit the BSMGP website.

Vidimus readers who have interesting or relevant material for possible publication should contact Steve Clare, the chairman of the BSMGP’s conservation working group, at stained.glass@tiscali.co.uk

This month’s puzzle comes from the parish church of St Helen in York. It shows a woman holding a shield and carrying a column riding a unicorn which is trampling on a woman lying on the ground. Cupid is by her side. To the left of the scene a figure sits on a raised throne holding a palm branch [Fig. 14]. 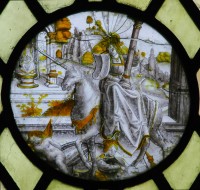 Measuring 22cm, the roundel consists of grey-black paint and yellow stain of an orange tint. It has been dated to c. 1525. The glass is badly fractured and has been plated.

What subject does it depict?

Roundels and other single panels of this period typically depict a range of subjects, including stories from the Old and New Testaments, the Lives of saints, and tales from ancient history and classical literature, such as Homer’s Odyssey. Moral themes can also appear.

The solution can be found at the foot of this month’s Books section.

7 – 9 September: Society of Glass Technology, Annual Conference, Oxford. The conference will include a paper by Alun Adams of Swansea Metropolitan University on Celtic Studios, and a tour of Oxford stained glass by Paul Sancasciani FMGP. For further information on the SGT conference contact Dr David Martlew at  david.martlew@gmail.com

26 – 28 September:  CVMA Forum for the Conservation of Stained-Glass Windows Forum on Stained Glass after 1920: technology and conservation in Lisbon. More details are available here.

Until 25 March: Through the Eye of the Collector: A Rare Glimpse of Stained Glass from Private Collections, at the Stained Glass Museum, Ely Cathedral. For more details, visit the museum’s website.

Until 15 May: Stories to Watch: Narrative in Medieval Manuscripts at the J. Paul Getty Museum, the Getty Center, Los Angeles, USA. For more details, visit the Getty’s website.

Until 3 July: Brian Clarke, Life and Death at the VitroMusée, Romont, Switzerland. For more details, visit the museum’s website.

Until 5 August: Treasures of Heaven: Saints, Relics, and Devotion in Medieval Europe at the Walters Art Museum, Baltimore. For more details, visit the museum’s website.

From 23 June 2011 – 10 September: Treasures of Heaven: Saints, Relics, and Devotion in Medieval Europe, at the British Museum, London. For more details, visit the museum’s website.