Memory and Commemoration in Medieval England

For more than twenty-five years many of the world’s leading medieval historians have gathered at Harlaxton College in Lincolnshire for an annual symposium on a particular theme. The 2008 conference – whose papers are published here – focused on how medieval people remembered those who had died and how they commemorated significant events. Essays in the book considers commemorative activity in relation to stained glass, wall paintings, monumental effigies, tomb inscriptions, the liturgy, obit books, cartularies, and pilgrimage [Fig. 1]. Four essays discuss stained glass. 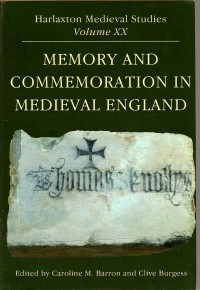 Mileham
Claire Daunton considers the patronage of two schemes of different dates in the parish church of St John the Baptist at Mileham, a small village in mid-Norfolk. She begins by exploring the patronage of  a scheme in the upper half of the west window. Dating from the 1340s it shows  St John the Baptist flanked by St Catherine of Alexandria and St Margaret on Antioch, two popular female saints of the period. She assigns the window to the patronage of Richard Fitzalan, the third earl of Arundel and one of the richest men in England at that time. Not only did he own the living and appoint the rectors to the church, but the expensive quality of the masonry in the window, together with suggestions that the west window of churches was often used as a focal point for major secular patrons to proclaim their patronage, makes a persuasive case for this attribution. The patronage of the second scheme in the church was given by someone of a very different social standing.  Dating from the 1420s, it includes the remains of the figure of a packhorse, two donor figures and the inscription ‘broun’ [Fig. 2]. Daunton suggests that it was given by a local man who made his living as a carrier of goods along the busy road that passed through the village.

Together the schemes show how people of different social ranks funded glass to express similar motives of status, lineage and intercession; separately they highlight  how local people of ‘the middling sort’ were slowly making claim to their parish church in a way that might have seemed impossible barely a hundred years earlier.

Warwick
The second chapter of special interest to Vidimus readers is by Professor Richard Marks and focuses on the chapel of Richard Beauchamp (d. 1439), Earl of Warwick, at St Mary’s church in the town of the same name. Despite losses over the centuries this still remains a remarkable building with a copper-gilt effigy of the earl surrounded by magnificent stained glass windows made by John Prudde, the king’s glazier [Figs. 3 and 4 ]. 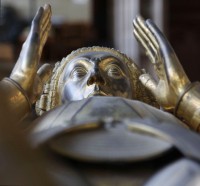 Although many authors have described the chapel, Professor Marks’ contribution sheds new light on the glazing scheme in what the author calls, ‘the most spectacular funerary ensemble of its day’ (p.163).
Two points stand out. The first is the political symbolism of the choice of saints depicted in the windows. Apart from the Virgin Mary, all were English born, or in the case of St George, English by adoption. They were included because they had a special appeal to the ruling Lancastrian elite and to Beauchamp, who had supported Henry IV’s overthrow of Richard II and fought alongside his son, Henry V in France. These included St Alban, a favourite of Henry V’s brother,  Humphrey Duke of Gloucester, and St Winifred, who was credited with curing the future Henry V of a head wound he sustained as a sixteen-year old at the battle of Shrewsbury (1403). Without exception the saints are depicted wearing fashionable armour or beautifully brocaded garments casting them as the earthly equivalents of well-dressed royal courtiers – ranks akin to the earl himself. The reverse may have also been intended – that the Heavenly Kingdom they inhabited was somewhere the Earl would equally feel at home, making it a place memorably described by the author as ‘rather like the Royal enclosure at Ascot used to be’; an exclusive milieu for the highest in the land [Fig. 5].

The author also scrutinises some of the complexities involved in the patronage of the chapel. The outline history is straightforward. Two years before his death the earl wrote a will ordering the building of the chapel and appointing executors to carry out his wishes. The work they commissioned, almost certainly with the approval of prominent members of the earl’s family (primarily his daughter Anne), is well documented. Copies of the contracts they signed with craftsmen like John Prudde have survived. The resulting ensemble of effigy, stained glass, wall painting and sculpture has often been seen as a Gesamtkunstwerk, or total artwork, but as Professor Marks observes, the earl was only the donor of the chapel, not the patron of the works. The scheme – subject to the evolving preoccupations of his executors and descendents – was not complete until long after his death. This is an outstanding account of how the realization of a testator’s wishes can reflect significantly changing historical circumstance.

Heydour
David King contributes the third chapter of special note, a study of a window of c.1360 that literally bristles with warrior imagery, at the church of St Michael, Heydour (Lincolnshire).
The main lights shows St Edward the Confessor, St George (the patron saint of England) and St Edmund, King and Martyr, framed by elaborate canopies. Below them were heraldic panels and a now lost inscription bearing the arms and name of Sir Henry Scrop(e).
Several unusual features are singled out for discussion. First, Saints Edward and Edmund are shown without haloes and depicted as soldiers wearing armour and carrying shields. The figure of St George is singled out for additional comment with the author drawing attention to its similarities with figures in the Luttrell Psalter, an extensively illustrated medieval manuscript painted 1320–40, now in the British Library. Next, the canopies they stand under are micro-examples of state of the art military architecture with circular gun points in the towers. Finally, the lost inscription was in Anglo-French, the language of chivalry, rather than Latin, the language of the church [Figs 6 and 7]. 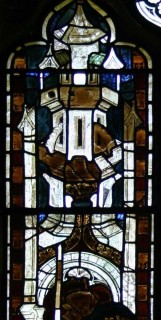 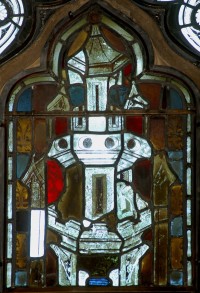 The window pulses with memories of the English victories in France at Crécy (1346) and Poitiers (1356) and chivalric celebrations such as the Foundation of the Order of the Garter (1348). It is secular, masculine and military.

Thornhill
The final chapter to discuss stained glass in any depth is by Mellie Naydenova-Slade. She argues that depictions of the extended Holy Family in a window in the Savile Chapel at the parish church of St Michael and All Angels, Thornhill (West Yorkshire), were designed to affirm the importance of family ancestry to the donors of the glass.

As the Bible said very little about the genealogy of the Virgin Mary, a family tree of sorts (the Holy Kinship) was invented by Christian writers between the fourth and ninth centuries. It found its way into the Golden Legend, a widely circulated compendium of saints’ lives and holy stories compiled around 1260 by Jacobus de Voraigne, Bishop of Genoa. According to this account St Anne, the Virgin Mary’s mother, had three marriages, first to Joachim, and subsequently to Cleophas and to Salome. Each of the later marriages produced a daughter: Mary Cleophas and Mary Salome. Both Marys then married Alpheus and Zebedee respectively and in turn had children of their own who became disciples of Christ, namely James the Less, Simon and Jude (Mary Cleophas) and James the Great and John the Evangelist (Mary Salome). Another member of the extended Holy Kinship was St Elizabeth, the daughter of St Anne’s sister, Hismeria.

Images of the Holy Kinship became increasingly popular among wealthy patrons in the fifteenth century. Naydenova-Slade suggests that this was partly fuelled by the desire of eminent families to emphasise the significance of their own lineage by association with the extended family of Christ. She cites, for example, the panel painting made in 1515 by the German artist Bernhard Strigel (c.1461–1528) for the Holy Roman Emperor, Maximilian I (1459–1519). It shows his family as members of the Cleophas family. She also explores the interest of members of the rising middle class in emulating knightly culture by adopting a similar interest in family connections.
The glazing of the Savile Chapel (built 1447) at Thornhill is discussed in greater depth. Window nIV shows St Anne, Joachim, the Virgin and Christ in the middle light flanked by the Virgin’s half-sisters with their spouses and children in the two side lights. When it was made the window also included images and inscriptions identifying the donors of the window as St Thomas Savile and his wife Margaret. Naydenova-Slade suggests that the choice of subject reflected Sir Thomas’s own immediate ancestors and the way he acquired his title and his property at Thornhill, thanks to the marriage of his parents which in turn had been engineered by his grandfather.

Other contributions
Some other chapters also mention stained glass. The best is Sally Badham’s examination of two monumental brasses in the nave of the parish church of St Peter and St Paul at Algakirk (Lincolnshire) commemorating members of the Robertson family, members of the Staple of Calais, a trading company which controlled the export of English raw wool to the continent. Among several references to glazing schemes associated with the family, she includes an inscription formerly visible in the church mentioning Nicolas Robertson and Isabella his wife ‘who caused these windows to be made both the stone and the glass at their expense in 1492’. She also mentions the appearance of Robertson in the windows of other churches supported by the family’s bequests.

Apart from the chapters featuring stained glass, the book has a feast of other interesting contributions ranging from Pamela Tudor-Craig’s recall of how the Harlaxton conferences began, to David Griffith’s study of inscriptions in churches and Paul Binski’s thoughts on developments in the study of medieval art since 1983.
Together, they form one of the best volumes in the series to date, produced as usual to a high standard by the specialist publisher, Shaun Tyas, who seems to get better with every passing year.

A full list of the Harlaxton Medieval Symposium volumes (and their contents) can be found here.

Through the Eye of the Collector: A Rare Glimpse of Medieval Glass from Private Collections 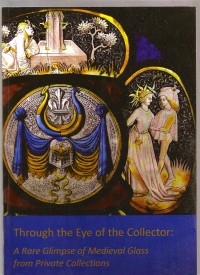 Fig. 1: Through the Eye of the Collector: A Rare Glimpse of Medieval Glass from Private Collections

This is a well-illustrated catalogue of a delightful exhibition held at the Museum between 30 January and 25 March this year: see Vidimus 48.

The catalogue introduces the five private collectors – Nicholas Ferguson, Sam Fogg, Robert McCarthy, Andrew Rudebeck and George Wigley – and describes their loans. Each item is illustrated. Although only a small exhibition, the thirteen pieces on display range from thirteenth-century French glass to sixteenth-century Swiss. Some good examples of English work add to the book’s enjoyment.  To obtain a copy visit the Stained Glass Museum’s website. 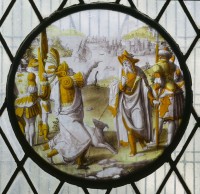 The late William Cole (d. 1997) thought that this panel showed Hazael pointing to Elisha from the second book of Kings VIII, 13, but this identification is questionable as the image in the roundel and the Biblical text seem to bear no relationship to one another. A more promising suggestion is that the subject shows a scene from Greek mythology perhaps Achilles and Agamemnon on the Trojan shore with the Athenian fleet in the background but again it is impossible to be certain.

As a result … this month’s puzzle has us flummoxed!
Suggestions from readers would be most appreciated. Please send to news@vidimus.org