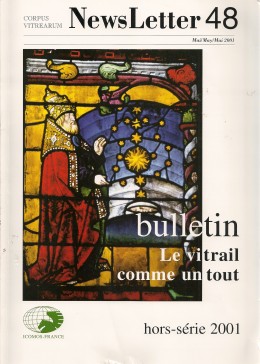 The Newsletter was published on an occasional basis between 1972 and 2001. What began as a typed circular for conservators, produced under the auspices of the British technical subcommittee by the seemingly indefatigable Roy Newton, increased in length and readership over a number of years. Responsibility for publication subsequently came into the hands of the Corpus Vitrearum International, and production moved from the Department of Physics at the University of York, first to ICCROM (International Center for the Preservation and Restoration of Cultural Property) in Rome, then to the Centre International du Vitrail in Chartres, and finally to the Centre Suisse de recherche et d’information sur le vitrail in Romont, from where the last two issues of the Newsletter (47 and 48) can still be purchased.

The Newsletter covers an extraordinarily wide range of material, including reports on one-off trials, detailed discussions of materials used in restoration, and coverage of important ongoing experiments. There is also a significant series of several hundred abstracts, the continuation of a series initiated by Roy Newton before the first issue of the Newsletter appeared. While the first issues of the Newsletter are in English, nos. 5–25 appeared in English and German, and thereafter issues contained material in English, French and German.

In 2010, the copyright holders (the British CVMA and the Corpus Vitrearum International) kindly gave permission for the Newsletter to be made available in pdf format on the web. The Newsletter is now freely available on the website of the Corpus Vitrearum International, together with a detailed introduction, the complete series of abstracts, a concordance, and – most importantly – a brand new index to all issues of the Newsletter. 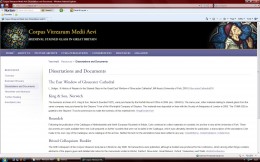 We have also initiated a document repository where users will be able to find materials not available anywhere else. This significant resource already contains a great deal of interest. There is Leonie Seliger’s MA thesis on the east window of Gloucester Cathedral; an inventory of the important archive of G. King & Son held at the Norfolk Record Office; three files of materials relating to William Cole’s proposed revision and expansion of his Catalogue of Netherlandish and North European Roundels in Britain; and the preprints of the Corpus Vitrearum colloquium held in Bristol in 2000.

The CVMA (GB) is grateful to the British Academy, Leonie Seliger, the Glaziers’ Trust and the University of York for their kind permissions to make these materials available. 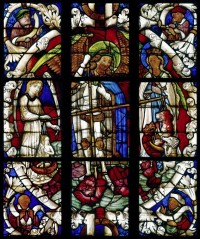 The German (Potsdam) committee of the Corpus Vitrearum has just published a superb two-volume study of the medieval stained glass of Berlin and the surrounding state of Brandenburg. Entitled Die mittelalterlichen Glasmalereien in Berlin und Brandenburg, the book covers sites such as the Cathedral of St Peter and St Paul at Brandenburg an der Havel, St Mary’s at Frankfurt (Oder), the pilgrimage church of St Nicholas at Bad Wilsnack [Fig. 3], and the holdings of the Berlin Applied Arts Museum, one of the most important collections of medieval stained glass in Germany.  It includes contributions from Ute Bednarz, Eva Fitz, Peter Knüvener, Frank Martin, Markus Leo Mock, Götz J. Pfeiffer and Martina Voigt. A major review of this important publication will appear in a future issue of Vidimus.

The latest issue of the British Academy Review is now on-line. It includes an article by the CVMA author, Dr Penny Hebgin-Barnes, on some fascinating post-Reformation glass at Sefton in Lancashire. To download the article click here and scroll down to the Medieval Scenes section.

The British Academy is the UK’s national body for the humanities and social sciences and provides invaluable support for the Corpus Vitrearum Medii Aevi (GB), the publishers of Vidimus. The Academy also publishes the CVMA’s monographs and county surveys of medieval stained glass, including Dr Hebgin-Barnes’ recent books on Lancashire and Cheshire.

An important book by the nineteenth-century heraldry expert and stained glass artist, Thomas Willement (1786–1871) can now be read on-line here. A Concise Account of the Principal Works in Stained Glass That Have Been Executed was published by Willement in 1840 and contains a record of his work from 1812 when he undertook a commission for the Trevanion family in Cornwall, up to 1840 when he made two large windows for Cambridge University Library.

Willement was a pioneering stained glass artist in the early nineteenth century, experimenting with medieval techniques. The book lists many of his commissions and gives valuable insights into the subjects he painted and the clients for whom he worked. By around 1834, his wide knowledge of heraldry saw him appointed heraldic artist to George IV and later ‘artist in stained glass to Queen Victoria’. By this time he had already published several works on heraldry. In 1840, he made four heraldic windows for the choir clerestory of St George’s Chapel, Windsor, work which later extended to the choir aisles, the Beaufort and Lincoln chapels, and the chapter room. In 1844, he published a description of the restoration of the great west window at St George’s Chapel.

In 1843, he was employed to make an armorial window for the great hall at Hampton Court Palace, on the outskirts of London. As Penny Hebgin-Barnes’ recent CVMA volume (The Medieval Stained Glass of Lancashire) reveals, he seems to have removed some of the original sixteenth-century glass during the course of this work for subsequent re-use elsewhere (see Vidimus 29, May 2009).

In 1840, Willement joined the famous gothic architect and designer A.W.N. Pugin (1812–1852), to make the east window of the Convent of Our Lady of Mercy, Handsworth, Birmingham. The relationship foundered after Pugin complained in 1842: ‘I believe that Willement thinks only of making money … I will never work with Willement again for I have had immense trouble drawn everything out in detail and then at the last he charges twice as much as anybody’.

In 1842, Willement worked on the restoration of the Temple Church in London and later the church of the round church of the Holy Sepulchre, Cambridge, which had been restored between 1841–43 by the architect Anthony Salvin (1799–1881). In 1845, he purchased Davington Priory, Faversham (Kent), and in the same year also painted the ceiling of the Chapter House at York Minster and the vault of the Lady Chapel of Wells Cathedral. Additionally, he re-leaded the centre window of the Lady Chapel and provided several new figures of prophets. Willement’s prolific output continued into the 1850s and 1860s, including for St Luke’s, Chelsea; St Lawrence’s, Ludlow (Shropshire); the continuation of the work at St George’s Chapel, Windsor; and other windows and painted decoration at Windsor Castle. His last commission, at the royal chapel of the Savoy, London, was completed in 1865. He died on 10 March 1871 at Davington Priory.

An extended version of the book – A Chronological List of the Principal Works in Stained Glass Designed and Executed by Thomas Willement of London FSA from the Year 1812 to 1865 Inclusive – can be found in the British Library, BL., Add. MS 52413.

S.A. Shepherd, ‘Willement, Thomas (1786–1871)’, Oxford Dictionary of National Biography, Oxford, 2004.  We are indebted to Dr Shepherd’s entry for the compiling of this item.

H.T. Kirby, ‘Thomas Willement: an Heraldic Artist’s Note Book’, Apollo, Vol. 43 (1946), pp. 47–48
H.T. Kirby, ‘Thomas Willement: an Heraldic Artist’s Note Book’, BSMGP Journal, Vol. 9, No. 4 (1946) pp. 127–33
M. Harrison, Victorian Stained Glass (1980)
T. Willement, Regal Heraldry: the Armorial Insignia of the Kings and Queens of England, from Coeval Authorities (1821)
T. Willement, Heraldic Notices of Canterbury Cathedral; with Genealogical and Topographical Notes (1827)
T. Willement, Facsimile of a contemporary roll with the names and the arms of the sovereign and of the spiritual and temporal peers who sat in parliament held at Westminster AD1515 (1829)
T. Willement, A Roll of Arms of the Reign of Richard the Second (1834)
T. Willement, An account of the restorations of the collegiate chapel of St George, Windsor, with some particulars of the heraldic ornaments of the edifice (1844)

Regular readers will remember the fascinating article by Geoffrey Lane and Gordon Plumb on the musical score by the French-Flemish renaissance composer, Orlande de Lassus (c.1530–1594), depicted in the east window of St Helen, Denton in Wharfedale, (Yorkshire) [see Vidimus, June 2010 (no. 41)]. 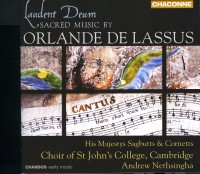 Recently Chandos Records contacted Gordon Plumb to ask if they could reproduce a detail from one of photographs of Denton for the cover of a new CD, recorded by the choir of St John’s College Cambridge under the English choral conductor Andrew Nethsingha (b. 1968). The choir is accompanied by His Majesty’s Sagbutts & Cornetts, a group of virtuoso wind players specialising in authentic styles on original instruments. The recording has now appeared (CHAN 0778) and features a performance of the Lassus motet whose score is depicted in the Denton window. Gordon says the music is superb!

The 2011 conference of the British Archaeological Association will be held in Kraków, the capital of Poland. The conference, which runs 3–7 July, will be based at the Jagiellonian Library. It will be concerned with the medieval art, architecture and archaeology of Kraków and the Lesser Poland region, as well the cultural and artistic links that bound the Polish kingdom to its central European neighbours. The programme will include lectures on Romanesque and Gothic archaeology, architecture, sculpture and painting as well as touching on the reception of medieval art in post-Reformation times. Delegates will visit the archaeological museum on Wawel royal hill as well as the newly opened archaeological exhibition under the Old Town Market, the cathedral and other medieval churches in Kraków and the Kazimierz district, and the medieval town of Sandomierz. 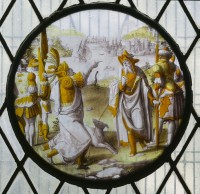 This month’s puzzle comes from the parish church of St Mary in Shrewsbury [Fig. 5]. It shows a group of men standing by the shore with ships and buildings in the background. The central characters are framed by soldiers looking away from them. They include a man in a plumed helmet pointing to another who wears a breastplate below his cloak. A dog lies at the feet of the pointing man.

The roundel measures 25.5cm and includes several shades of silver stain, including lemon. It has been dated to c.1550. What subject does it depict?

Roundels and other single panels of this period typically depict a range of subjects, including stories from the Old and New Testaments, the lives of saints, and tales from ancient history and classical literature, such as Homer’s Odyssey. Moral themes can also appear.

The solution can be found at the foot of this month’s Books section.

7–9 September: Society of Glass Technology, Annual Conference, Oxford. The conference will include a paper by Alun Adams of Swansea Metropolitan University on Celtic Studios, and a tour of Oxford stained glass by Paul Sancasciani FMGP. For further information on the SGT conference contact Dr David Martlew at  david.martlew@gmail.com

26–28 September:  CVMA Forum for the Conservation of Stained-Glass Windows Forum on Stained Glass after 1920: technology and conservation in Lisbon. More details are available here.

Until 15 May: Stories to Watch: Narrative in Medieval Manuscripts at the J. Paul Getty Museum, the Getty Center, Los Angeles, USA. For more details, visit the Getty’s website.

Until 3 July: Brian Clarke, Life and Death at the VitroMusée, Romont, Switzerland. For more details, visit the museum’s website.

Until 5 August: Treasures of Heaven: Saints, Relics, and Devotion in Medieval Europe at the Walters Art Museum, Baltimore. For more details, visit the museum’s website.

From 23 June 2011 – 10 September: Treasures of Heaven: Saints, Relics, and Devotion in Medieval Europe, at the British Museum, London. For more details, visit the museum’s website.