A Fifteenth-century Noli Me Tangere from Barcelona Cathedral

Silvia Cañellas, co-author of two Corpus Vitrearum (Catalonia) volumes, has published many articles on stained glass in Catalonia. She completed her first degree in geography and history in 1981 and her second in the history of art in 1988 at the University of Barcelona. For her doctorate (awarded in 1992) she studied the stained glass windows of Barcelona Cathedral. 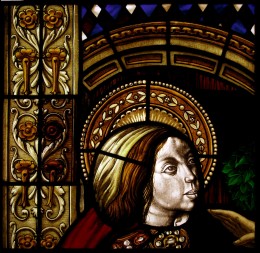 Introduction
Of the ten windows in the west façade of Barcelona Cathedral, recently conserved by the studios of Fernando Cortés and Teodoro Fort, only one is medieval. It was made in 1495 by the Catalan master glazier Gil Fontanet, following a design (or vidimus) by the Spanish painter Bartolomé Bermejo. It is an extraordinarily important survival, being the only extant window which can be confidently attributed to Fontanet. It demonstrates the way in which glaziers collaborated with easel painters and the introduction of Renaissance forms into Catalonian glass-painting.

Description
The panel shows the beautifully modelled head of Mary Magdalene. She has an ornamented halo and is richly clothed in a red cloak fastened by a jewelled brooch. She is positioned before an architectural column delicately painted with Renaissance-style motifs. To the right of the panel an outstretched hand may be seen, reaching towards her.

The Iconography
The panel comes from a window which represents a biblical scene known as ‘Noli Me Tangere’ (‘do not touch me’) [Fig. 2]. The risen Christ appeared to Mary Magdalene in a garden. She was weeping because she had found his tomb empty, and mistook him for the gardener until he spoke to her. He said to her ‘Touch me not; for I am not yet ascended to my Father: but go to my brethren, and say unto them, I ascend unto my Father, and your Father; and to my God, and your God.’ (New Testament, John XX, 17).

Fig. 2. The Noli Me Tangere window at Barcelona Cathedral

This scene was a popular subject for Renaissance painters, who captured the moment at which Christ reached out to prevent Mary Magdalene touching him. Here, Christ’s hand extends through the central mullion of the window.  The image is one which heralds the adoption of early Renaissance styles. Its composition, occupying the whole window opening and allowing the two figures to communicate across the central mullion, was an innovation in Catalonian stained glass of this period. The figures themselves are three-dimensional and the draperies and foliage are delicately executed. The image also includes Italian-influenced architectural motifs decorated with grotesques which, as we’ll see below, may be a later addition.

The window illuminated the cathedral’s baptistery and replaced an earlier window of the Baptism of Christ. The Noli Me Tangere scene creates a link between the Baptism and the Resurrection. Baptism was understood to cleanse one’s soul of original sin and to mark one’s acceptance of faith. The Resurrection was the confirmation of Christ as God and of his promise of eternal life through faith and the renunciation of sin. This topic is reinforced here by the presence of background foliage with spikes and stalks among stones, which are generally associated with the symbols of the Eucharist.

The window was made by Gil Fontanet (born c.1455 in Ivorra, Lleida), the first of several generations of glaziers who were to dominate the craft in Catalonia for a century. The work of the Fontanet family is well documented between 1472 and 1581, with over 250 archival records relating to the Fontanets surviving. Gil’s business (documented 1477–1527) was first continued by his brother Jaume (doc. 1497–1538) and then by Jaume’s son, also called Jaume (doc. 1528–1577). Elisabeth (doc. 1581–87), the second Jaume’s daughter, took charge of the family firm, and finally her own daughter, Elisabet Margarola, finished the last commissions and closed the workshop in 1587. They worked for many churches and institutional buildings in cities and towns all over Catalonia (including Barcelona, Girona, Tarragona, Lleida and Vic), doing restoration work as well as making new windows.
Although the Fontanet workshop was highly productive, very few of its windows have survived, most being known only from documents. Until 1937, Barcelona Cathedral was home to another of Gil Fontanet’s creations; the Four Evangelists window, made in 1513–15 in collaboration with the painter Pedro Nunyez, was destroyed in an explosion in 1937. 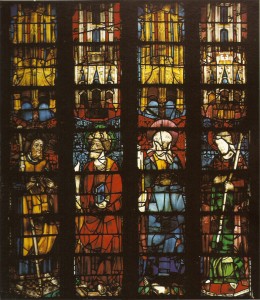 The Fontanet family effected the transition from a Gothic-Flemish style of glass-painting to one based on Renaissance forms. This transition did not derive from direct knowledge of Italian models, but from contact with local artists, whose work they observed and whose forms and motifs they adopted. The significance of the Noli Me Tangere window – still apparent, despite successive alterations to the glass since its installation – lies in its demonstration of the introduction of the Renaissance style into Catalan stained glass. The extent of this development can be appreciated by comparing the glass with a window produced earlier in the century at Girona Cathedral [Fig. 3].

The Designer
The window, commissioned by the chapter of Barcelona Cathedral, marked Gil Fontanet’s first collaboration with the artist Bartolomé Bermejo (b. 1440 in Córdoba), who designed it. Bermejo, a well-known painter of the time, travelled widely (Valencia, Aragón, Barcelona, and probably the Lowlands) and his known works are dispersed among several countries. He lived in Catalonia from 1486 onwards. In 1500–1501, Fontanet and Bermejo worked together again, producing windows for the Trades Hall of Barcelona on a commission from the Consulate of the Sea.

One of Bermejo’s most important canvas paintings is the Pietat Desplà (1490, Museu Nacional d’Art de Catalunya), which demonstrates his own Flemish style. If we compare this work with the Noli Me Tangere window, executed just a few years later, we can see a clear move towards a more Italian-influenced Renaissance style. This may be due to the alterations made by Gil Fontanet to Bermejo’s original design.

History of the Window
The documents show that Gil Fontanet was restoring his window as early as 1507. His brother carried out further work on the window in 1527 and 1532, including changes to the architectural detailing and inscription.  It is likely that he was responsible for introducing the Renaissance motifs. During the seventeenth century, when the French army besieged Barcelona, much of the principal façade was destroyed. Fortunately, the Noli Me Tangere window had been removed, probably for safe-keeping, and survived. Neither another war (in 1717), nor a bomb blast (in 1937), could destroy this window, though its history is full of repairs. A summary of the window’s history can be found in the notes at the end of this article.

The window is now located in a nineteenth-century facade. The construction of the west wall of the cathedral had been left unfinished in the fifteenth century. It was not until 1888–1899 that the new facade was executed, funded by the Catalan banker Manuel Girona i Agrafel. The Noli Me Tangere, the only surviving medieval window from this part of the cathedral, was incorporated in the new facade, surrounded by neo-Gothic windows.

Around this time a radical restoration was carried out by the firm Amigó, accounting for many of the details we see in the window today. All the panels were re-leaded and many pieces of glass replaced by new infills, perhaps because they were lost or badly damaged. It is likely that the architectural motifs in the left-hand lancet were reconstructed at this time. The arch and the column, with their Italian-influenced grotesques, are completely nineteenth century in origin. It is likely that Amigó was preserving those Renaissance features thought to have been introduced by Jaume Fontanet in the early sixteenth century. The medieval lozenge motifs at the heads of the lancets were extended down to just above the two figures. Amigó probably also added the decorative and colourful panels at the bottom of the window. These panels, in the typical style of the Catalan Modernism, are composed of bullions and cathedral glass. Finally, some anatomical anomalies, like Christ’s left arm, as well as some strident new glass painting, are also noticeable. These may date from the intervention carried out by Rigalt in 1927.

Conservation of the window
Before its recent conservation, there were thick layers of different dirt deposits on both sides of the glass [Figs 4 and 5]. The lead net was not stable and the ferramenta (supporting ironwork) showed signs of advanced oxidation. While some thirteenth-century red glass fragments inserted in the tracery lights bore the effects of corrosion, the original fifteenth-century glass was not corroded at all. This is probably due to the typical soda-lime composition of Catalonian glass of the fourteenth and fifteenth centuries. Chemical analysis reveals high levels of sodium, instead of potash, which makes glass very resistant to weathering.

The biggest conservation challenge, however, was how to deal with the aesthetic alterations suffered by the window as a result of previous interventions. These (especially those carried out by Amigó, as described above) had transformed its original integrity and seriously hindered its study. We decided to preserve all the valuable and relevant additions from the past, while trying to improve the legibility – and thus the appreciation – of the scene. Since we did not have any documentation on the likely changes from the original design, no element of the composition was altered and only a few pieces of glass were replaced by new minor infills, better integrated with the whole [Fig. 6]. 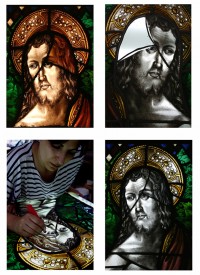 Fig. 6. Adding an infill to the head of Christ.

We were aiming to soften, within the limits of our professional ethics, the harshest effects of previous interventions, while retaining all traces of the window’s past history. The nineteenth-century lead net was fully preserved while the iron elements were replaced by non-ferrous metals. The window, along with all of those in the main facade of the cathedral, is now protected by new isothermal glazing.

Notes
The history of the window is well documented. So far, more than twenty documents, dating from the fifteenth to the twentieth centuries, have been found. They reveal the most significant interventions, which can be summarized as follows:
1507: Gil Fontanet, the glazier himself, repairs the window
1527 and 1532: Jaume Fontanet (Gil’s brother) restored the window twice. In 1527, he took out the window, replaced some glass and reorganized part of the design of the window. It was probably then that he added (or changed) both the architectural structures (arch and pillar in the left lancet) and the lower text that we can see today.
1591: Joan Jordà inserted a new piece of glass and fully releaded two panels in the window.
1668: the master glazier Isidre Julià was responsible for a new repair.
1680: the architect Miquel Rossell was working in the wall around the window.
During the French siege of Barcelona (1697), the window was again taken out and put back in place in 1698.
1698: the master glazier Francesc Saladriga was responsible for its restoration and installation.
1717: the blacksmith Josep Carbonell was working on its protective ironwork.
1837 and 1841: the glazier Josep Noguera replaced some glass and the window was reinforced with bitumen.
1888–1899: during the erection of the new main facade, the firm Amigó restored the window several times, adding two new panels at the bottom.
1927: the Rigalt workshop did some restoration work on the window.
After the Spanish Civil War (1936–39) the window was once more cleaned and repaired.

Unless otherwise stated all images are copyright of Fernando Cortés Pizano.