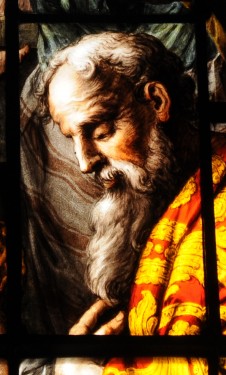 Fig. 1. The face of the kneeling king

This month’s panel [Fig. 1] comes from the ‘east’ window of Sir William Turner’s Hospital Chapel, in Kirkleatham, near Redcar.  Painted in 1742, the window’s central light depicts the scene of the Adoration of the Magi. It bears striking similarities to a window of the same subject at the church of St Michael in Great Witley, shedding light on the context and creator of the window at Kirkleatham.

Description of Panel
The panel shows the face, hand and a small section of the robes of one of the adoring kings, bearded with eyes downcast.  The figure is dressed in robes of vibrant yellow and red, these colours contrasting with the muted tones of the robes framing the face, as worn by the figure standing behind.  The king’s face is delicately and realistically rendered in enamel colours, the flesh tones and shading exquisitely painted.
The panel is from the central light of the window, measuring 2845mm by 1220mm, and made of flat glass approximately 3mm thick.  The majority of the window is white (uncoloured) glass, but sections of blue, green and purple pot metal and flashed ruby glass are included.  Leaded with 8mm and 10mm flat section lead, the lead net is predominately rectilinear and highly regular, the pattern deviated from in the areas where pot-metal glass is included or where faces are unobstructed.  The glass is painted with iron oxide glass-paint, yellow (silver) stain, a deep ruby red stain, and enamel colours in blue, purple, pale green and pink and is set into a wooden frame, which may be original to the window.

The Adoration of the Magi Window
The panel is part of the liturgical east window [Fig. 2] of Sir William Turner’s Hospital chapel in Kirkleatham, near Redcar.  Venetian in format, the window is physically south facing, and dates from the 1742 remodelling of the Hospital, carried out by Sir William Turner’s nephew, Cholmley Turner.  The window depicts a scene of the Adoration of the Magi, flanked on the right by a portrait of the founder of the Hospital, Sir William, and on the left by his elder brother John Turner. 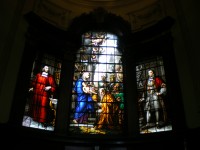 Exquisitely rendered and cleverly designed, the central light’s [Fig. 3] largely pictorial scene, un-obscured by the rigid lead structure, portrays the Magi offering their gifts to the infant Christ, attended by angels and shepherds, the figures of which can be seen in the background.  The figures of Mary and the Magi are depicted in bold colours, the palette increasingly muted towards the higher panels of the window.  Interesting architectural elements are depicted; the dome, obelisk and seemingly ionic structure contrast with the wooden barn-like construction, the transition between the different buildings emphasised by a vertical column.  An attractive composition, the expanse of pale blue background, unbroken by the arms of the king who holds his gift aloft and to the right, along with the diagonal line of the star, help to establish the infant Christ as the focus.

Turner’s Hospital and James Gibbs
Built originally between 1674 and 1676, the Hospital was set up as a charitable institution offering accommodation and social service – an almshouse and a charity school.  Founded by Sir William Turner, a merchant, magistrate and councillor in the City who held the position of Mayor of London in 1668, the Hospital at Kirkleatham provided for the care of ten old men, ten old women, and the education of ten boys and ten girl, linking the relief of poverty to a sense of charitable responsibility. 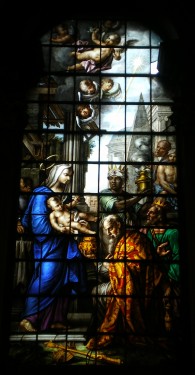 Fig. 3. The Adoration of the Magi, Turner's Hospital

Although located in Kirkleatham, near Redcar, the Hospital enjoyed links with London, through its founder Sir William Turner and his nephew Cholmley Turner.  The architect for the chapel at Turner’s Hospital is undocumented but it is likely that James Gibbs (1682-1754) was responsible for much of the design.  As outlined by Terry Friedman, Gibbs worked with Cholmley Turner in 1728, on his mansion at Kirkleatham and again in 1739 when he designed the Turner Mausoleum at the nearby church of St Cuthbert.  It is probable that he was also involved with the construction of the chapel.

As Michael Archer has suggested, decorative elements in the chapel provide further links to James Gibbs, and shed light on the authorship of the stained glass window it contains.  A giltwood chandelier and a pair of gilt gesso chairs, which until recently were both located in the chapel, were acquired by Cholmley Turner for his chapel at auction in 1747 from Cannons, the Duke of Chandos’s estate in Middlesex, when it was demolished and all the effects auctioned off.  Gibbs had produced designs for Cannons in 1716, and while it is unclear how responsible he was for the resulting estate, he designed its chapel (1716-1721) and probably influenced the design of the chairs eventually bought by Cholmley Turner.  It may even be that Cholmley Turner bought these decorative pieces on Gibbs’ advice, but at the very least, their purchase for the chapel at Turner’s Hospital signals the architect’s influence within this building.

The connection between the chapel at Turner’s Hospital and Cannons is strengthened by consideration of the church of St Michael, Great Witley, Worcestershire.  Built for Lord Foley between 1733 and 1735, the church also features decorative elements acquired from Cannons in the1747 auction.  Gibbs himself was appointed to embellish the interior at Great Witley, and commissioned to incorporate the baroque interior from the chapel at Cannons into the Worcestershire church.  The most important of Lord Foley’s acquisitions from Cannons are ten stained glass windows, including an Adoration of the Magi scene [Fig. 4], crucial for ascertaining the creator of the window at Turner’s Hospital.

William Price the Younger as the Artist
Painted between 1719 and 1721, the windows originally installed at Cannons are the work of glass-painter Joshua Price (c.1672-1722), the Adoration of the Magi window bearing the signature ‘J.S Price 1719.’  Striking similarities between this window and the central light of the window at Turner’s Hospital (compare Fig. 3 and Fig. 4) establish a relationship between the two.  It is most likely that the Kirkleatham window was produced by Joshua’s son, William Price the Younger (1703 or 1707-1756), who, as Archer notes, later mentioned Tuner’s Hospital amongst a number of buildings where he had worked.

Fig. 4. The Adoration of the Magi, Great Witley

James Gibbs and Joshua Price, both working at Cannons, would have had at the very least a degree of contact.  It is not unfeasible that Gibbs recommended the glass-painter’s son William to Cholmley Turner for the east window commission at Kirkleatham, which was clearly based on the Cannons design executed by Joshua Price.  Michael Archer notes that William the Younger was responsible for the glazing of St Bartholomew’s in 1743, and Michael Bevington suggests the glass-painter was involved at the Gothic Temple in Stowe in 1747.  Both buildings were designed by Gibbs, so it is also probable that William the Younger was known to the architect in his own right.  Ultimately, since it is unlikely to have been mere chance that drove Cholmley Turner to choose a Cannons design for the glass at Turner’s Hospital, and would be a bizarre coincidence in light of his other Cannons acquisitions, the influence of Gibbs is clear, as is the probability that he recommended William the Younger, whose family connections and artistic capabilities were strong, for the commission at Kirkleatham.

The scene depicted at Turner’s Hospital is based on an inverted version of the Cannons window.  In addition to the compositional parallels between the two designs, the windows are of similar construction.  Each has a semicircular arch over and is made up of enamel painted square panels of glass and smaller sections of pot metal glass.  However, while William Price the Younger worked in a similar fashion to his father, the window at Turner’s Hospital cannot simply be seen as a direct, albeit reversed, copy of Joshua Price’s design.  Quite apart from the difference in size (Joshua Price’s window as it measures today at Great Witley is approximately 1300mm taller and 280mm wider), the windows are not identical.

William Price appears to have inherited his father’s cartoons. It is likely that these were sketches of images to be depicted.  Although forming the basis for the designs to be rendered in glass, the cartoons were adaptable, unlike those used in medieval stained glass production which presented a specific, prearranged cutline of the window – to scale – upon which glass could be laid out and delineated.  Adaptation of a sketch or cartoon is evident at Turner’s Hospital; it is most unlikely that anyone other than William Price the Younger would have had access to his father Joshua’s cartoon, and he has not merely reused the design, but has modified and amended it to fit a different setting, and in a different building.

To dismiss the window at Turner’s Hospital as a copy of the window by Joshua Price is to undervalue William the Younger’s work, both in terms of the considered alterations he makes to the lead net, to the design itself and the higher artistic quality with which it is executed.  As Archer notes, writing in 1757, Walpole acknowledged William Price the Younger as an artist “whose colours are fine, whose drawing good, and whose taste in ornaments and mosaic…is far superior to any of his predecessors, is equal to the antique, to the good Italian masters, and only surpassed by his own singular modesty.”  These merits are evident in his glass at Turner’s Hospital, the details and composition of the scene painted in a more realistic, skilled and sophisticated manner than in the glass originally intended for Cannons, and in his portraits of John and William Turner – a testament to his talent.