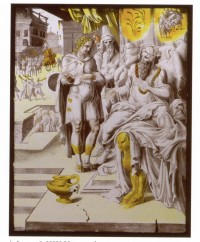 With the publication of this splendid volume, weighing in at over 4½ kilos, Berserik and Caen complete the second stage of their comprehensive survey of roundels in the Low Countries, focusing on the southern (Belgian) provinces of East and West Flanders, and especially the cities of Ghent and Bruges. As regular readers will know, the CVMA (Corpus Vitrearum Medii Aevi) was prompted by the grievous losses of historic stained glass in the Second World War. These volumes however also reflect earlier losses, in the eighteenth and early nineteenth centuries, when antiquarian collectors in the British Isles and elsewhere developed a voracious appetite for these small-scale glass-paintings, on single panes of glass. (They come in a variety of shapes, square, rectangular, round and oval, but ‘roundel’ is generally accepted as a shorthand term.) They had been produced in vast numbers in sixteenth and seventeenth centuries, but had fallen out of fashion for domestic display; many more came on the market when religious houses were suppressed during the Napoleonic era.

Relatively few survive in their lands of origin, distributed amongst a variety of museums and private collections, and a simple checklist would be unimpressive. But here they are set wherever possible in a broader context of related material – other roundels at home and abroad, the prints from which they derived, and even the drawings on which the prints themselves were based. The copious illustrations are mostly in colour and beautifully reproduced. Some of the finest examples are from the Bijloke Collection in Ghent City Museum (STAM). They include a sequence of six late-sixteenth century panels with scenes from the Life of Joseph, by an unknown workshop using prints by Dirck Volkertsz. Coornhert after drawings by Martin van Heemskerck. Joseph finding the cup in his brother Benjamin’s sack and Joseph interpreting Pharoah’s dream [Fig. 1] are reunited with their print sources and linked to similar roundels in Brussels, the second also to examples at Packwood House (Warwickshire) and at King’s College (Cambridge); another has counterparts at Packwood and in Glynde Church (Sussex). 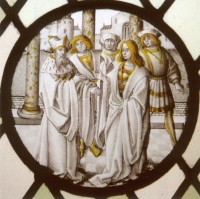 Similarly in Bruges, two roundels on the parable of the Prodigal Son [Fig. 2] are the starting-point for a journey that takes in five related panels in Utrecht, two each at Muncaster Castle (Cumbria) and at a church near Dublin, as well as single items at museums in London, New York, Cologne and Paris. The Bruges Prodigal Son roundels form part of a collection of forty-one pieces assembled by Baron van der Elst and installed in his home, now a guest house run by the artist David de Graef. Although not in their original locations, they are at least displayed in a domestic setting, rather than in a church, as they so often are in Britain.

In this connection it is particularly pleasing to see examples of roundels still in their original settings, framed by exuberant Renaissance decoration and accompanied by explanatory captions. [Fig. 3] Very few of those that went abroad still have their settings with them. The roundel illustrated here, one of a pair of Allegories on Justice, is given the attribution ‘Southern Low Countries, Antwerp, circle of Pieter Coecke van Aelst’, a reminder that despite the intense scholarship now devoted to these fascinating objects, the artists who made them remain largely unidentified. In some cases their subject matter is also in doubt – providing fresh candidates for the regular Vidimus ‘Name that Roundel’ quiz: does a particular group of men against a marine background represent a Biblical scene or perhaps an episode from the Iliad? 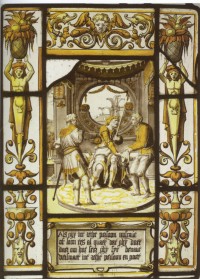 The examples reproduced here are from the sixteenth century, and are in dark paint and yellow stain. It is hard to resist the impression that this was, almost literally, the golden age of roundel production. Later roundels, in which an increasing range of enamels was used, often show a falling-off in artistic quality, though Berserik and Caen themselves avoid such value judgments. 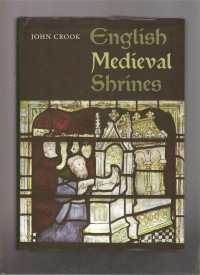 This book will be warmly welcomed by readers with a specialist interest in medieval shrines, their origins, locations, associated ceremonies, designs, and fates. Dr Crook is the foremost authority on the subject, and this volume amply shows why. [Fig. 4]  The book is available from the publisher here.

After describing the importance of saints and their relics to medieval Christians, the author explains how the Greek tradition of dismembering the remains of saints and distributing their body parts triumphed over Roman revulsion against disturbing the dead. Thereafter he charts the history of shrines in England from their Anglo-Saxon origins to the last great event before their eventual destruction during the Reformation – the translation of St Swithun’s remains to a new shrine in Winchester Cathedral as late as 1476.

In-depth accounts of shrines at Canterbury, Westminster, Durham, York, Worcester, Oxford, Salisbury and Winchester reveal changing patterns of interaction and practice. The evolution of the architecture of shrines from the foramina type (from foramen, the Latin word for opening) – with small port holes cut into the sides of the tomb, into which pilgrims could get closer to relics – to grander architectural structures is carefully discussed. Examples of the contrasting styles include Becket’s foramina shrine at Canterbury Cathedral and St William’s shrine at York Minister, both of which are depicted in contemporary stained glass. The text is enlivened by contemporary accounts of how bodies were exhumed, the sweet odours that filled churches when coffins were opened, and how and where the shrines were sited.

A chapter discussing the reconstruction of eight shrines destroyed during the Reformation from fragments recovered from different sources provides fascinating insights into how they would appeared to medieval supplicants seeking cures and help. 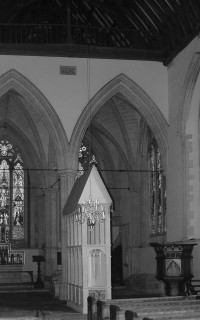 For stained-glass historians the book provides an interesting background account of the thirteenth-century windows depicting incidents in the life of St Birinus at the Augustinian Abbey of St Peter and St Paul, Dorchester (Oxfordshire). As the author explains, the canons said in 1224 that they had discovered the tomb of this seventh-century missionary at their church, a ‘bold claim contradicting Bede’s statement that the saint’s body had been taken to Winchester in AD 676’. The Dorchester canons countered this statement and other accounts that said the same, by retorting that earlier chroniclers had been mistaken, and that the body in Winchester was in fact that of a local worthy called ‘Bertinus’, whose name had been confused with Birinus. When a tomb was opened revealing a bishop in pontificals and a local hermit heard a heavenly voice saying that it was Birinus, the canons triumphed. Stained glass windows celebrating the saint were installed in the church, and in the early fourteenth century a shrine was built, parts of which survive in a modern reconstruction. [Figs 5 and 6]

A discussion of shrines at Evesham Abbey (Worcestershire) contains further valuable information, namely that a thirteenth-shrine of St Ecgwine, an Anglo-Saxon bishop and founder of the abbey, was complemented by a window of the same date in the presbytery portraying his story.

For more information about the author’s publications visit his website.