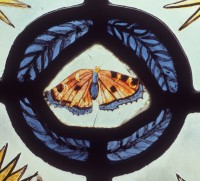 The World Monuments Fund Britain is holding an important symposium on medieval stained glass at Strawberry Hill House on Thursday, 10 May, 10am – 4pm. Speakers including Heather Gilderdale (independent scholar, specialist on the work of John Thornton) and Jim Cheshire (University of Lincoln Conservation Department) will speak about the cleaning, cataloguing and potential re-use of thousands of fragments of glass, dating mostly to the fifteenth century, but also as late as the nineteenth century, from the war damaged Coventry Cathedral. Leonie Seliger (head of stained glass conservation at Canterbury Cathedral) will speak about the conservation of two panels dating to c.1200 at the cathedral. Michael Peover (glass consultant at Strawberry Hill and former librarian of the British Society of Master Glass Painters) will speak about the repair, cleaning and protection of sixteenth- and seventeenth-century panels, mainly of Netherlandish origin, at Strawberry Hill House.

Lunch is provided and the day includes a tour of the house. Tickets for Vidimus readers are available at the discounted price of £60. For further details, email sarah@wmf.org.uk.

The CVMA (GB) Picture Archive contains many images of the glass at Strawberry Hill.

Peter Hemmel at the Getty Museum

The Getty Museum in Los Angeles, California, has acquired a painting, The Trinity with the Virgin, Sts John the Evangelist, Stephen and Lawrence and a Donor, dated 1479 and attributed to the acclaimed stained-glass artist Peter Hemmel von Andlau (c.1420/25 – after 1501). The altarpiece was devised for a donor, who is shown in the painting kneeling in prayer on the left, in diminutive scale, directing his pleas to the image of the Trinity – an immense and resplendently robed figure of God seated on a carved-stone throne with the crucified Christ and the Holy Spirit. The central figures are flanked by a grieving Virgin and St John the Evangelist. The presence of two important deacon saints, Stephen and Lawrence, confirms the clerical status of the donor. St Stephen, identified by the rocks with which he was martyred, looks protectively down at the donor and is presumed to be the donor’s namesake.

In the late Middle Ages, the city of Strasbourg (today in France), then as now a crossroads between German and French territories, was a thriving artistic centre as well as a bustling commercial hub. At least eight workshops provided patrons across the neighbouring regions with stained glass, panel paintings, wood and stone sculpture, and engravings. The Strasbourg workshop co-operative (Straßburger Werkstattgemeinschaft) was an extraordinary partnership was formed for a period of four years (c.1477–81) between five of Strasbourg’s leading independent workshops of glass-painters, headed by Peter Hemmel von Andlau (c.1420/25 – after 1501), Lienhart Spitznagel, Hans von Maursmünster (fl. 1475–1503), Theobald von Lixheim (d. before 1507), and Werner Störe, to co-operate in the production of large and important stained-glass commissions. Distinguished by high-quality and nuanced painting, individualized figures, and brilliant use of colour, the signature manner of the co-operative reflects the direct influences of leading contemporary Upper Rhine painters and engravers, notably the Master of the Karlsruhe Passion (fl. 1435–65), the Master E.S. (fl. 1450–67), and Martin Schongauer (c.1435 – 1491), as well as the elegant naturalism of the Netherlandish painters Rogier van der Weyden (c.1399 – 1464) and Dieric Bouts (c.1415 – 1475). The co-operative produced an astonishing amount of large- and small-scale stained glass for churches in Tübingen (the Stiftskirche), Ulm (the minster), Nuremberg (the St.-Lorenzkirche), Salzburg (the Nonnberg Convent), Munich (the Liebfrauenkirche), and many other cities.

Peter Hemmel, generally considered one of the most extraordinary glass-painters of the late fifteenth century, was a senior member of the Strasbourg workshop co-operative. Although no panel paintings have previously been ascribed to Hemmel himself convincingly, The Trinity shows affinities with the sophisticated stained-glass projects attributed to him. Hemmel’s work has often been associated with bold, saturated fields of colour, notably purple, that create a glowing, jewel-like effect, which is one of the outstanding features of the present painting. The painting also features the elegant, individualized and dynamic figures associated with the artist.

The painting has joined the other masterpieces of German Gothic art in the Getty collection, which include stained glass. 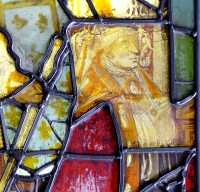 Four panels of sixteenth-century stained glass from Steinfeld Abbey discovered at the parish church of St Cadoc in Glynneath, south Wales, in 2010, have been reinstated in the church after being cleaned by experts from The Glass House in Chester. [Fig. 1] The conservation of the windows was part of a much larger heritage project at this historic church.

The panels were painted between 1530 and 1542 and show abbots and monks being presented to or by saints. For earlier reports on this story, see Vidimus issues 34 and 35.

The first half of the seventeenth century saw a significant revival of glass-painting, related to new thinking concerning the appropriate way to adorn a church, in a desire to create the ‘beauty of holiness’. An important weekend course on this subject will be held in Oxford in May.

Organized by the University’s Department for Continuing Education in association with the Ecclesiological Society and the Stained Glass Research Centre at the University of York, the course will include lectures by art and architectural historians, religious historians, and conservation experts. There will also be guided visits to key Oxford Colleges. Artists whose work survives in the city include the Emden-born painters Bernard and Abraham van Linge, as well as English figures such as Richard Greenbury.

The course takes place between Friday 11 May and Sunday 13 May 2012 at Rewley House, Wellington Square, Oxford. Further information, including details of fees and the programme, can be found here. 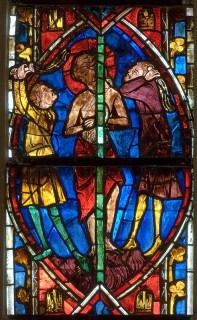 Fig. 1. The Flagellation, Tours Cathedral: one of many superb photographs of medieval stained glass by Dr Watling that feature in his thesis.

Dr Stuart Watling of the Courtauld Institute of Art has posted his doctoral thesis – ‘Narrative art in northern Europe, c.1140-1300: A narratological re-appraisal’ – complete with text and pictures on line here.

Much of this ground-breaking study concerns medieval stained glass.

Two workshops/masterclasses with the well-known stained-glass painter Jonathan Cooke will be held at the Swansea Architectural Glass Centre: 20–23 April, and 28 September – 1 October 2012.

The workshops, lasting three and a half days, are suitable both for beginners and for those with previous experience of glass-painting. Jonathan will demonstrate glass-painting using a technique whereby a number of layers of paint can be built up prior to firing. He will also discuss materials, tools, and firing schedules. During the workshop there will be ample time for participants to practice the technique and to produce samples.

In 2012 two additional two-day workshops will be run focusing specifically on the use of enamels and silver stain. These will take place from midday on 23 April to midday on 25 April, and on 1–3 October.