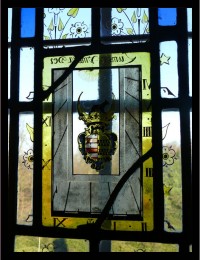 The Civil War and Commonwealth (1642–1660) were not the best of times for English glass-painting. Much surviving medieval glass was smashed by Parliamentary troops, and by fanatical iconoclasts such as the Parliamentary Visitor William Dowsing in East Anglia, and Richard Culmer in Kent. In London, Sir Robert Harley headed a committee of inquiry into monuments of superstition and idolatry, and a leading glass-painter of the day, Baptist Sutton (c.1600–1661), found himself trying to advise London churches on how to comply with its demands. 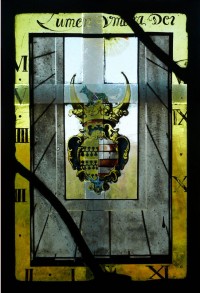 Yet glass-painting managed to survive into more favourable times, and even to recruit new practitioners, such as Richard Dutton (c.1636–86) and William Price (c.1644–1710) in London, and Henry Gyles (1645–1709) in York. One factor that came to their aid was a fashion for stained-glass sundials; these functioned much like vertical wall dials, but because they were transparent, their owners (at least on sunny days) could regulate their clocks without having to step outdoors. A considerable number survive from the mid-seventeenth century, and others continue to turn up. One that came to light only fairly recently, thanks to members of the British Sundial Society, is the Tyttenhall sundial, made for the mansion of that name in Hertfordshire, some 15 miles north of central London. [Figs 1 & 2] 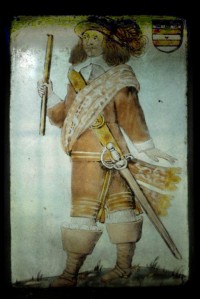 The Tyttenhanger dial was recorded in 1910 by the Royal Commission on Historic Monuments, but forgotten for the next 100 years, until it was rediscovered in 2010, awkwardly mounted back-to-front inside a north-facing window. [Fig. 1] For ease of study, one illustration here has been reversed, cropped and digitally enhanced to show details that would otherwise be hidden by the shadows of the glazing bars. [Fig. 2] The dial displays the arms of Sir Henry Blount and his wife Hester, née Wase. Lady Hester had previously been married to Sir William Mainwaring, a Royalist victim of the Civil War, who was killed in October 1645, during the siege of Chester, and is depicted on the celebrated window in the Church of St Chad at Farndon, Cheshire, set up about 1662 by William Barnston to commemorate his fallen fellow-officers. [Fig. 3] His young widow soon caught the eye of Blount, who married her in 1647. 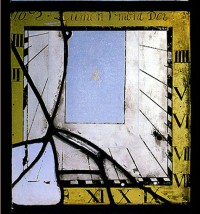 Unlike Mainwaring, Blount was a notorious survivor of the turmoil. A lawyer by training, and a celebrated travel-writer in his youth, he had been knighted in 1639, and fought for the King at Edgehill in 1642, but later switched to the Commonwealth side. In 1652, he was appointed by Cromwell to serve on a commission to reform the criminal code. The deaths of his father and elder brother left Sir Henry in full control of the family home at Tyttenhanger, a former residence of the abbots of St Albans, which he proceeded to demolish and rebuild around 1655. The new house, which Pevsner dated to c.1660, can be seen here.

Exactly when Blount commissioned his glass sundial is not known, but its nearest parallels seems date from about 1670. Like the house itself, the dial is designed to face slightly west of due south. It bears the Latin motto Lumen Umbra Dei (‘Light is the shadow of God’) in a distinctive cursive hand. The same motto, in what appears to be the same hand, occurs on dials at two strikingly similar houses built soon after the Restoration of the monarchy in 1660: a rectangular dial dated 1672 at Tredegar House, near Newport, South Wales [Fig. 4], and a quarry (diamond-shaped) dial at Groombridge Place, East Sussex [Fig. 5] – the latter one of a pair, its twin bearing the related motto Umbram Videt Umbra [Fig. 6]. The Groombridge dials have been attributed to the glass-painter John Oliver (1616/17–1701), from their marked affinity to a pair at Northill, Bedfordshire [Fig. 7], which date from 1664, when Oliver made a large armorial window for the church there. The dials were for the rectory: the first, inscribed in Oliver’s more formal hand, has his signature scratched in the matt [Fig. 8], but the second, perhaps intended for the rector’s wife, has an inscription in an informal hand similar to that at Tyttenhanger. Unfortunately, the two mottoes have scarcely a letter in common, but at least they show that Oliver was happy to vary his scripts. 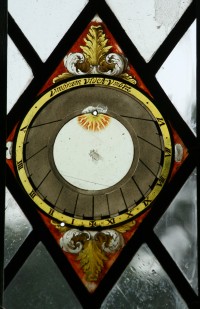 Fig. 7. John Oliver’s dials at Northill, Bedfordshire (1664); the gnomon of the left dial has been replaced on the wrong side of the glass. (photos © Mike Cowham)

If the Tredegar, Groombridge and Tyttenhanger dials are by John Oliver, they come from a period of upheaval in his personal life. Oliver’s home and workshop, at the junction of Great Trinity Lane and Little Trinity Lane, burned down in the Great Fire of 1666; it was more than a year before his plot was surveyed and he could begin to rebuild. Early in 1668, he joined the small team of city surveyors, working alongside Robert Hooke and Peter Mills, which led in turn to his appointment in 1675/6 as a member of Wren’s teams rebuilding the churches and St Paul’s Cathedral. Despite all this, Oliver seems to have kept up at least his small work during these years. His fellow-surveyor, Robert Hooke, recorded in his diary that he called on Oliver in December 1673, and ‘saw him paint glasse’.

Both the Tredegar and Tyttenhall dials have also been attributed to Henry Gyles, apparently on the grounds of their general appearance. This does not seem to be supported however by a detailed comparison with his Nun Appleton dial, which also dates from 1670. [Fig. 8] 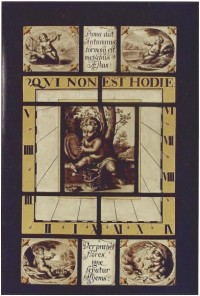 As is almost always the case, the hour-numbers are painted in black on a ring stained yellow, apparently in imitation of the polished brass chapter-rings of contemporary clocks. Inside this ring the hour-lines are painted on a matt surface (usually gray or white), designed to show up the shadow of the gnomon, a brass rod fitted on the outer side of the glass. At Nun Appleton, and in all the other dials most reliably attributed to him, Gyles consistently marked his half-hours with a line and a finial painted on the chapter-ring, whereas Oliver and other London makers usually painted a dot at this point and a shorter line on the inner matt field. Gyles also used a markedly different handwriting, full of scrolling flourishes. In any case, Gyles was near the start of his career in 1670, and his reputation is unlikely to have spread this far. Blount had no cause to seek out a relative unknown in distant York, when his old London haunts were within walking distance of at least two established glass-dial-makers, John Oliver in the city, and Richard Dutton (Sutton’s son-in-law) in Holborn. Philip Packer, who built Groombridge, was another London lawyer, and may have known Oliver through Christopher Wren. Even William Morgan, settled in south Wales, would probably have found it easier to shop in London than York.

Regrettably there is as yet no comprehensive book on stained-glass sundials, but nearly all the surviving examples can be studied on John Carmichael’s excellent website Stained Glass Sundials from around the World. The site also has links to numerous articles on related topics. For sundials generally, see the British Sundial Society.

The three Restoration-style houses featured in this article are described in the relevant volumes of Pevsner’s Buildings of England; each has its own website.

For conservation of the Nun Appleton dial, see Vidimus 16.