‘No artistic medium other than glass incorporates that fundamental element of plastic work – light – or works with it so intimately. This magical relationship has always been recognized by craftsmen and commissioners alike … glass-making technology, closely linked with fire as it is, was not without symbolic resonances.’ [1] 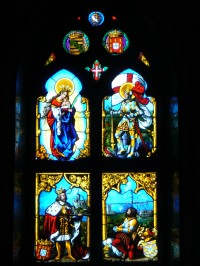 Ferdinand August Franz Anton (1816–1885) was born in Vienna, the son of Prince Ferdinand Georg August of Saxe-Coburg-Gotha (1785–1851) and Princess María Antónia Gabriela (1797–1862), daughter and heiress of Ferenc Jószef, Prince of Koháry, Lord of Csábrag and other lands in Hungary. On 1 January 1836, he married Mary II (1819–1853), Queen of Portugal, becoming king-consort under the name Fernando II. He would become king on the birth of his first son. Fernando’s interest in all matters aesthetic and artistic and his awareness of cultural heritage was to be unprecedented in Portuguese history.

At this point it ought to be mentioned that there is little evidence for the cultivation of stained glass as an art form in Portugal, let alone any concrete evidence for large quantities of extant glass – at least, not at the level of what was happening in other European regions, such as Germany, France, the Netherlands, Switzerland, or England. Commissions for stained-glass windows are however documented for several places, although these windows are no longer extant (assuming, that is, that these commissions were in fact carried out). The lack of such evidence may reflect contemporary taste and the fact that Gothic architecture in Portugal never exhibited an appetite for developing in height, thereby providing the requisite wall openings that could accommodate panels of coloured glass. 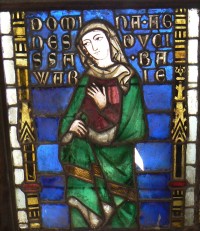 Redol notes the lack of material evidence and writings relating to stained glass in Portugal prior to the third decade of the fifteenth century, leading one to suppose that the medium, whose history stretches back several centuries further in central European regions, was unknown in Portugal before then.[2] Barros points out that it is not simply the lack of references and documents, or of stained-glass windows dating to before the fifteenth century from which it might be inferred that stained glass was not found in Portugal at earlier dates: the fragility of the medium itself – both the glass and the leads – may have contributed to the disappearance of examples from before the fifteenth century.[3] Barros further points to circumstantial evidence to explain the probable lack of stained glass in Portugal at the earlier period, believing that the requisite economic conditions – conducive to the construction of large-scale cathedrals or the creation of a favourable climate in which foreign craftsmen (perhaps too busy in their own countries with important commissions) might work – did not exist. In the present author’s view, these reasons may well explain why no significant evidence for the production of stained glass in Portuguese territory survives from the earlier period.

In light of these observations, the collection gathered by Fernando II becomes even more significant, especially if we consider its chronological range, embracing as it does glass from every single century from the fourteenth to the nineteenth. Moreover, it is worth stressing that the fact these stained-glass panels were brought to Portugal during the nineteenth century may be the only reason they were spared destruction during the Second World War. 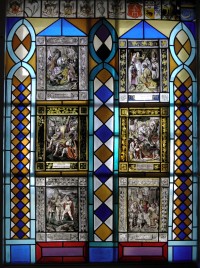 With the advent of Romanticism in the nineteenth century, and its fascination with the middle ages, not only were stained-glass panels produced on Gothic models, but an enormous number of panels from diverse periods were preserved by individuals engaged in collecting. The Pena National Palace, the famous Romanticist monument built by Fernando, houses a collection of stained glass that reflects both production and collecting activity in the nineteenth century. It is hoped that analysis of the collection, together with an inventory and an assessment of its condition, will highlight a truly unique part of Portugal’s cultural heritage and bring it to international attention. 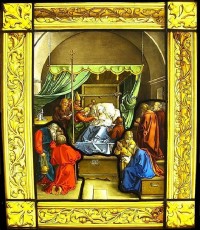 Fig. 4. Panel attributed to the Kellner workshop of Nuremberg.

The great hall glazing is composed of three series, corresponding to the three windows in the north façade of the central body of the building. These series are veritable patchworks of stained glass, and from analysis of the inscriptions, styles and production techniques it is clear that the panels belong to different periods and in most cases come from Germany, though some are of Swiss or Netherlandish provenance. The panels are very diverse in content: heraldry (found in all series, and in some cases also in the tracery); scenes from the life of Christ (Nativity, Baptism and Resurrection); eighteenth-century German scenes of everyday life; representations of birds and flowers; and historical episodes.

It is the glazing now found in the reserves that contains the largest proportion of medieval stained glass, and like the glazing of the great hall, the majority of it must have come from Germany and Switzerland, although the Netherlands are also represented. These panels were transferred to the Pena National Palace in the middle of the twentieth century from the Necessidades Palace in Lisbon, the permanent residence of King Fernando II.

Among these panels is one that is certainly the oldest in the whole collection, and probably the oldest stained glass in Portugal. According to Daniel Hess of the Germanisches Nationalmuseum in Nuremberg, who saw this panel in April 1995 at an international conference at the Batalha Monastery, it dates from the beginning of the fourteenth century. Inscribed ‘DOMINA AGNES DUCISSA BAWARIE’ (‘Lady Agnes, Duchess of Bavaria’), the panel is identical in format, composition and style to one in the Victoria & Albert Museum collection (acc. no. C.83-1919), inscribed ‘DOMINA AGNES UXOR SUA’ (‘Lady Agnes his wife’) which can be viewed here. These two panels, together with ten further panels in the Bayerisches Nationalmuseum in Munich, originally formed part of a large window in the chapel of St Afra in the Cistercian convent of Seligenthal, near Landshut (Niederbayern), founded in 1232 by Ludmilla, Duchess of Bavaria, after her husband, Ludwig I, was assassinated. The chapel was added in the early fourteenth century. The identities of the individuals represented in the panels in Sintra, London and Munich have not yet been fully established, but the ensemble must originally have constituted an imposing dynastic display. 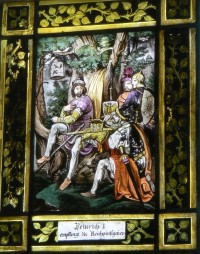 Despite the obvious diversity of the collection gathered by King Fernando II and the evident freedom of composition with which he wanted to organize its different components, the great hall glazing is simultaneously the most typical and the most puzzling aspect of the collection. While it is true that the themes represented in the different panels of the first window are perfectly intelligible and derived from known (quasi-)historical contexts, the same cannot be said about the other two windows.

Despite extensive investigation, the present author was unable to find examples of panels comparable in either aesthetic or technical terms to the six in the first window [Fig. 3]. This makes it very difficult to assign a provenance or a date to them. All the panels have the same monogram, an F superimposed on an H. The only parallel found with comparable format and frame was a panel that formerly featured on an art dealer’s website,[4] where authorship of the panel probably depicting the Death of the Virgin was attributed to the Kellner workshop in Nuremberg, which, as mentioned before, produced the nave window for the chapel in Pena National Palace [Fig. 4]. 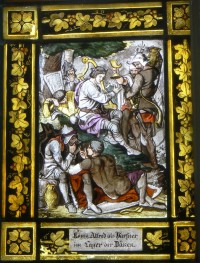 Fig. 6. Alfred the Great as harpist in the Danish camp.

The scenes depicted in the six large unipartite panels, three in each of the window’s two lights, that constitute the principal decoration of this window are based on (quasi)-historical events that would acquire legendary status. Each panel bears an inscription in German, and it is possible to identify the episodes, even in cases where some words have partly disappeared: top left ‘Wilhelm der Eroberer | König von England’ (‘William the Conqueror, King of England’); top right ‘[Die Kal]marische Union | […]eder 1397.’ (‘The Union of Kalmar … 1397’); centre left ‘Heinrich I | empfängt die Reichsinsignien’ (‘Heinrich I receives the royal insignia’); centre right ‘König Alfred als Harfner | im Lager der Däner’ (‘King Alfred as harpist in the Danes’ camp’); bottom left ‘Der Schweizerbund | im Rüttli. 1307.’ (‘The Swiss confederacy oath in Rütli, 1307’); bottom right ‘Teodorichs Triumph | in römischer Purpur’ (‘Theodoric’s triumph in Roman purple’). The choice of subject matter in the panels is most interesting. The upper and lower pairs each mark a political union and the rule of a ‘foreigner’ over another people. The two central panels – depicting Heinrich I, the Fowler (king of Germany 919–936) receiving the royal insignia [Fig. 5], and Alfred the Great (king of Wessex 871–899) playing Saxon ballads on his harp in the camp of the Danes [Fig. 6] – may suggest a thematic focus for the iconography. In addition to being near-contemporaries, these two Saxon kings men were pivotal in establishing the medieval structures of western Europe. The central positioning of these panels may indicate Fernando II’s interest in his own Saxon origins.