This is the second in an occasional series of articles that profile pioneering scholars of stained glass in the United Kingdom. The series began with a study of the Revd Dr Christopher Woodforde. This instalment by our Features Editor, Roger Rosewell, focuses on the life of Mary A. Green, who can rightly be called the first female scholar of the subject in the UK.

In 1934, the Transactions of the Worcestershire Archaeological Society (TWAS) published the first instalment of what would become an eleven-part survey of extant and recorded medieval stained glass in the county: ‘Old Painted Glass in Worcestershire’.[1] Organized alphabetically by location, it included first-hand observations as well as information gathered from various antiquarian sources, including Thomas Habington and the Prattington collection of drawings in the Society of Antiquaries (London). By any standards it was an extraordinary accomplishment for an individual, yet until now next to nothing has been known about the author of this pioneering effort, Mary A. Green, Britain’s first published female scholar of medieval stained glass. Sadly, no obituary or appreciation of her life appeared at the time of her death, either in the TWAS or the Journal of Stained Glass. Seventy-two years later, this short article attempts to repair that dereliction. 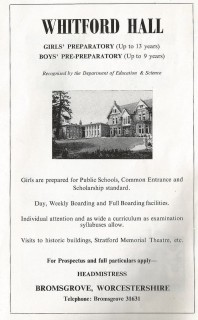 Mary Addison Green was born in 1873 at Whitford Hall, Bromgrove (Worcestershire), a large Victorian house built for her parents,[2] to John Green (1841–1934) and his wife Mary (1834–1912). Her father was a ‘wealthy grocer’ and a prominent figure in Bromsgrove society.[3] After retiring on his fiftieth birthday, he devoted the remainder of his life to assorted business ventures, voluntary organizations such as the boy scouts,[4] numerous charities (including membership of the board of Bromsgrove School), and service on the magistrates bench as a Justice of the Peace. He was also a churchwarden at the parish church of St John the Baptist in Bromsgrove [Fig. 1].[5] Mary had a sister who died in infancy, and two brothers, Arthur Robert Green (1865–1955), and John Gill Green (b. 1876), described in 1941 as a ‘retired instructor-captain in the royal navy’. 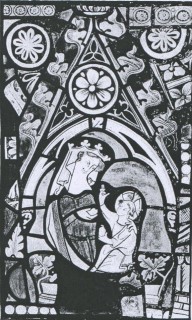 Fig. 2. Line drawing of Virgin and Child at the church of St John the Baptist, Fladbury, by Elsie Matley Moore, for part X of ‘Old Painted Glass in Worcestershire’.

Information about Mary’s early life is unknown, but in 1911, she became the first treasurer of the newly formed Bromsgrove Womens’ Suffrage Society, a self-declared ‘non-political and non-militant’ campaigning body supported by local middle-class professionals, including doctors and clergymen, and quite separate from radical organizations such as Emmeline Pankhurst’s Womens’ Society and Political Union (the suffragettes).[6] Mary was an ideal candidate for such a role – wealthy, clever and educated, she was exactly the kind of young woman the playwright and illustrator, Laurence Housman (1865–1959) had in mind when he spoke at a Bromsgrove suffrage meeting in 1913 and recalled growing up in the town, where ‘he saw women of equal mental capacity with men given a less chance of training for an independent career’.[7] Mary was also Honorary Secretary of the Bromsgrove Nursing Association and in 1925 was appointed as a magistrate, serving on the same bench as her father.[8]

For our purposes the turning point in her life may have come in May 1924, when she was elected a member of the Worcestershire Archaeological Society (WAS) together with Emily Moore, described as a maid attendant in the 1911 census.[9] Such an interest may have been encouraged by her older brother, Arthur, who apart from practising as a surgeon, was an acknowledged authority on medieval sun dials (also known as mass dials) and was eventually elected a Fellow of the Society of Antiquaries on 16 January 1930.[10] While there was nothing particularly extraordinary about Mary’s membership of WAS, the fact that Mary’s maid also joined must have raised a few eyebrows. The WAS had a reputation for being snobby and exclusive. New applicants were vetted and some were refused membership. 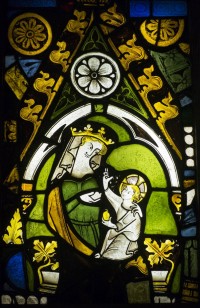 During her membership of the WAS, Mary showed a special interest in stained glass. She also became close friends with Elsie Matley Moore (1900–1985) and her friend and assistant, Audrey Shirley Jones (later Pettigrew). Elsie was a spinster who lived in Worcester with her mother and brother. She made extremely fine line drawings and watercolour copies of medieval stained glass windows.[11] Elsie and Audrey both contributed line drawings of stained glass to Mary’s eleven-part series the WAS [Figs 2 & 3].

The series itself was probably written before 1935, when the first instalment appeared in the TWAS. Mary’s introduction makes clear what she was trying to do:

My original intention when making these notes was: (A) To catalogue all the existing    old painted glass in Worcestershire up to the beginning of the 19th century; (B) To detail the relevant descriptions given by earlier writers ; (C) To add short notes shewing how the families commemorated in the glass were connected with the various parishes.

The scheme was ultimately found impracticable, from the point of view of length … and I am now confining myself to (A) as above and (B), a condensed list of glass given by the earlier writers and which now no longer exists.

The list of persons thanked by the author included Gordon MacNeil Rushforth (1862–1938), a former Director of the British School in Rome who had been living in Worcestershire (at Great Malvern) since 1903. Apart from his classical interests, Rushforth was also a noted medievalist who became interested in painted glass around 1910 and subsequently wrote articles and books about the subject. No mention is made of Emily Moore. 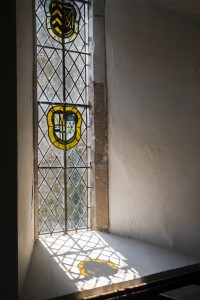 The series does what Mary said she would do. There are no mentions of glaziers or workshops, no descriptions of glazing techniques or styles. Most of the entries identify extant and lost heraldry [Fig. 4].

Inevitably there have been changes since Mary wrote. New sources have emerged, new articles been written, and new approaches adopted. Some of the glass has also moved: a unique fifteenth-century scene depicting the Christ Child baptizing St Christopher, which was catalogued as being in Birtsmorton Court has now been reinstated in the adjacent church from which it was taken; again, the fourteenth-century panel showing the Virgin and Child at Fladbury [Figs 2 and 3] is no longer in the north vestry window but in a stand-alone light-box. More importantly, a window depicting the Annunciation that Green saw at Hadsor (sometimes Hadzor) is now on loan to the Stained Glass Museum in Ely [Fig. 5].

But such changes are to be expected. What is not in doubt is that her efforts were – and remain – invaluable for anyone interested in Worcestershire’s rich heritage. They are also something more: a pioneering effort unique in the context of stained-glass studies. Her work is the first published study on the subject by a female scholar. She broke the mould. 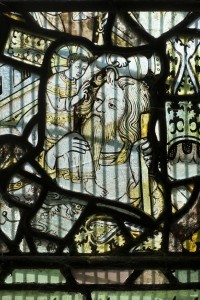 After her father’s death in 1934, Green left Bromsgrove in 1936 and retired to The Old Rectory at Stockbridge, closer to her brother, Arthur, who lived at ‘Croylands’, Old Salisbury Road, Romsey (Hampshire). Despite the move, she hosted members of the Bromsgrove ‘Evergreen’ scouts troop in the garden of her Hampshire home.[12] More to the point, she retained her membership of the WAS and was working on a new publication about stained glass at the time of her death on 12 January 1941. She had been ill for some time and was living at a nursing home in Banbury (Oxfordshire) when she died.[13] She never married and had no children. She was cremated after a funeral at the parish church of St John the Baptist, Bromsgrove.

Despite my best efforts, no photograph of Mary has been found to date. With luck, ongoing research into her remarkable life will produce more information.