The British Society of Master Glass Painters’ conference will be held 29 August – 1 September 2013 and will focus on Worcester and Gloucester [Fig. 1].

Subjects will include the Great East Window at Gloucester, the Tewkesbury choir, and Fladbury (all early/mid-fourteenth century), as well as the east window of the Lady Chapel at Gloucester and Great Malvern Priory (late fifteenth/early sixteenth century). The nineteenth century will also be represented, with work from the Clayton & Bell and Hardman workshops, alongside work from more local makers, including Preedy, Rogers & Bell of Bristol. The Arts and Crafts theme will be continued at the chapel in Madresfield Court, with glass (and much else) from Henry Payne’s Birmingham Group. There will be an opportunity to view and discuss work from the twentieth century (glass by the Webbs, A. K. Nicholson and Ninian Comper), as well as from the last two decades (glass by Caroline Swash, Alan Younger and Tom Denny). Also featured will be Joshua Price’s ten early eighteenth-century windows at Great Witley, a gloriously Baroque church. 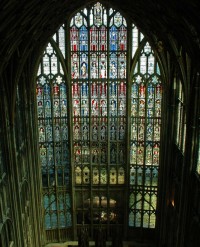 The conference is based at the University of Worcester campus. Speakers will include Peter Cormack, Geoffrey Lane, Penny Hebgin-Barnes, Steve Clare, Tom Denny and Tim Bridges (of the Victorian Society), as well as local members Roy Albutt and Robin Lunn. There will also be visits to several sites with medieval glazing (Great Malvern Priory, Gloucester Cathedral, Tewkesbury Abbey, Fladbury Church), as well as to Great Witley (for the 18th-century glass) and Madresfield Court, among other places.
The residential fee is £345 for members of the Society (non-members add £45) and this includes three nights’ accommodation in single en-suite rooms with breakfast, lunch (including Sunday), afternoon tea, evening meal and conference dinner on the Saturday night with a pre-dinner drinks reception. Also included in the price is all coach travel, donations and entrance fees to all sites. Student price on application. The non-residential fee of £280 includes all the above except accommodation and breakfast.

For booking and more information, see the BSMGP website.

As mentioned in Vidimus 66, the BSMGP Autumn Lecture will take place on Friday 11 October.  The lecture, given by Michael Peover and Elise Learner, is entitled ‘The renewal of the painted glass at Strawberry Hill’ and opens at 6.15pm for a 6.45pm start.

When Horace Walpole created his gothic extravaganza of Strawberry Hill, his mix of Netherlandish roundels and English armorials reflected on a domestic scale the monumental windows of King’s College Chapel where in his time at Cambridge he had researched their painters. After two major reorganizations of his collection of painted glass, and the sale of much of the English glass, the ongoing restoration of his house presented the chance to display the glass as originally intended, and to recreate some of the lost items from surviving original designs. The recreated displays make use of newly discovered contemporary watercolour sketches and fragments of the original coloured glass employed in the settings [Fig. 2]. The strategies used in the conservation of roundels with faded and missing detail, and their mounts, will be described. A particular problem in the use of enamel paints is to achieve the intensity and hue of the original using modern equivalents, and results of recent research on their combinations with modern glass will be presented. 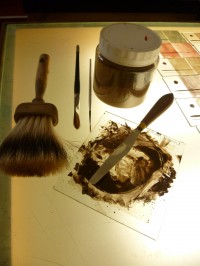 The Architectural Glass Centre, the commercial arm of the Swansea School of Architectural Glass, has been running glass-painting workshops/masterclasses with Jonathan Cooke for the past twelve years. The next workshop, which runs over three and a half days, is planned for 27–30 September 2013. The workshop is suitable for beginners or for those with previous experience of glass-painting. Jonathan Cooke will demonstrate glass-painting using a technique whereby a number of layers of paint can be built up prior to firing. He will also discuss materials, tools and firing schedules. During the workshop there will be ample time for participants to practise the technique and to produce samples.

An additional two and a half day workshop will be available, focusing specifically on the use of enamels and silver stain. This workshop will run from the 1 October to 3 October (midday).

The ICOM-CC interim meeting will take place this year in Amsterdam, 7–10 October 2013.

For the first time, the interim meeting of the ICOM-CC Glass and Ceramics Working Group and the Forum of the International Scientific Committee for the Conservation of Stained Glass (Corpus Vitrearum-ICOMOS) will be organized as a joint conference. These organizations have a great deal in common, and the conference presents an opportunity for them to join forces to present the latest developments in the conservation of glass, stained glass, and ceramics, whether in collections or in situ. Delegates will benefit from the shared experience of both groups and learn from the interactions and exchanges that are a central part of the conference experience.

The four-day conference will feature many talks specific to stained glass and its  conservation and will include thematic sessions on research in progress and case studies, as well as posters, visits and post-conference tours. 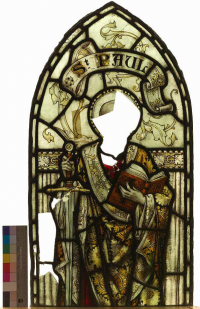 A stained-glass student is appealing for information on two panels. Together the two panels make up a standing figure of St Paul, probably of late nineteenth- or early twentieth-century date. The upper panel measures 390mm x 730mm.

The panels are of unknown origin. They may have been created by Powell & Sons, although there is no clear evidence for this other than aesthetics, including the pale white ground and the variety of the tone in the silver stain, which ranges from a pale straw to a burnt orange colour.

The lower panel has undergone an intervention in which it was re-leaded, and it is likely that the infills at the base of the panel – the drapery, feet and section of the floor – were added at this time. There are several areas of loss, including the head and part of the inscription. The incomplete inscription in the lower panel reads 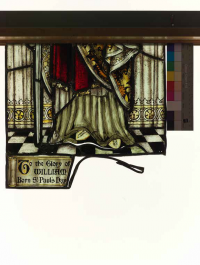 Information is sought on the origin of the panel, as well as examples of similar figures, particularly those which retain their heads. Any information is beneficial and very welcome! Please contact Sophie Gwynn at srg505@york.ac.uk.

The Corning Museum Calls for Submissions for the New Glass Review

The Corning Museum of Glass is inviting artists, craftspeople, designers and architects to submit images of new works that use glass for possible publication in their annual New Glass Review.

The New Glass Review is published by the Corning Museum of Glass, and is an annual survey of glass across contemporary art, architecture, craft and design.  The volume selects works created in the previous year by artists – both emerging and established – and students.

The deadline for submissions is 1 October 2013.  A changing jury of curators, artists, designers, art dealers and critics select the works, and in late November or early December, 100 images will be chosen from the submissions.

The New Glass Review is published every spring by the Corning Museum of Glass in conjunction with Neues Glas (New Glass), published by Ritterbach Verlag (Frechen, Germany) and GLASS: The UrbanGlass Art Quarterly, published by UrbanGlass (Brooklyn, New York).

See the website for more information and entry forms.