Belgian Glass in a Corner of Britain

Interest in the exquisite Belgian stained glass now in Great Britain is growing, not least of all because of the massive project to restore the glass from Herkenrode in Lichfield Cathedral. Stained Glass from Welsh Churches, a book by Martin Crampin to be published shortly, will cover the extraordinary Belgian panels to be found in a church in Anglesey, the island off the north-west coast of Wales. Martin, an expert on stained glass in Wales, here gives us an insight into what may be seen at the church of St Gwenllwyfo. 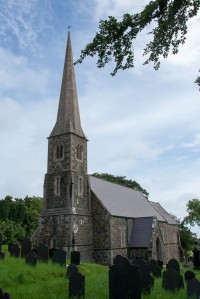 Northern Anglesey must be regarded as an unexpected place to find one of the best surviving collections of sixteenth-century Flemish glass. Situated off the north-west coast of Wales, the island is also home to the Parys Mountain copper mine, once the largest copper mine in Europe, which attracted artists of the picturesque and the industrial sublime in the late eighteenth century. The wealth from the mine and the Llys Dulas estate was inherited by William Lewis Hughes, from his mother Mary Lewis, and he was created Baron Dinorben after his retirement from Parliament in 1831. He had intended to build a grand new church for the estate, but this was carried out by his second wife Gertrude, and the church, designed by the diocesan architect Henry Kennedy and dedicated to St Gwenllwyfo, was opened in 1856.

Their daughter, Gwen Gertrude Hughes, married Sir Arundel Neave of Dagnam Park, Romford, Essex, in 1871. He had inherited some of the stained glass collected by his grandfather, Sir Thomas Neave, one of many English aristocratic collectors who bought Continental glass from the dealer John Christopher Hampp, who had settled in Norwich. Other sixteenth- and seventeenth-century stained glass from Neave’s house at Dagnam Park in Essex has since been dispersed.

The earliest scenes at the Church of St Gwenllwyfo, Llanwenllwyfo, probably date from the 1520s, while other panels use a range of enamel colours that dates them, along with the dress, to the later sixteenth century. Three Old Testament scenes are painted entirely in enamels on uncoloured glass, suggesting a seventeenth-century date. Many of the panels have unrelated glass above and below, some of which contains figures and architectural ornament. The panels in the nave are mounted internally across the windows on the north and south side, while the glass in the chancel is set directly into the window frames, which suggests that the panels must have been trimmed in order to do this.

One such example is the window in the south wall of the chancel, where a scene of the Mystic Marriage of St Catherine has been set above a portrayal of Christ’s feet being anointed in the house of a pharisee [Fig. 2]. It has been suggested that the upper part of the hanging behind Christ has been placed above the scene of the Mocking of Christ in another panel. The importance of this section of glass, which also contains a half-figure above, perhaps a prophet, with a scroll, is that it carries a date of 1522. J. O. Hughes, who wrote a guide to the glass at the church in 1995, noted that much of the glass came from a Carthusian Monastery in Leuven/Louvain, and suggests that 1522 was also the date of many of the other panels. However, the section with the date also has discontinuities with the upper edge of the interior of the house of the Pharisee, so it cannot be certain that the date corresponds to this or any of the other panels. On close inspection, the earlier sixteenth-century work does not all appear to be by the same hand, and could be by other workshops and made at different dates, even if they came from the same monastery.

Another clue suggesting that at least some of the glass was made in the 1520s is found in the east window. Most of the panels set into the window suggest an early sixteenth-century date, with the exception of the scene depicting the betrayal of Christ, which uses blue and green enamel found on painted roundels of the later sixteenth century. The uppermost cinquefoil depicts Charles V with Pope Adrian VI and courtiers, together with eleven apostles [Fig. 3]. Adrian VI was a native of Utrecht, and had tutored the young Charles; he was elected pope in January 1522, only shortly before his death in September 1523. This panel was from the memorial chapel to Adrian IV at the Carthusian Monastery at Leuven, built by the emperor Charles. A number of other panels at Llanwenllwyfo have a similar glass-painting style, so these can also probably be dated to the 1520s. 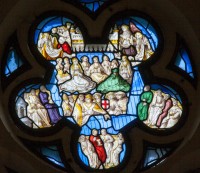 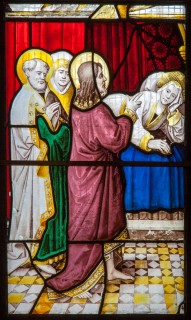 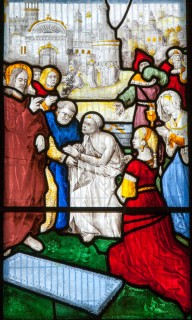 Any attribution to designers or studios in the period is always problematic, as workshops sometimes executed the designs of others. Timothy Husband has observed that the panel showing Christ healing Peter’s mother-in-law, which is similar to that in which Christ is anointed in the house of a pharisee, is close to the designs of the Valentijn van Orley workshop of around 1500 [Fig. 4]. However, the workshop may have not executed their own designs in glass. Valentijn van Orley’s son Barent designed the scene of the Mocking of Christ: Hughes refers to a drawing of it by the artist in a museum in Brussels. It is possible that the van Orley workshop provided designs over a number of years for the monastery that were made by another workshop. 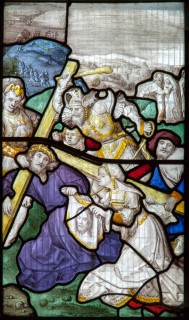 The late Hilary Wayment also attributed some of the early sixteenth-century panels at Llanwenllwyfo. For example, he identified the scene in which Christ raises Lazarus as the work of the St Gregory Master, who painted the roundel depicting Gregory’s vision of Christ as the Man of Sorrows, now at the Victoria & Albert Museum in London. Other panels, including that already mentioned of Christ anointed in the house of a Pharisee, were attributed to the workshop of the St Gregory Master [Fig. 5]. The painterly style of the Raising of Lazarus is closely echoed in several other panels, including the Mystic Marriage of St Catherine, several Old Testament scenes and the cinquefoil with Charles V with Pope Adrian VI, although Wayment attributes this to Peter van den Houte, an artist and glazier from Mechelen/Malines. Many of these panels have beautifully detailed backgrounds and some have additional narrative detail. For example the scene of Veronica with Christ carrying his cross has Mary and John looking on in the middle distance, while the other two crosses lie on the ground as a procession arrives at the hill of Golgotha in the upper left of the panel [Fig. 6]. Behind the scene of the Raising of Lazarus, Christ meets Mary and Martha at the gate of Bethany. Wayment also adds that the design of these panels is suggestive of the style of the van Orley workshop

The style of these sixteenth-century panels is also found elsewhere, such as in the portrait of Catherine Boelen with St Catherine at the Victoria & Albert Museum, as well as in other panels, also originally from the Neave collection, now at churches in Prittlewell, South Weald and Noak Hill in Essex, and Nowton in Suffolk. However, the number of panels at the Church of St Gwenllwyfo, most of which are in an excellent state of preservation, certainly gives credit to the recognition of these panels as the ‘Anglesey group’ as ascribed by Yvette Vanden Bemden and Jill Kerr.

All of the panels at the Church of St Gwenllwyfo, Llanwenllwyfo are illustrated in the online ‘Stained Glass in Wales’ catalogue at http://stainedglass.llgc.org.uk/site/324. The notes given with this glass there will be updated in the near future in the light of further research undertaken for the book Stained Glass from Welsh Churches.