The Wildman at Belsay 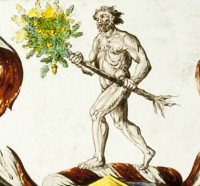 Fig. 1. Detail of the Wildman in the Belsay panel © English Heritage/ Bob Smith.

A new display that explores the mythical Wildman has opened at Belsay Hall, Northumberland. A part of European folklore since the medieval period, the Wildman – a creature from forests and mountain wildernesses on the edge of civilized society – was adopted as a symbol of the Middleton family of Belsay Hall from the fifteenth century. He appears as a crest on the family’s coat of arms, in wall paintings, as a carved stone statue, and was even stamped onto cutlery in the twentieth century. Over 600 years, the look of the Wildman has changed, as fashion, art and design have developed, but through all his representations the Wildman of Belsay has retained the same basic characteristics, being shown as hairy, strong and proud, and carrying his tree [Fig. 1]. The display looks at the history of the Wildman at Belsay, and exhibited alongside two late seventeenth-century statues of the man and woman, silver cutlery and books bearing the Wildman’s image, and a figurine of the Roman god Silvanus (one of the origins of the Wildman myth) is a rare seventeenth-century painted window [Fig. 2].

Belsay Castle has been the seat of the Middleton of Belsay family for over 700 years. John Middleton built the existing tower house before his death in 1396, and this was extended into a manor house in the early seventeenth century. A further wing was constructed in the early eighteenth century, but this was largely demolished in the nineteenth century, when the castle was remodelled; it is now a ruin. Belsay Hall, a large neo-classical hall, was completed in 1817 by Sir Charles Monck. The ex situ window had been stored in a first-floor room at Belsay Hall since at least the early 1990s, after parts of the Belsay estate were taken into state guardianship and placed under the care of English Heritage. In 2010, the window was removed to English Heritage’s Archaeology Store in Helmsley for assessment, research and conservation treatment. Based on historical evidence, the window is likely to have been produced at the end of the seventeenth century and installed in the early eighteenth century. It is the only surviving painted window from Belsay, and is a painted armorial still set in its original oak frame. The panel depicts a shield of arms surmounted by a baronet’s helm, topped with a wild man holding an erased and fructed oak tree; below the shield is a cherub head with golden wings above the motto ‘LES SIS DIRE’ with a red rose and a yellow narcissus on long stalks. The shield depicts the arms of the Middleton and Lambert families, and are those of Sir John Middleton, 2nd Baronet (1678–1717), who married Frances Lambert of Calton, Kirby Malham (granddaughter of General John Lambert) on 15 June 1699 at Kirby Malham. 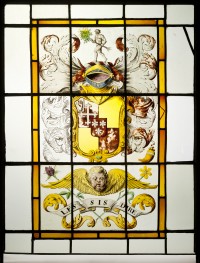 The painting of the panel can most likely be assigned to Henry Gyles (1645–1709), a master glass-painter and part of the Virtuosi group of the city of York in the seventeenth century, and the hearts of the lead cames of the inner section of the window are impressed with the legend ‘*EDMOND*GILES*OF*YORKE*1665*’ – Henry continued to use his glazier father Edmond’s lead mill throughout his career.

Although Gyles usually signed his work, the window does not exhibit a signature, but it is possible that he signed a pane missing when the window was found. The painting matches a number of Gyles’s works stylistically; the dull red and now failing green enamels are indicative of his work, and he had a friendship with Frances Lambert’s father, John Lambert, providing further evidence that he painted this window.

The exhibition is being held in Belsay’s Pillar Hall and is open daily 10am – 6pm. 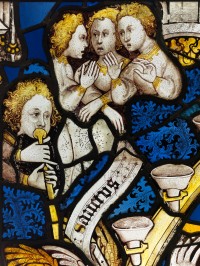 A limited number of places are available for the two days of lecture sessions at the 27th International Colloquium of the Corpus Vitrearum, which take place at the Tempest Anderson Hall of the Yorkshire Museum on 7 and 8 July 2014. The fee is £100 for the two days, and includes the lectures with translation services, the conference pre-prints volume, and tea/coffee (lunch is not included).

To register, please contact Brittany Scowcroft at the University of York by email at CV-2014@york.ac.uk.

The provisional programme is as follows:

From 08.30 Registration at the Tempest Anderson Hall
09.00–11.45 Welcome, colloquium opening and reports of the national committees of the Corpus Vitrearum

Madeline H. Caviness (USA)
Could inscriptions in stained glass be read, and did it matter?

Jim Bugslag (Canada)
Interaction between Sermons and Stained Glass: A Case Study of the Good Samaritan Window at Chartres Cathedral

Rachel Koopmans (Canada)
‘Here the Blood is Applied’: Inscriptions and Story-telling in the Miracle Windows of Canterbury Cathedral

J. M. A. Caen and C. J. Berserik (Belgium)
Fables, Stories and Other Literature Depicted in Stained-Glass Roundels and Small Panels from the Low Countries

Events at The Stained Glass Centre 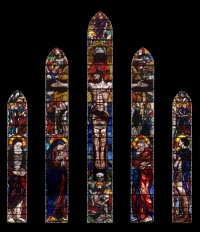 The 2014 spring lecture will take place on at 7.30 pm on Thursday 22 May, at St Martin-cum-Gregory, Micklegate, York. The lecture, entitled ‘“He is not Here …”: First World War memorial stained glass and the fragile art of remembrance’, will be given by Dr Neil Moat, independent scholar, lecturer and author.

The Stained Glass Centre’s contribution to the commemorations of the start of the Great War is an illustrated lecture by one of Britain’s leading scholars in nineteenth-century stained-glass studies. Dr Neil Moat has been a member of the Victorian Society for over twenty-five years, and in that time has gained a reputation as a historian and lecturer on Victorian and Arts & Crafts churches, stained glass, and decorative arts in the north-east of England. He has served on various diocesan advisory committees, has recently joined the Church Buildings Council, and is Secretary to the Glaziers Trust.

Tickets £6 (£5 concessions) are available on the door. Doors open at 7pm. Refreshments will be available.

The Stained Glass Centre is delighted to offer two guided tours of churches in the centre of York, examining the wealth of medieval, Victorian and modern stained glass in this city. Each tour will be led by our expert guides, beginning at 6.15 pm and lasting for around one and a half hours.

The cost of each walk will be £6. Please note that a donation will be made to each church’s funds. To reserve a place, please email events@stainedglasscentre.org.

The Stained Glass Centre is offering four workshop days this summer, which will be led by Ann Sotheran, a fellow of the British Society of Master Glass Painters, who has over twenty-five years of experience in designing and making stained glass. Two different workshops are available, and each workshop is self-contained.

In this one-day workshop you will be introduced to basic techniques of painting on glass, as used by artists from the medieval period to the present day. With our expert tuition you will practise using different brushes to produce different effects, and by the end of the day you will produce a painted piece to be fired. If you also attend a glazing day, you will be able to incorporate your painted piece into a leaded panel.

In this one-day workshop you will learn the basic techniques of cutting coloured glass to shape, leading, and soldering the pieces to produce a simple but charming piece of stained glass. If you have previously attending a painting day you will also be able to incorporate your painted piece into a leaded panel.

Numbers are limited to ten at each workshop. To book a place, or for more information, please visit the Stained Glass Centre’s website, or email events@stainedglasscentre.org. 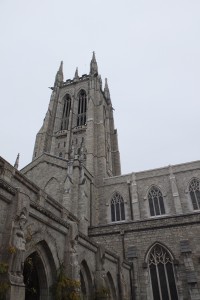 The event will feature a workshop in which Tom Kupper and Dean Beal of Lincoln Cathedral will demonstrate methods and approaches for conserving and preserving medieval stained glass.  Using medieval stained glass from the renowned Pitcairn Collection at the Glencairn Museum, they will discuss issues such as mechanical and chemical cleaning methods, glass analysis, environmental monitoring, and the development of protective-glazing systems.  There will be demonstrations of painting techniques; explanation of support materials such as full-scale polycarbonate transparencies; facsimile glass; examples of historic and modern metal work, and environmental and chemical glass analysis documentation.

There will also be a talk by Sarah Brown, Director of York Glaziers Trust, and a series of lectures on conservation, as well as on glass at Bryn Athyn.

For a detailed schedule and registration information, visit the conference blog and website.

An extraordinary display of medieval seals – including one belonging to King Henry VII – has opened to the public [Fig. 1]. The exhibition, entitled ‘Small Objects of Power’ is being held at Berkshire Record Office, Reading, and admission is free. 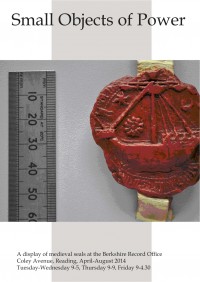 Included in the exhibition, which celebrates a very personal form of medieval art, are the seals of two archbishops of Canterbury, the seal of the Master of the Knights Hospitaller in England, and the special lead seal or bulla of a fourteenth-century pope. To find out more about the exbihition, contact the Berkshire Record Office, 9 Coley Avenue, Reading RG1 6AF, or call 0118 937 5132. The exhibition runs from April to August and is open at the Record Office on Tuesdays and Wednesdays 9am – 5pm, on Thursdays 9am – 9pm, and on Fridays 9am – 4.30pm.

A landmark church in Cork city has launched a fund-raising drive to aid urgent repairs. St Vincent’s Church in Sunday’s Well, which opened in 1856, has had preventative maintenance work carried out to weatherproof the south face of the church, but a report has shown serious deterioration in the upper windows and surrounding plaster work.