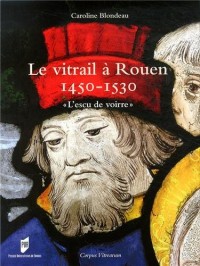 This is a beautiful book about glass-painting in Rouen (Normandy) during the late Midle Ages. The city had always been one of the richest in France and an important centre for  stained glass – the cathedral contains a number of excellent thirteenth- and fourteenth-century windows – but during the period under review in this study, there was a succession of dramatic changes in its political and artistic fortunes.

In 1419, the city had surrendered to the English king, Henry V, who annexed it (and Normandy) to his Plantagenet domains. Over the next thirty years, it was the centre of English power in occupied France, witnessing the burning of Jeanne d’Arc in 1431, until finally the French king, Charles VII recaptured the town in 1449. A major programme of reconstruction then began. 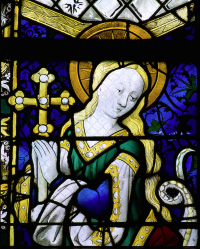 This book explores the history of glass-painting in the city after the collapse of English rule until 1530 by focusing on the life and work of the Barbe family, a local dynasty of glass-painters. Based on surviving windows and documents in the city archives, it pieces together how artists functioned in the city during this period, the structure of glass-painters’ workshops, the social status of the Barbe family in the artists’ parish of Saint-Nicholas, and finally the business and professional framework in which they operated. Special attention is paid to their work in the cathedral. Examples of their work in the Rouen region, such as at Caudebec-en-Caux, are also discussed.

Several appendices add to the book’s value: the first lists all known glass-painters in the city between 1450 and 1530, including such well-known figures as the Netherlandish painter Arnoult de Nimègue; the second is a catalogue of work attributed to members of the Barbe family. Excellent illustrations complete the enjoyment of the book.