Images, Words and the Word in Sixteenth-century Glazing

The following piece was originally presented as a poster board at the 27th International Colloquium of the Corpus Vitrearum on the theme of ‘Word and Image’ held in York in July 2014. 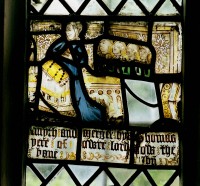 In England as the sixteenth century progressed, the proportions of newly commissioned windows and individual glazed panels occupied by words and images respectively changed markedly in favour of words. One major cause of this was already established by the start of the century, but the other was unforeseen. The first reason was that words were cheap to produce: an inscription was merely paint on white glass, while images usually included at least some coloured glass, which was more expensive. This was an important consideration for donors with modest means. The other factor was the Reformation which, as the century progressed, resulted in the curtailment of the religious imagery that had theretofore occupied the greater part of any glazing scheme. The more important donors could to some extent replace such images with heraldic display, but the humbler sort did not have this option, and their inscriptions expanded accordingly to take up the space.

These changes are illustrated by surviving and recorded glazing in the north-west of England. The cost factor is demonstrated by a pair of damaged rectangular panels of c.1500 at Plemstall (Cheshire) that depict a male donor kneeling with his seven sons, and his wife with her four daughters [Fig. 1]. The commission was an inexpensive one, crudely executed on white glass in paint and silver stain, with coloured glass used sparingly for the garments. The lower third of both panels consisted of a now jumbled and incomplete English inscription requesting prayers for the health of Thomas Smyth, his wife Margaret, and their children, who gave the window in the ‘yere of owre lord …’ (the date is missing). The words were punctuated with flourishes ornamented with yellow stain that helped to integrate them into the panels’ decorative scheme. There was no incentive to keep the inscription brief, as its three lines of text served to bulk out the panels at minimal cost. The evidence of comparable glazing from this period surviving in the vicinity suggests that the Smyths’ donor panels would originally have accompanied simple religious imagery such as Christ crucified between the Virgin and St John, or the figures of saints.

Some donors seized the opportunity offered by the trend for longer inscriptions to proclaim their own importance. In a now fragmentary Latin inscription of 1523 in a window of Wilmslow Church (Cheshire), Humphrey Newton asserted his eminence by listing the previous five generations of his heiress wife’s ancestry, which was somewhat more illustrious than his own. Peter Stanley set forth his honourable status in full in a lost English inscription formerly in Eastham Church (Cheshire): ‘Pray for the soule of Peter Stanley of Bykerstath Esqr one of the yonger sones of Willm Stanley of Hoton Kt: & Elizabeth his wife being daughter & heire of James Bickerstaffe, & Margaret his wife, wch Margaret was daughter & heire of Thomas Atherton of Bycrstath Esqr wch made this windowe ano 1543’. 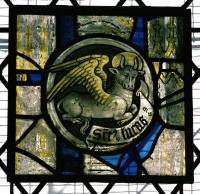 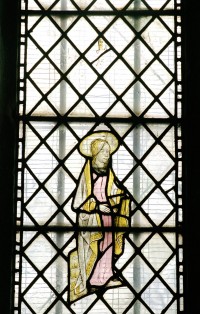 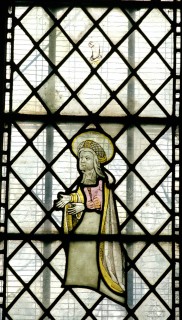 The region’s longest surviving inscription is found at Sefton Church (Lancashire) in the window of a chantry founded by a wealthy widow. It requests readers of their charity to pray for the soul of Margaret Bulkeley, daughter of Richard Molyneux, knight, and wife of John Dutton and William Bulkeley esquire, whose goodness caused the window to be made by the will of her executor the priest Robert Parkynson in the year of our lord 1543: the latter portion of the inscription records that Margaret died on 21 February 1528 and begs Jesus to have mercy on her soul (‘amen’). [Fig. 2, click to enlarge]. This loquacious inscription consists of three lines of English text running across all four lights of the window Margaret funded, which formed part of the reglazing campaign undertaken during the 1540s by her family, the Molyneuxs of Sefton. The plentiful religious imagery surviving from this campaign includes the Trinity, Evangelist symbols, and fragments of scenes from the life of Christ and the Virgin [Fig. 3]. It demonstrates that the Molyneuxs’ commitment to traditional Catholicism had not been shaken by the tentative steps towards Reformation that Henry VIII had taken during the 1530s. Margaret’s inscription brims with confidence in the long-established system of prayers for the dead that would be abruptly suppressed in 1547, less than four years after her window was glazed, when all chantries, including her foundation at Sefton, were abolished by a rapacious state. 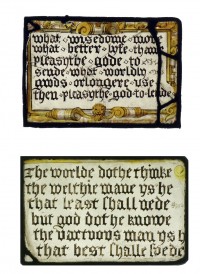 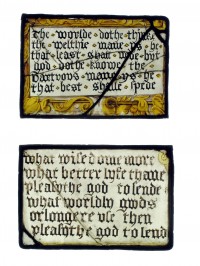 The Protestant religion established during the reign of Edward VI (1547–53) demanded the removal of idolatrous imagery and inscriptions requesting prayers for the dead. Episcopal injunctions reflecting governmental policy stated that if a window was to be painted it must not be ‘the image or picture of any saint but either branches, flowers, or posies [mottoes] taken out of Holy Scripture’.[1] This type of glazing is exemplified by two pairs of small rectangular panels dating from the mid-sixteenth century that are now in the Walker Art Gallery, Liverpool, although their original location and setting are unfortunately not recorded [Fig. 4]. The panels bear the following short edifying verses, which, although not quotations from Holy Scripture, would have been acceptable to Protestant sensibilities:

‘The worlde dothe thinke the welthie mane ys he that least shall nede,
but god dothe knowe the vartuous man ys he that best shalle spede’

In the more complete pair of panels the inscriptions are set on cartouches framed by restrained Renaissance ornament, including scrollwork, lion masks, foliage and fruit. The other pair was probably similar, but the edges have been trimmed off, accentuating the supremacy of the written word over even modest, subservient decoration.

The promotion of words was accompanied by the purging of religious imagery, but this proceeded slowly in the region. For example, it was not until 1574 that a glazier was paid ‘for mendinge of the glasse wyndowes and defacing of the Images’ in Holy Trinity Church in Chester, a city that was the headquarters of a diocese whose bishop who should have undertaken their removal fifteen years earlier. The continuing demand for memorial glazing was also demonstrated in 1574 by the death of Dr William Wall, a prebendary of Chester Cathedral. He was buried beneath the cathedral’s west window and commemorated in it by a verbose but now lost Latin inscription that chronicled his life story in some detail. It recorded that he was the son of William Wall, a poor hermit, and had become a prebendary of the cathedral after being a Franciscan friar. After his wife’s death, he had settled in the solitude of Mount Mulicarnis, where he led a solitary life of prayer, fasting and contemplation. Wall’s is an interesting example of a career that spanned the English Reformation and the transition from memorial windows to the increasingly wordy epitaphs engraved on memorial slabs with which his contemporaries were being commemorated during the Elizabethan period: his inscription evidently served as the equivalent of such a tomb slab. 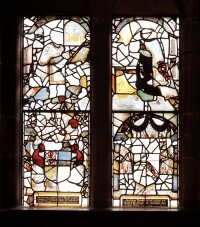 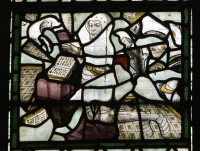 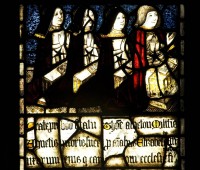 Surviving glazing in this region also sheds interesting light on the appearance of both words and the Word within donor images rather as an adjunct to them. In 1581, Thomas and Isabella Leigh glazed the east window of their domestic chapel at High Legh (Cheshire), which has survived in its entirety, albeit badly damaged. It depicts the donors kneeling at prayer desks upon which lie open books [Fig. 5]. This followed the pre-Reformation tradition evidenced by the similar figures of earlier sixteenth-century donors with desks that survive at other churches in the region, including Over (Cheshire) [Fig. 6], Ashton-under-Lyne [Fig. 7], Denton [Fig. 8], and Middleton [Fig. 9] (the latter all in Lancashire). However, the focus of these earlier donors’ devotions was religious images, which having being condemned by the reformers as idolatrous were conspicuous by their absence from the Leighs’ window, leaving the couple to kneel in worship before their own outsized armorials. 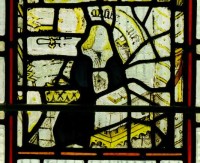 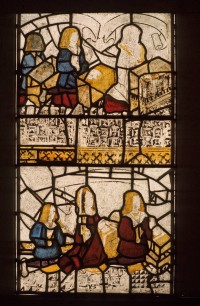 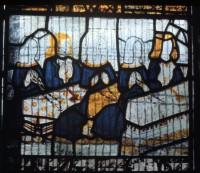 Also absent from the High Legh window were prayer beads, which were rejected by Protestants as superstitious. However, the pre- and post-Reformation divide in this case was not straightforward. Some of the earlier donors, including the Smyths at Plemstall [Fig. 1] and similar groups at Middleton [Fig. 10] and at Mobberley (Cheshire) [Fig. 11], were depicted with strings of beads laid conspicuously over their desks in place of books, but it should be noted that beads do not appear in several surviving donor panels that predate the Reformation. Members of the Ashton family at Ashton-under-Lyne [Fig. 7], donors at Middleton (c.1500–10) [Fig. 9], a man and wife at Denton (c.1532) [Fig. 8], and John Starkey at Over (1543) [Fig. 6] all kneel before desks bearing books but no beads. This suggests that donors who could read or at least follow a text chose to stress this ability, which indicated their social status, by being depicted with open books. Meanwhile their humbler, illiterate counterparts showed their piety by prominently displaying their beads. 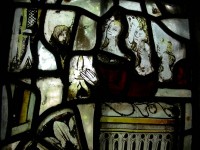 There was another subtle but significant difference between the High Legh window [Fig. 5] and its predecessors. All the surviving open books on the earlier donors’ prayer-desks depict text, but at High Legh the text is represented by meaningless lines [Figs 6, 7, 8, 9]. By contrast, the open book on Thomas Leigh’s desk contains an English inscription: ‘Thy word is a lantern unto my feet and …’. His wife’s book is lost, but the hanging ‘and’ suggests that it may have contained the completion of the line – ‘a light unto my path’ – which is verse 105 of Psalm 119 in the English Bible. This small snippet of text illustrates one of the most profound changes of the Reformation. Books bearing verses from the Psalms were not unprecedented, as demonstrated by a good surviving example in a window dated 1437 in St Martin-le-Grand, Coney Street, York, depicting its donor, the rector Robert Semer, with a book displaying the opening words of Psalm 50 of the Latin Bible [Fig. 12]. The difference is that Semer’s text is in Latin, whereas Thomas Leigh’s is from the English translation of the Bible, which had been banned until 1538, when Henry VIII ordered all churches to obtain a copy. With its text stressing the primacy of the word of God, the High Legh glazing is significant as the sole surviving demonstration in a window of the observation by historians that around 1580 English Protestants rejected the visual imagery in favour of the word alone and ‘became the people of a book, and that book was the Bible’.[2]

(As a bizarre postscript, in March 2014 the biblical text Thomas Leigh chose to display to the godly congregation at High Legh reached a wider audience than he could ever have imagined. After teenage superstar Justin Bieber was arrested in Miami for drink-driving, police department photos published around the world revealed the following inscription tattooed on his shoulder: ‘Your word is a lamp for my feet, a light on my path Psalm 119:105’).