This appreciation of Geoffrey Clarke has been kindly supplied by Judith LeGrove.

Geoffrey Clarke, who has died aged 89, was one of a handful of students at the Royal College of Art (RCA) who revitalized stained glass in the early post-war years. On his arrival in 1948, the Department of Stained Glass was newly headed by Lawrence Lee (1909–2011), a practitioner whose own studio work was informed by a thorough understanding of the medium’s historical context. Yet the Department was on the cusp of change, enlivened by a talented intake after the war, and urged by Principal Robin Darwin to stake its territory. Writing for Architectural Design in 1951, Lee outlined the new lines of enquiry in his Department: the embedding of coloured glass fragments in plaster to form mosaics, the superimposing of sheets of flashed and acided glass to achieve effects as vibrant as coloured prints, and the rhythmical use of leading to shape a composition. Lee also flagged up the RCA’s research into stained glass for secular situations, such as domestic screens or artificially lit panels. The works illustrated were by three third-year students: Clarke, Jean Edwards and Keith New (1926–2012). 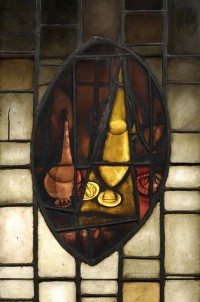 Clarke had not, in fact, applied to study stained glass at the RCA. Lured by the buzz surrounding Richard Guyatt’s newly named ‘School of Graphic Design’, he had originally intended to continue studies in illustration, typography and design he had begun under the inspired eye of Ronald Grimshaw at Lancaster and Morecambe College of Arts and Crafts. At the RCA, however, he was disillusioned, transferring instantly (in an identical move to Keith New) to stained glass. Thus Clarke immersed himself in a world he had known since childhood through his father (an architect) and grandfather (a church furnisher). Touring the Lake District and the north-west, Clarke’s grandfather had carried with him catalogues and samples of memorial, historical and heraldic windows, leaded lights, mosaics in glass or marble, as well as original sketches for stained glass from the Lancaster-based firm Shrigley & Hunt.

It was designs similar to Shrigley & Hunt’s that Clarke began to draft at the outset of his studies. His earliest panel in glass was a copy of a roundel in the Victoria & Albert Museum, ‘October’, from a ‘series illustrating the months’ of c.1450–75 (V&A, C.127-1923). By the end of his first year, Clarke had made a large, leaded Still Life in shades of sepia, red and ochre [Fig. 1]. Robin Darwin described the work as exceptional – hanging it in a window in the main College building and awarding Clarke a silver medal at the Convocation in July 1949.

Ripples from the Department gradually spread beyond the RCA. At the end-of-year exhibition in 1950, critic M. H. Middleton noted an unaccustomed liveliness in the glass section, which he had expected to find moribund. Articles on secular and ecclesiastical stained glass appeared in the RCA’s groundbreaking student journal, Ark, in February and October 1951. Six months later, Clarke’s first solo exhibition, at Gimpel Fils in London, included five examples of plaster/glass mosaics, alongside etchings and iron sculpture. Middleton, reviewing for the Spectator, noted that the heavy encrustations of Clarke’s plaster mosaics suggested the active, turbulent quality of early glass, though smouldering rather than bursting into flame.

Graduating in stained glass in 1951, with a first-class degree and a gold medal for outstanding distinction, Clarke used a bursary to visit examples of modern glass in France (including Matisse’s newly completed chapel at Vence), before returning to the College for a fourth year. It was during this postgraduate year that Clarke’s professional career could be said to have taken off. He was selected as one of eight young British sculptors to exhibit at the British Pavilion of the Venice Biennale in 1952, alongside Robert Adams, Kenneth Armitage, Reg Butler, Lynn Chadwick, Bernard Meadows, Eduardo Paolozzi and William Turnbull. These artists received international recognition as the ‘geometry of fear’ sculptors, following a catalogue essay by Herbert Read which emphasized the gaunt linearity of their work as well as its fugitive presence in materials such as wire, plaster and iron. Then, in the autumn of 1952, architect Basil Spence awarded the commission for ten stained-glass windows for the nave of Coventry Cathedral to a team of three designers from the Royal College of Art. Clarke and New were chosen on the strength of their recent work, with the assurance that Lee’s greater experience would anchor the project, and undergraduate students were selected as assistants. The Coventry commission lasted five years from design to completion; revealing, on installation, a coloured progression from childhood to the wisdom of maturity, with one side assigned to God and the other to Man. Clarke produced two purple windows and one multicoloured, assisted by his wife Ethelwynne (known always as ‘Bill’).

Paradoxically, by the time of Coventry’s consecration in 1962, Clarke would be best known as a sculptor. Just as his spindly iron sculpture seemed, for many, to capture a sense of post-war Angst, his work in aluminium – and particularly the Flying Cross, installed on Coventry’s spire by RAF helicopter – embodied a new optimism. Yet he would never be confined to a single medium or approach. By 1948, he was a fledgling print-maker, producing images that became more and more deeply etched. In a parallel move he sought to enliven the flatness of stained glass by treating its leading first as a rhythmical, sculptural element, then by creating texture through plaster. In 1951, Clarke made an iron screen, Icarus, for the Transport Pavilion at the Festival of Britain, into which he set small areas of coloured glass.

Advancing this concept still further, in 1956 he produced his first sculptural window, for the architect Frankland Dark’s flat at Hyde Park Gate. Assembled from protruding lead circles set with irregular pieces of coloured glass, it attracted considerable critical interest and toured the USA as part of the wide-ranging display of contemporary work, ‘British Artist Craftsmen’ (1959–60). Yet it was a new technique of casting using expanded polystyrene that enabled Clarke to produce his most radical windows combining metal and glass. In the late 1950s, he began to experiment with carved polystyrene models embedded in damp sand. He discovered that molten aluminium would vaporise the expanded polystyrene, leaving behind a precise metal replica of the original. The process was simple and quick, but retained for Clarke, always, a sense of wonder. 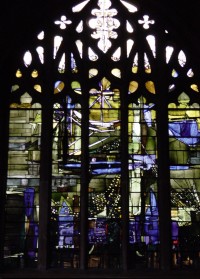 Clarke’s first commission to use this technique was in 1961: a set of twelve, small hexagonal windows for the east wall of the new Church of the Ascension, Crownhill, Plymouth, designed by architect Robert Potter. The windows were small enough to be cast as single pieces, prior to glazing, and Clarke’s choice of subject (the twelve sayings of Christ) allowed for bold symbolic treatment. For Clarke, an added attraction was that the windows possessed sculptural interest even when viewed from outside. Further windows to use this technique were made for Ipswich Civic College (1961), Taunton Crematorium (1963), and Manchester Art College (1969).

All of these commissions were made in a foundry at Clarke’s own home in Suffolk. Having decided early on that he wanted to manage all aspects of producing his work, in 1954 he bought a dilapidated house near Bury St Edmunds and gradually transformed different areas to workspaces, at the same time gathering about him a small team who could do anything from scaling up maquettes to installing works at their final destination. It was in this foundry that a wealth of sculpture for public buildings was produced, including commissions for Castrol House (1959), Oriana (1960), Canberra (1961), Thorn House (1961), Chichester Cathedral (1961–84), the Guards Chapel at Wellington Barracks (1963), Nottingham Playhouse (1963), Farm Credit Banks, St Paul, Minnesota (1966), Newcastle Civic Centre (1968), York House, Pentonville Road (1984), and numerous other churches, schools, universities and banks.

From the late 1960s, public commissions dwindled due to a slowing in the rate of post-war construction. Clarke was appointed Head of the Department of Light Transmission and Projection (formerly Stained Glass) at the RCA from 1968 to 1971, during which time he experimented with acrylic, extruded and coloured with smoke, and also with silvered glass, in relation to an unrealized commission proposal for Christ Church College, Oxford. His interest turned to landscape projects, then to sculpture based on spiritual or philosophical themes. Perhaps overlooked in these later years, Clarke was never deterred from making or thinking about art, and until his eyesight failed rarely a day passed when he did not produce at least a handful of drawings. He leaves an extraordinary legacy; proof both of the power of the creative imagination and that there will always be new ways of working with materials.