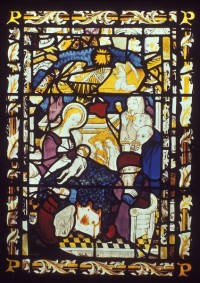 As another year draws to a close, the Vidimus team would like to thank its readers and contributors for their continued support. Do keep in touch and let us know of any news you may have or anything you would like to see featured.

We wish you a very merry Christmas and a happy new year. We will be back in January! 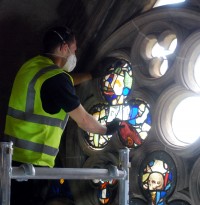 Fig. 1. A tracery panel being installed by a member of the Barley Studio team.

We reported in issue 84 that Lichfield Cathedral’s beautiful Herkenrode glass was being readied for reinstallation, and we can now bring you the news that installation is under way and going well. Plain glazing was installed in the window openings when the panels were removed, and the historic glass is now being installed to the inside of this plain glass as part of the isothermal glazing system, meaning that it no longer has to function as a weather shield for the building. This internally ventilated external protective-glazing system prevents damaging moisture – atmospheric moisture on the outside and condensation on the inside – from reaching the original glass.

Fig. 2. The reinstallation under way.

A BBC East Midlands video on the installation can be accessed via the Barley Studio Facebook page.

Exhibition Review: Light in the North: Modern Glass-Painters of York 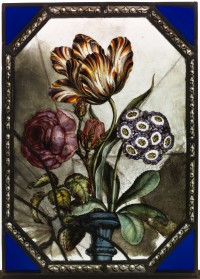 The art of staining and painting glass is a vibrant part of York’s culture, both past and present. Stained-glass panels can be admired almost everywhere in York, but the most popular perhaps are the medieval windows, particularly from the Minster. Younger examples of late eighteenth- and nineteenth-century glass are also to be found in various architectural settings in the city, each with its own distinctive style and aesthetic [Fig. 1].

Modern Practice
The Light in the North: Modern Glass-Painters of York exhibition in the Stained Glass Centre (St Martin cum Gregory Church, Micklegate, York) continues the story of York’s stained glass by presenting a rich range of twentieth- and twenty-first century panels. Displayed in chronological order, the exhibits highlight a modern movement in stained glass initiated by the Dean of York, Eric Milner-White. In 1947, he invited Harry Stammers to York; he established a workshop where new generations of artists – Sep Waugh, Harry Harvey and Ann Sotheran – were taught the craft. Skills and practice were passed from master to apprentice, which meant that the craft retained its traditional teaching methods and techniques at a time that other crafts were being modernized, causing some skills and professions to diminish and be lost. At the exhibition, viewers can trace the influence of one glass-painter on another, yet still see the independent styles of each artist. 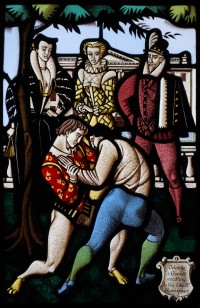 The pieces exhibited show how the artists introduced contemporary aesthetics into a traditional practice, and it was interesting to see how they achieved various effects using the same technique. Harry Stammers’s biblical themes were presented with modern modelling of the figures that echoed the paintings of Georges Braque. His panels acknowledge the past, yet offer a new, fresh interpretation, with vivid colours and energy radiating from the scenes. In contrast to Stammers’s detailed designs, Harry Harvey’s style is simpler and somewhat more straightforward. His figures are thus very expressive and memorable [Fig. 2]. Sep Waugh’s vidimuses show interesting designs executed in a modern manner, but with reference to schemes traditionally typical for stained glass. Ann Sotheran’s works differ from the other exhibits. Her Games and Allium play with perception, and her colour changes within shapes, challenging the contours defining the subjects. Finally, Helen Whittaker’s panels showed a variety of styles, where excellent draughtsmanship and unconventional compositions give a twist to traditional subjects, such as the Expulsion from Paradise.

The exhibition extends the historical perspective of the craft into the future, by presenting complex conservation issues and techniques, and showing how modern conservation skills are being passed to a new generation. In this respect, the eighteenth-century panel depicting a vase of flowers, for which recent conservation treatments were explained, was of particular interest. The panel, conserved in 2013 by a student on the MA in Stained Glass Conservation and Heritage Management at the University of York, was painted by Peckitt – a famous eighteenth-century glass painter, whose works can be admired in various places in York (including the Minster, the Art Gallery, and the Stained Glass Centre), closely connecting it to the exhibition’s theme. Like Stammers, Peckitt is considered to be among those artists whose works greatly contributed to the revival of stained glass during their lifetimes.

Stained glass creation requires skill, as does the manufacture of materials used to make it: glass, lead and paint. The production of these materials has evolved over the centuries, but little has changed in terms of basic principles. A short film, presented alongside the exhibition, explains both the step-by-step manufacturing processes and stained-glass techniques in an accessible way. The presentation of vidimuses, sketches, cartoons, paintings and stained glass side by side allows constant comparison, but also shows how designs evolve at each stage of the creative process.

The exhibition contributes towards a better understanding of this complex craft and provides a fresh perspective on York’s stained-glass treasures [Fig. 3]. The exhibition was curated and mounted by a volunteer team of history of art students from the University of York, to celebrate the launch of the Friends of the Stained Glass Centre. It will be open 10.00–13.00 on Saturdays until 20 December, when the Centre will also be hosting carol singing, from 5:45pm. For more information, please visit the Stained Glass Centre’s website. 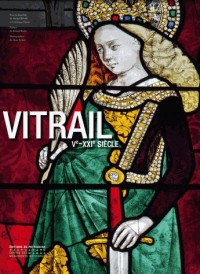 This book published last month explores the history of glass from the Middle Ages to the twenty-first century, highlighting the extraordinary vitality of this art throughout the centuries. Written by fifteen specialists of ancient and contemporary glass, the book offers a synthesis of the extraordinary riches of the art of stained glass in France and explores issues such as historical context, monumental design, private settings, and the collaboration between painters and glass artists. The text is accompanied by over 600 exceptional illustrations, showing stained glass both in architectural settings and under observation at close quarters.

The book is available for purchase online. 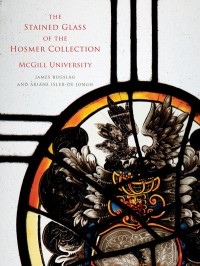 Fig. 2. The Stained Glass of the Hosmer Collection McGill University.

This volume focuses on the Hosmer Collection, one of the most significant collections of secular pre-modern stained glass in North America and the largest in Canada, consisting of panels intended for windows of private residences and non-religious spaces. The book addresses the diverse subject matter (ranging from allegories to heraldic displays), provenance (the Low Countries and Switzerland), style and dating, and puts forward new ideas on collecting practices, architectural design, and the installation of pre-modern stained glass in new buildings.

The book can be purchased online.

A short new series covering a year in the life of Canterbury Cathedral will be shown on BBC2 this month. The producers had unparalleled access to the cathedral over the course of a year, and the series will take audiences inside the building and its community. Viewers will get an insight into the workings of the cathedral – the Dean and Chapter, as well as the wider community of choristers (including the new all-girl choir), the stained-glass conservationists, stonemasons, apprentices, and the many pilgrims.

Vidimus readers will be interested to see the renewal work on the fabric of the building, including on the stonework of the Great South Window, and the stained glass from the cathedral that travelled outside the cathedral precincts for the first time in its 800-year existence, exhibited in the USA.

‘Canterbury Cathedral’ will be shown on the 12, 15 and 19 December at 9pm on BBC2, and will be available on the BBC iPlayer.