THE IDENTIFICATION OF TWO WINDOWS ATTRIBUTED TO GAUDÍ IN VALLGORGUINA 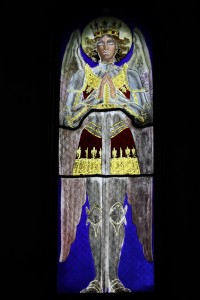 In 2009, the Institut d’Estudis Catalan and the Department of Culture of the Catalan government signed an agreement to compile an inventory of Catalan stained glass from the Baroque period up to 1925. This takes up and continues the study of Gothic and Renaissance stained glass windows carried out by the Corpus Vitrearum Medii Aevi of Catalonia directed by Dr Joàn Ainaud de Lasarte. The inventory has a double objective; the first is to catalogue the secular and religious stained glass in Catalonia, and the second is to establish an assessment system for prioritizing possible restorations.

It is in this context and in scouring Catalonia that we discovered some of the earliest windows of the architect Antoni Gaudí, in a small private chapel in the municipality of Vallgorguina (Barcelona). The news that there were some windows, possibly by this distinguished architect, was passed on to us by an investigative journalist, A. M. Ferrín, who is also the author of several books. While working in this area and researching the documentation of Gaudí and those associated with him, she obtained an introduction to the villa where the private chapel is, and sent us photographs so that we could authenticate the windows. There are two windows of modest dimensions, one with an image of the Archangel Michael (0.75 × 0.24m) [Fig. 1], the other a rose window in the façade of the chapel (diam. 0.9m) [Fig. 2], with a representation of the ‘biblical eye of divine eternal vigilance’ [Fig. 3].

Iconography The Archangel Michael stands with his hands together in front of his chest, holding a long ‘Claymore’ type sword.

Description The archangel stands against a blue background holding a long sword with a gold hilt trimmed with painted-on rhinestones, purple at the edges and dark grey in the centre, painted with enamel. He wears silver armour from head to foot: breastplate, pauldrons, couters and vambraces, skirt, cuisses, poleyns, greaves and sabatons. The joints of the armour are drawn in great detail and richly decorated in silver-stain yellow. Over his armour he wears a red surcoat covered with a rich floral decoration and fleurs de lys, also painted in silver-stain yellow and glass-paint. The hands are painted with sanguine and outlined with glass-paint, although there are parts where the latter has disappeared and left an empty space [Fig. 4].

The window is divided into three panels.

The upper panel is especially interesting, in that the torso and head are worked are worked in white glass flashed with both red and blue, etched away with acid down to the white in some areas [Fig. 5]. This flashed glass is a precursor of the trichromatic process that Gaudí used later in the stained-glass windows in Mallorca Cathedral, where the windows were made by the Amigó workshop of Barcelona, one of the most important workshops in Catalonia.

In the central panel the representation of the waist is made with red flashed glass, likewise etched away with acid as far as the white glass. Floral decorations and fleurs de lys are drawn on the red glass of the surcoat in silver-stain yellow and glass paint.

The lower panel is made with blue flashed glass, which has been etched away with acid as far as the white glass, on which have been drawn and outlined the legs, the poleyns, cuisses and greaves, as well as part of the wings with plumage [Fig. 6]. 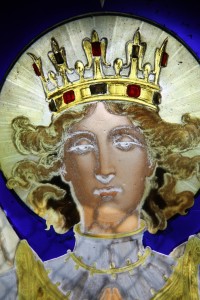 The authentication of this window is especially important, because the architect who gave the commission to the Amigó workshop was Antoni Gaudí; until now, these windows were attributed to Gaudí himself. J. F. Ràfols mentions seeing the designs in 1927 in the architect’s house in Parc Güell, but these were destroyed during the Spanish Civil War. In one of the most important studies of Gaudí, El gran Gaudí (published in 1989), Bassegoda refers to Ràfols’s comments, but treats them as relatively insignificant. Not until 2002 did Bassegoda (in his Gaudí o espai, llum i equilibri) put a date, of 1878, on these windows, following investigations undertaken by Ferrín, who collected orally transmitted memories from the Valls family, the former owners of the chapel in which the window are housed (Los vitrals de Gaudí en Vallgoguina, 2003).

But we think there is an error in Bassegoda’s dating. The window of the Archangel Michael belongs stylistically to the ochocentistes (‘nineteenth-century’) style as defined by Joàn Vila Grau (El vitrall en l’arquitectura de Gaudí’, Butlletí de la Reial Acadèmia Catalana de Belles Arts de Sant Jordi, XVI, 2002, pp. 43–51). Vila Grau says that Gaudí’s involvement in his windows at this period extended only to providing figurative and decorative designs, and choosing the glass-maker, who was then responsible for the style and technical aspects of production.

From the way in which the Amigó workshop functioned we have been able to establish the date at which work was carried out on the window of Archangel Michael. First we identified the executor of the window and compared it with other documented windows and their dates, such as the rose window in the façade of Montserrat Monastery (executed by the Amigó workshop in 1894). Flanking the latter window is a series of angel musicians worked in the same technique adopted for the Vallgorguina windows; the way in which the angels’ hair is worked is so personal and readily identifiable, that made it possible for us to date and identify other windows from the same workshop in the Church of the Holy Trinity in Vilafranca del Penedés, also made in 1894.

The Amigó workshop is one of the workshops most representative of Art Noveau in Catalonia. Influenced by Romanticism, they began to be interested in Gothic stained glass. Driven at the same time by industrial renewal, they initiated a search for technical methods that would obtain the quality and intensity of colour found in Gothic windows. These techniques had been lost over centuries of decline.

The windows were drawn by Enric Monserdà, as Dr Fondevila, a specialist in painting and drawing at the Museu Nacional d’Art de Catalunya, has demonstrated.

Rose window in the façade

Iconography In the centre of the rose there is a representation of the ‘biblical eye of eternal divine vigilance’ (or ‘God sees everything’) as the main motif [Fig. 7], drawn on the palm of a hand. Monograms are drawn on roundels for Jesus (in the upper section) [Fig. 8], Mary (to the left) [Fig. 9], and Joseph (to the right) [Fig. 10].

Description The rose with four roundels has as its main motif in the centre a hand with an eye drawn on the palm of a hand, representing the all-seeing God. The eye is drawn in brown glass-paint and takes advantage of white glass that is left exposed. The drawing is very realistic, with every detail of the iris, pupil and hand depicted, and volume and shadows implied. The monograms of Jesus, Mary and Joseph are drawn in silver-stain yellow and sanguine, the letters of the latter two intertwined. They are the same as those we found in the Boat of St Peter Window in Mallorca Cathedral, a work of the Amigó workshop of 1903.

This is without doubt a window designed by Gaudí for the Amigó workshop in Barcelona, and we were able to date it to between 1886 and 1902. There is a parallel, at least for the idea behind the window, with the three-dimensional Star of the East Window in the Bellesguard Tower, Barcelona, where the distinguished architect, ever in search for ways of expressing his ideas in glass, employed elements of metal and wood.