Until recently, very little was known about Hans Drenckhahn, a Swiss stained-glass artist and restorer. Despite his important work he was largely forgotten in the years following his death. During my internship at the Vitrocentre in Romont, I had the exciting opportunity to catalogue Hans Drenckhahn’s archive and to do further research into the man and his work. When I started, we knew little more than his name and age. We are fortunately to have this archive, the ‘Fonds Hans Drenckhahn’, which consists of 146 art folders containing approximately 1,200 sketches, tracings, drafts, preparatory drawings, patterns and notes, which are mostly signed and dated. This assemblage of primary sources allows us to gain an insight into the artist’s life and work. The name of the artist had already appeared in several books in relation to important restorations, but it had not previously been possible to put his work into context.[1]

So who was Hans Drenckhahn?

Hans Drenckhahn was the eldest of the three sons of the glass-painter and painter Heinrich Drenckhahn. Hans worked as a glass-painter and heraldist, but is mainly appreciated now as a glass-restorer. From the signatures on his works it appears that he must have had at least two studios. The first one, probably run together with his father from whom he learnt his trade, was situated in Basel. The second was in Thun (Bern canton), where he worked throughout his career. He did not have any employees or assistants and always worked on his own. Exceptions were his father and his younger brother Gustav, who also worked as a glass artist: signatures of all three can be found in the archive. Hans Drenckhahn married, but did not have any children, which is presumably why he chose to sell his studio before his death. Unfortunately, no further evidence of his work has been found.

Why is he so important for research into Swiss stained glass?

Hans Drenckhahn was known as a very accurate restorer. This is shown by the quantity and quality of the commissions he worked on. For example, he was engaged by the director of the Bernisches Historisches Museum (BHM) to restore some panels. The first dated restoration demonstrably by Hans Drenckhahn is the example shown below; the restoration dates to the year 1913. He also restored the extraordinary ensemble of stained glass at the town hall in Stein am Rhein, which consists of two cycles, the so-called Klosterzyklus and the Stadt- und Standesscheiben cycle, during the years 1914–20. In 1934, he restored the entire glazing of the church of Sumiswald near Bern. He also worked on many other panels and windows throughout Switzerland, southern Germany and probably also some in France. 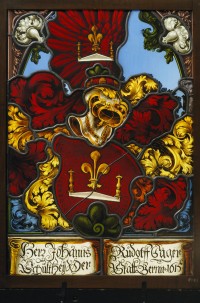 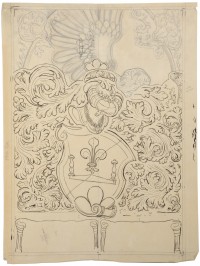 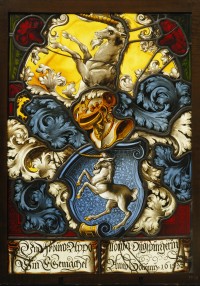 It is likely that he earned his good reputation during the time he worked with his father in Basel. His father worked until 1906[2] and had himself already participated in important restorations, such as that of the glazing at the abbey church at Königsfelden. Heinrich also restored important windows such as the heraldic panels at the Schützenhaus (civic militia headquarters) in Basel, where Hans was probably able to participate as well.

The Fonds Hans Drenckhahn fills an important gap in our knowledge and shows us how the artist worked. It was particularly interesting to discover that Drenckhahn used ancient techniques to restore ancient windows so that they maintained a more authentic appearance. The following is an example of his work, in which we can follow the different steps of the restoration.

Fig. 1 shows the heraldic panel of Hans Rudolf Sager with the restorations by Hans Drenckhahn. Fig. 2 is Drenckhahn’s tracing, showing his detailed sketch for the planned restoration; the upper part is pin-pricked for transferring the tracing. Fig. 3 shows the heraldic panel of Appollonia Augsburger, originally the pendant of the Sager panel, which provided the inspiration for Drenckhahn’s historically accurate restoration. In Fig. 4 are fragments from an earlier restoration of 1824 by an unknown restorer, which were removed for not being historically accurate. Fig. 5 is a detail from Drenckhahn’s more authentic pin-pricked tracing, showing how he actually executed the restoration.

The Fond Hans Drenckhahn has proved to be a treasure for research into the restoration of Swiss stained glass, and there is without doubt still much to (re-)discover in Drenckhahn’s archive.